It's quite odd to be reviewing a camera that is now five generations old. The D50 is actually a very noteworthy camera for Nikon. It was their first full consumer dSLR. It was also their last sub $1,000 dSLR with an in body motor to focus AF-D lenses. What it has: plastic construction that will seem great if you are stepping up from a point and shoot, 6mp sensor with a native ISO of 200 and a frame rate of 2.5fps if shooting jpg, dropping to 2fps for raw, one rear command dial. By today's standards the rear LCD is small and of low quality. But for in field use it is totally sufficient as it has a histogram. Thoughts on a few key points:


6mp: Despite all the hype of high megapixel cameras, unless you are doing massive prints or cropping, six megapixels is still sufficient. It's enough for a cover shot on any magazine in the industry. 6mp on a learning camera is ideal because it will teach you to crop with your position and lens, not in post processing. It's also very forgiving on lenses, the cheap  kit 18-55mm and 55-200mm Nikkors will look gorgeous on the D50. Think Sony's new 24mp APS-C sensor will look gorgeous with a $100 lens? Think again.

2.5fps: The slow frame rate is a hindrance to shooting sports. In kayaking you'll be shooting for one perfect moment, not sequencing a whole drop. The plus is that it will teach you timing and anticipation.

One rear command dial: This ended up being my largest issue with the camera. It takes a button push and rotating the rear dial to adjust aperture. Not something you can do easily with the camera held up to your eye, and a big downside.

If you are looking for your first dSLR and have a tight budget, I'd highly recommend the D50. Except, for some odd reason the model above it at the time, the Nikon D70, goes for less on the used market and can shoot raw at 3fps.  It uses the same sensor, but is slightly larger and has a front command dial too. With used prices hovering around $200 as of September, 2011, you can pick up a D70, 18-55mm, 55-200mm and 50mm f/1.8 AF-D for the price of the newest consumer body. Something to think about. The largest drawback is the slow frame rate, and inherent trait of all consumer dSLRs (except the Sony A55, which shoots at 10fps forces the lens wide open and shoots in auto only). If the D50 or D70 shot at a higher frame rate, I'd still consider using one for work on the river.

On a random note, the D50 does an amazing job rendering .jpg files. I always like the jpgs from the camera better than the raw. I liked the D50 jpgs much more than the D200 jpgs. Something to consider if you are not going to be shooting raw.


My first image ever sold, with the camera set to auto: Taylor Robertson in National Geographic Adventure. 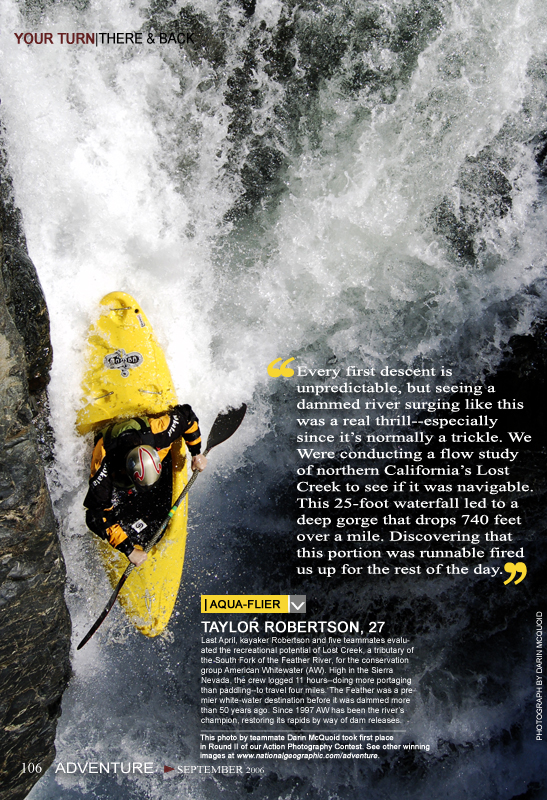