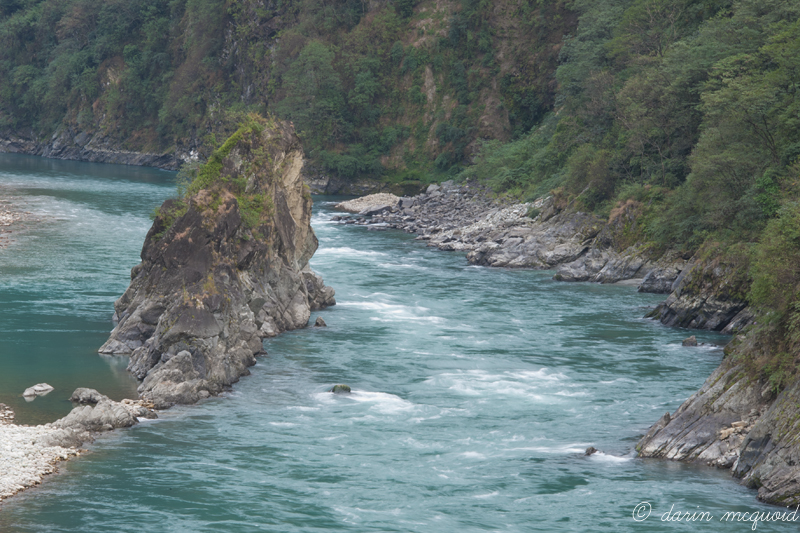 The Lohit River flows  from high Himalayan headwaters in China and enters India at its Eastern most point in Arunachal Pradesh. The state of Arunachal Pradesh borders Tibet and China, and is a sore point for China, who still claim ownership of the state. India is of course a massive country, and getting to its easternmost point is no small task and the most dangerous part of the trip. This area of the world has by far the most sketchy driving conditions I've ever seen. Right of way is dictated by size, and it's not uncommon to see bicyclist run off the road. 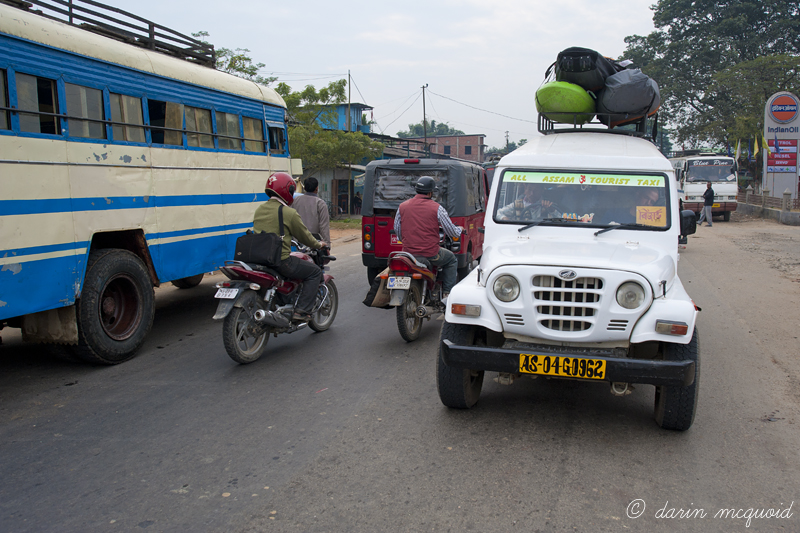 From the nearest airport it's still a full two day drive to reach the Lohit River, thankfully the scenery in India is always entertaining.  Scouting doesn't seem quite as appealing when you see these hand sized spiders hanging out... 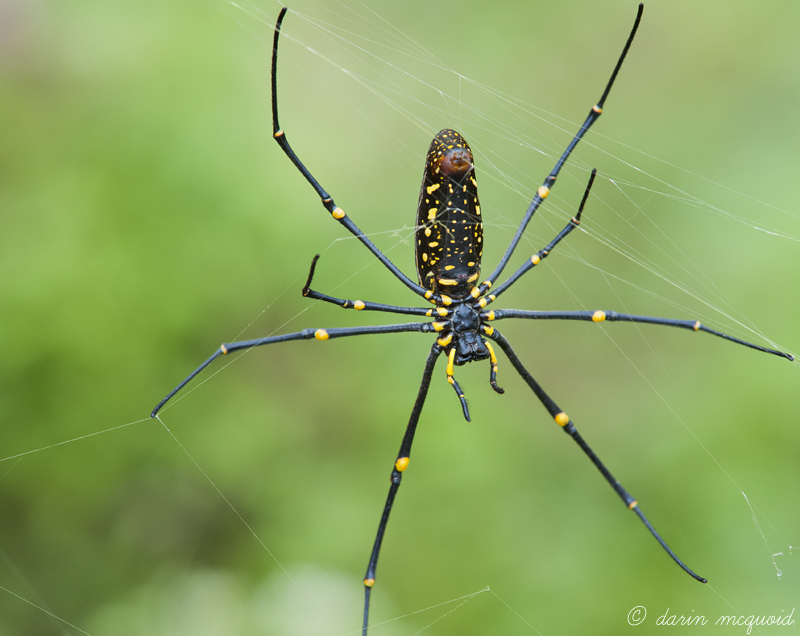 The Lohit can be broken down and done as a two day run, or extended to four days. We mused over the options on the way up, and stayed the last town before the Chinese border. The small village had one hotel and marks the upper take out. Below this the river is pool drop class IV, but takes only slightly longer to kayak than it does to drive to the lower take out. We decided to maximize time on the river and out of the car, utilizing the lower take out.


Locals quite excited about their concrete work. 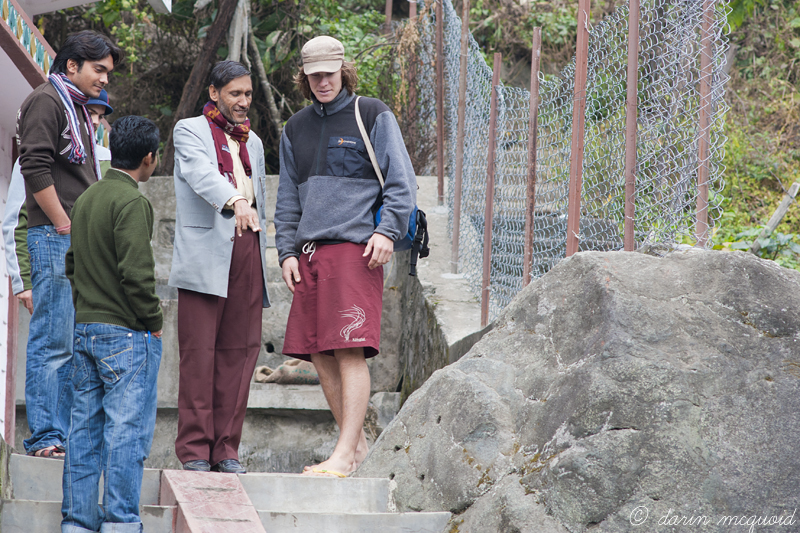 Paying our dues with more driving. The heavy Indian Army presence in Arunachal Pradesh can't be ignored. I'd imagine it's just as thick with the Chinese Army on the other side of the border. 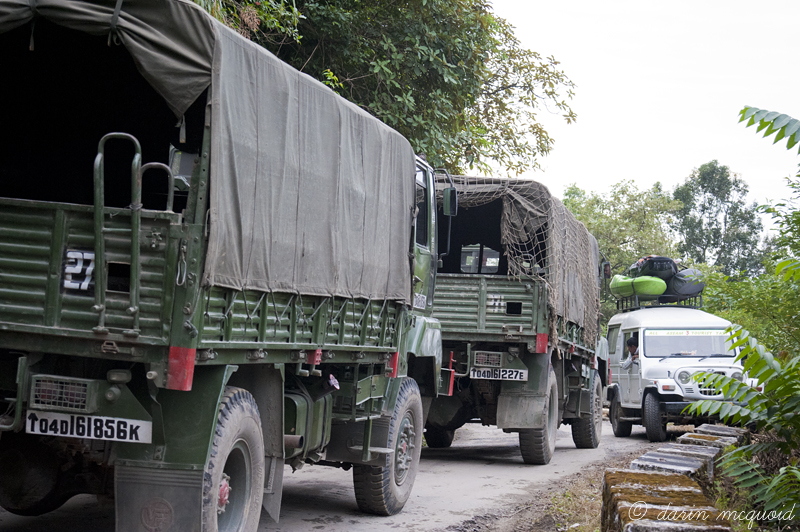 Packing up at "Garam Pani" 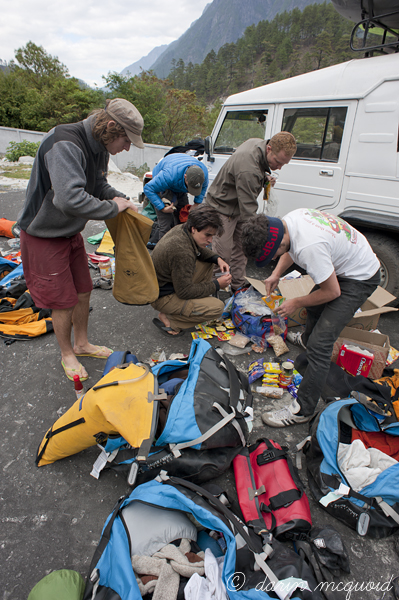 The Indian Army has an outpost right near the border, and getting past it to the put-in requires a bit of blind luck. Sometimes it's possible, often it's not. We packed overnight gear and left it at "Garam Pani" (Hot Water) a hot springs that is being developed into a resort. With our fingers crossed we headed a few kilometers further up the road and breezed past the little checkpoint without being flagged down. With luck on our side we quickly hurried down to the river and put on to 4,000-5,000cfs of beautiful turquoise water. The river bed had changed since the last time anyone in our group had seen it, and we found everything to be fun big water read and run IV-IV+ down to the hot springs.


Daniel Migoya gets his first taste of Himalayan whitewater in a beautiful setting. 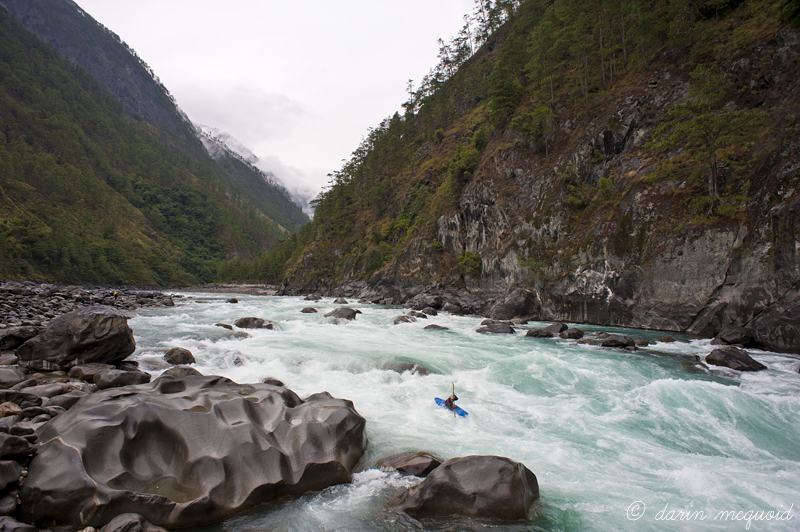 Our first night on the river we picked up our gear at the Garam Pani hot springs and camped there next to the springs. The following two days were full of big water read and run IV-V with the occasional larger rapid mixed in. Overall we scouted five times and had no portages, running an innumerable amount of fun rapids. Words come nowhere close to doing this river justice. No big pools but tons of big (but not too big) rapids.

Rafa Ortiz on the Lohit. 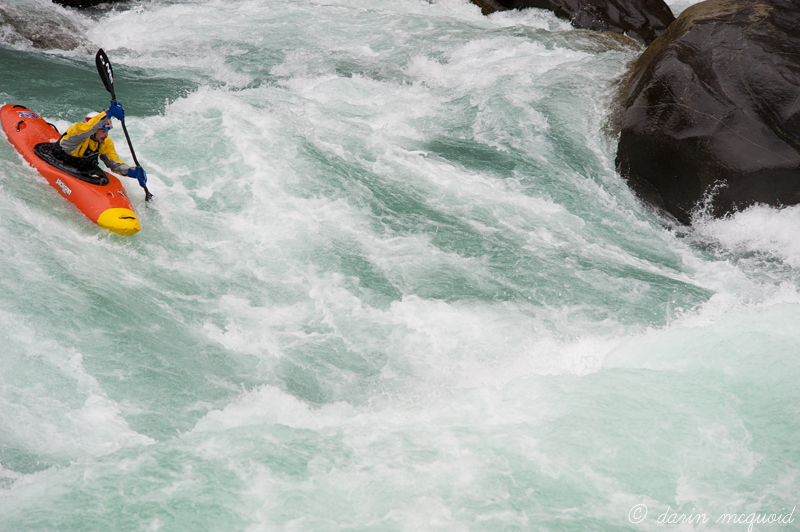 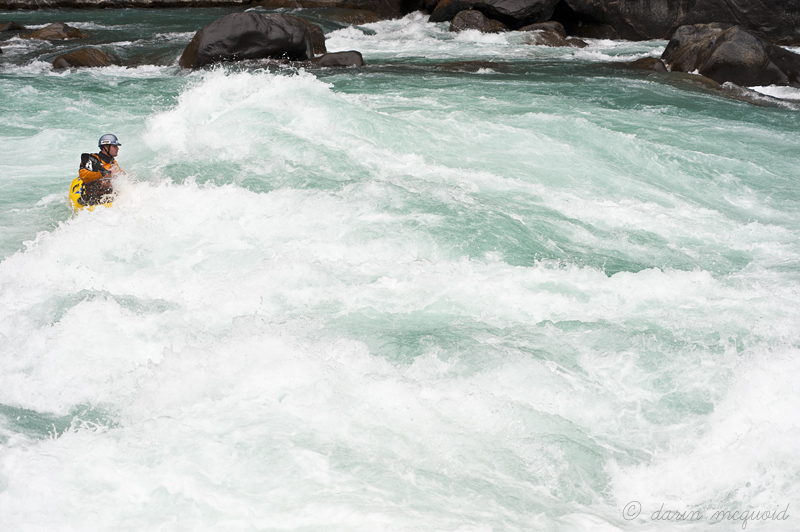 It just feels so good! 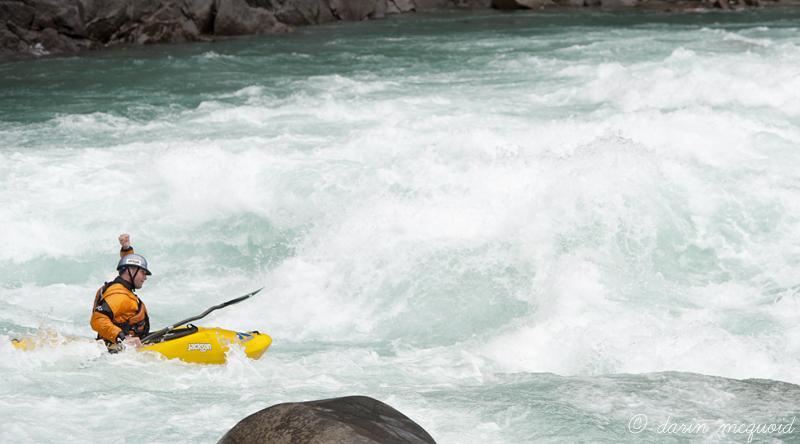 One after another, all day long. Daniel Migoya and Chris Korbulic. 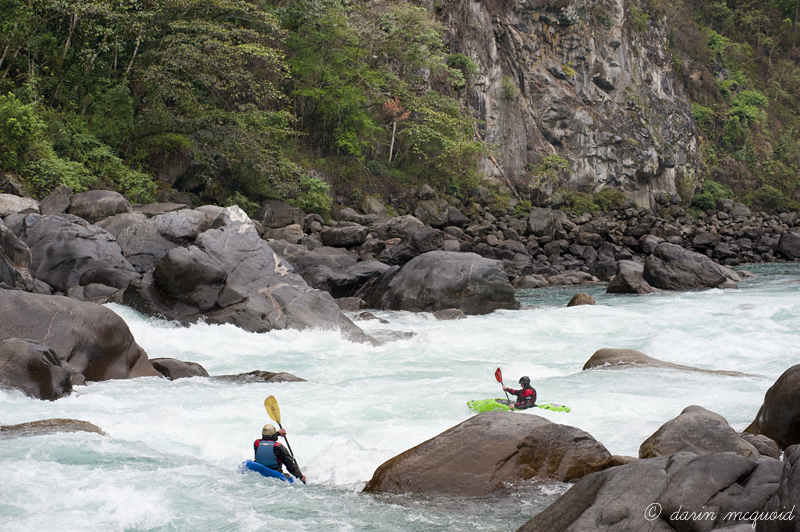 A little panning action as Rafa Ortiz runs one of the many boulder gardens. 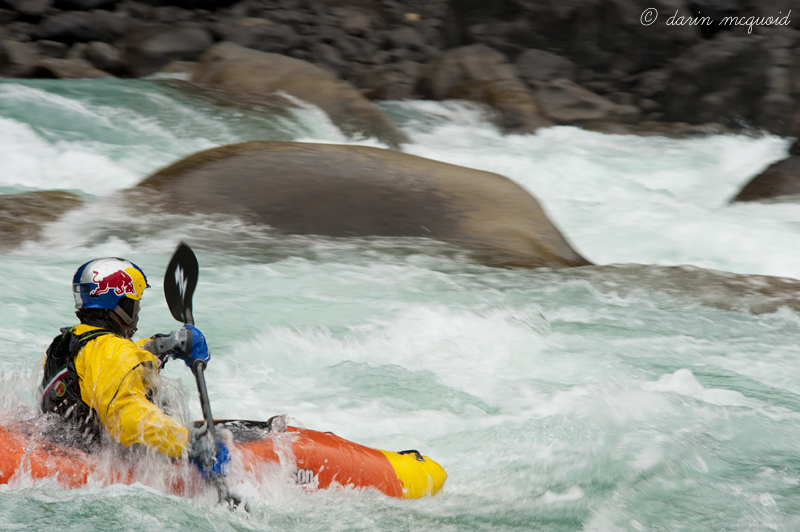 It's amazing. Despite the fact the road was miles away and we were on a remote river, every time we stopped for lunch or camp, people appeared out of nowhere. 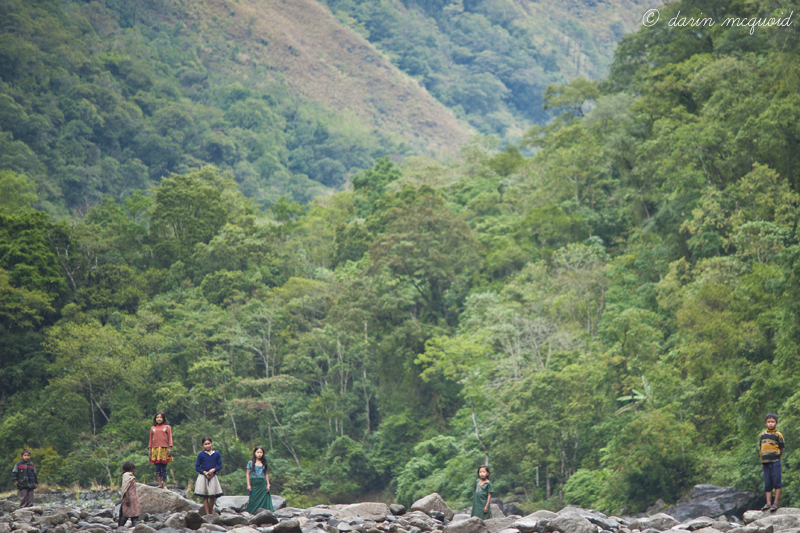 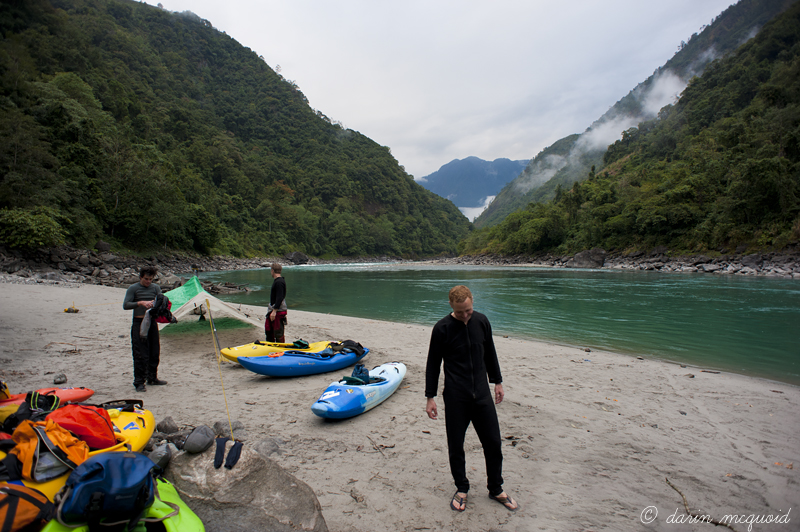 It's quite damp in this part of India and tough to get a good campfire going. 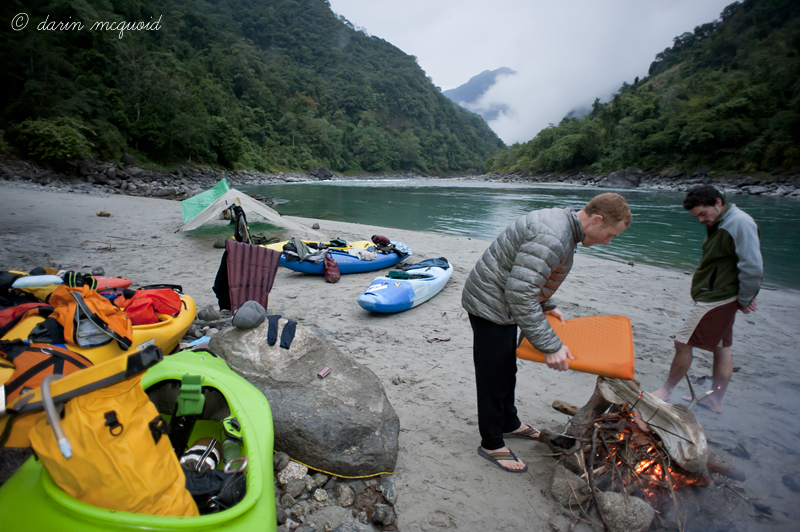 Rafa Ortiz gets into a curler and around a hole. 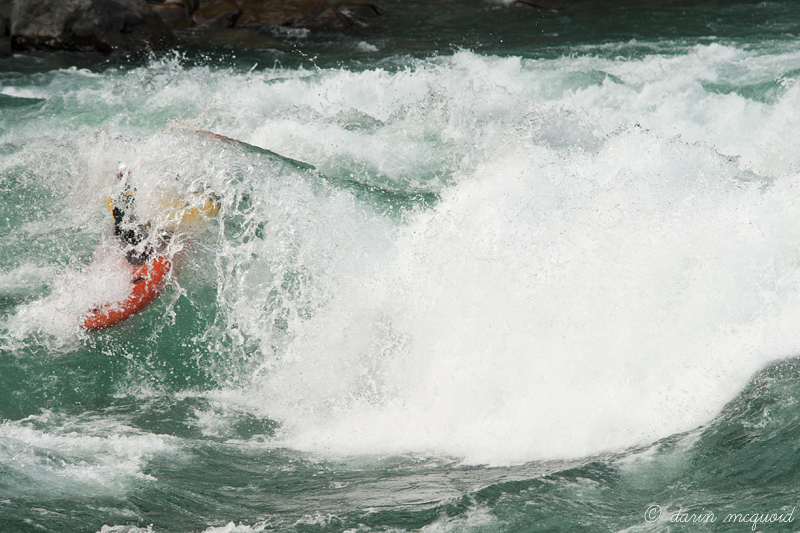 Rafa about to go deep in one of the Lohit's trademark drops. 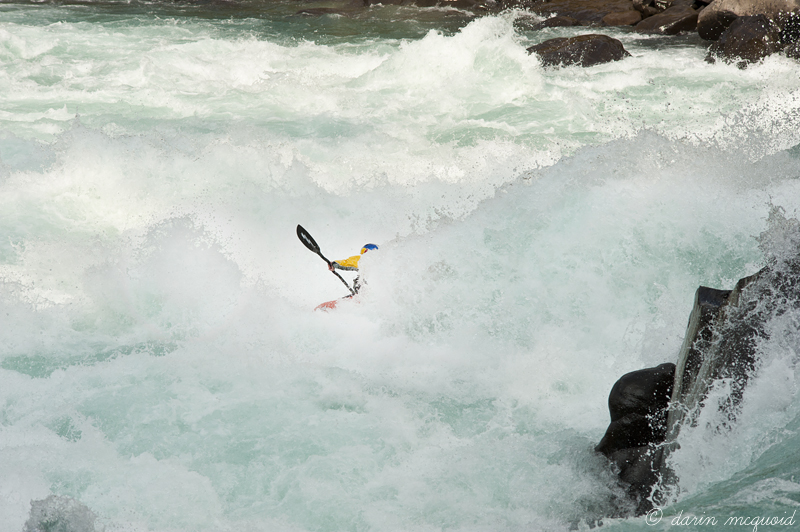 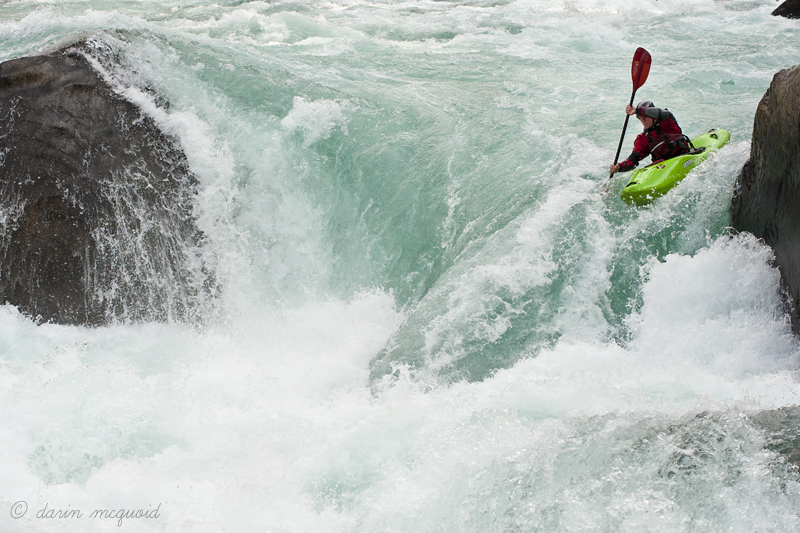 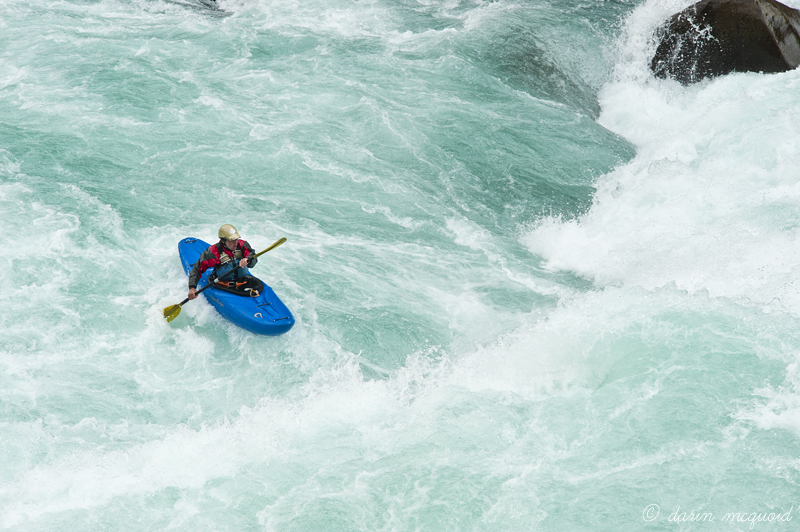 Rafa Ortiz enjoying one of many good rapids on the Lohit. 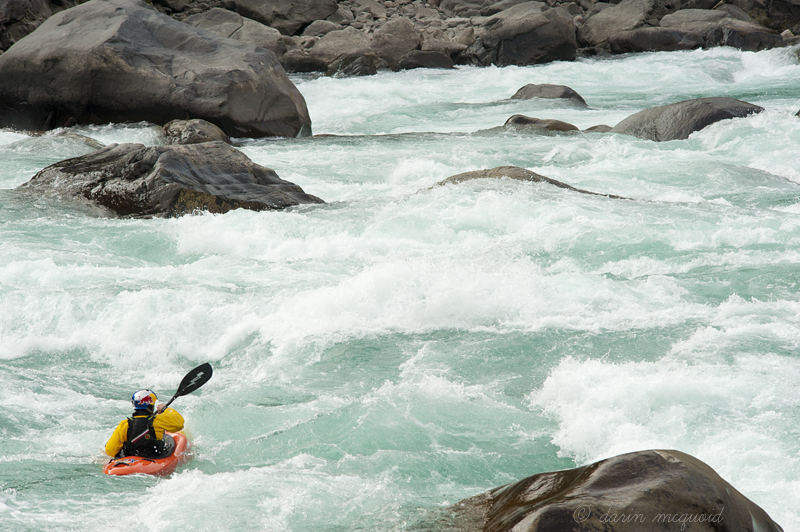 Although there are no major tributaries pumping water into the Lohit in this section, by the end of the third day the river has grown to nearly 15,000cfs. 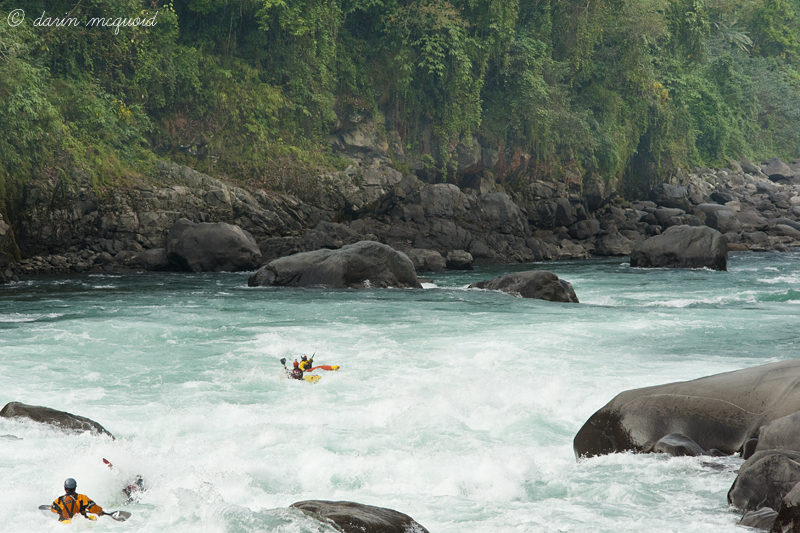 Rain is common in the afternoons and night. 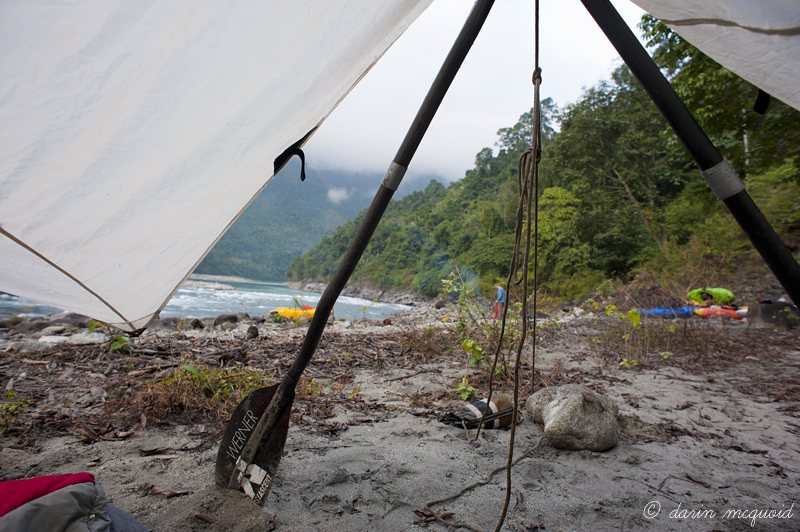 The last day of the Lohit has some big flats unless you take out at town. Since paddling it only takes half hour more then driving around, staying on the water is the way to go. The scenery stays top notch and rapids scale down to III-IV with some big pools. 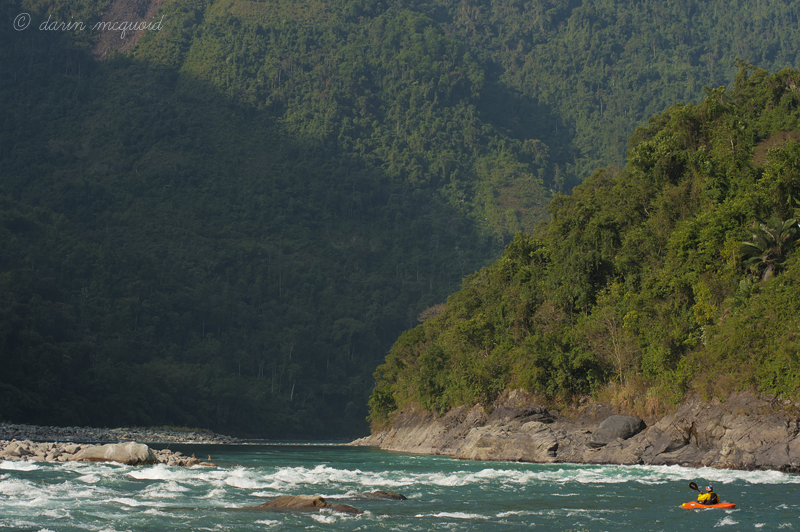 If there wasn't so much else to kayak in Arunachal Pradesh, we'd go back for a second lap. 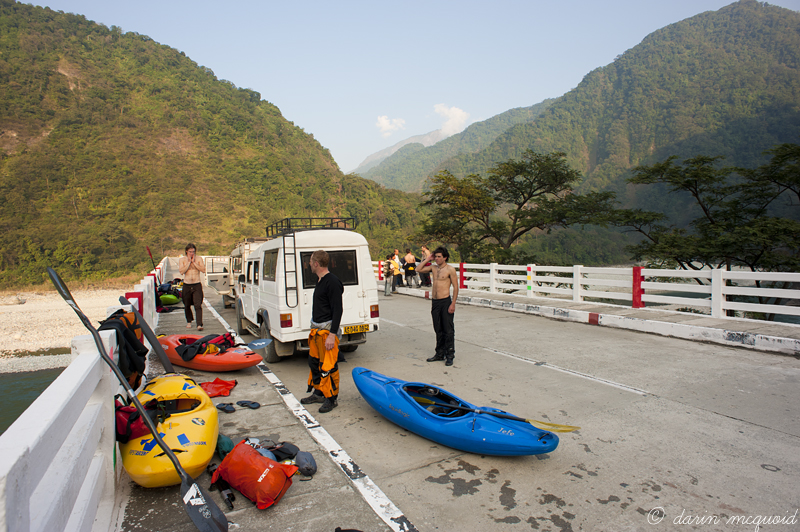 This section of the Lohit River is easily one of, if not the best multi-day trips in the world. More than enough rapids, no mandatory portages and only a handful of scouts. Clean clear water and friendly local people. It doesn't get much better than this. The river is best run in the fall when it is low, spring and summer flows would be terrifying. If the Lohit is on your radar or to-do list, I'd suggest going sooner rather than later.  Engineers have already been at work and marked out a dam location just upstream of the bridge, so get it while you can. Thunder Bow Expeditions has a map if you're wondering where it's at.