You drive over the Marble Fork Kaweah then Clover Creek, all while in route to run Clover Creek,. This crossing of Clover Creek is a quarter mile below the standard hike and slide section of clover creek. Looking upstream it all looks terrible, steep boulder garden mank filled with wood and willows, yet the downstream view is enticing with a nice slide.


Looking down Clover Creek from Highway 198. 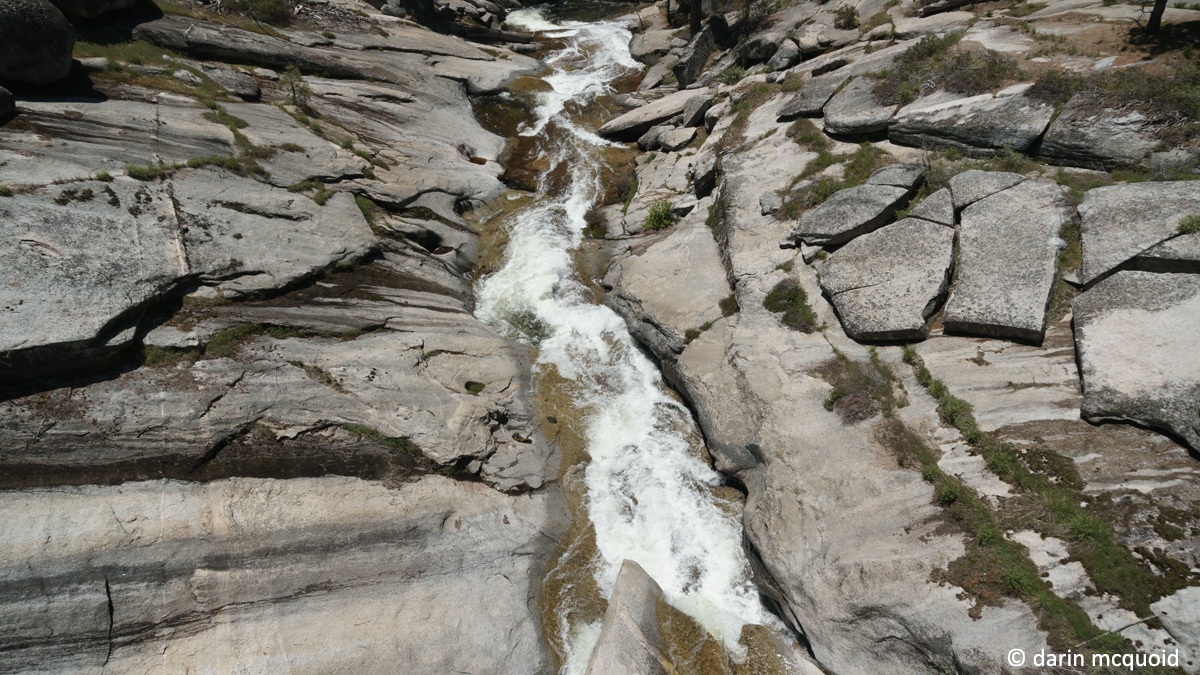 In the spring of 2016 we ended up running Clover Creek several times and the downstream view was calling. So it was time for Google Earth and topo map research. In just a quarter mile the creek makes a three hundred foot drop into the Marble Fork of the Kaweah. There probably wouldn't be too much we could paddle at 1200 feet per mile, yet it lookes like there are some slides, so hopefully we can pick off a drop or two. At worst it will be an interesting hike.

Once we reach the confluence with the Marble Fork we can hike back up what we came down, or head upstream a half mile on the Marble Fork, or stay true to kayaking and simply continue down the Marble Fork. I'd remembered local paddlers Chase Hauber and Logan Marlow mentioning having done this section of the Marble Fork and they said something about some slides, granite and a steep section. Looking at maps the Marble Fork drops an average of 200fpm for three miles. As a bonus we will already be partway down it, so maybe it'll be less than three miles. Typically 200fpm on a small creek can be done at one mile an hour. Having done the Lower Marble Fork in 2009, my interest is high to see this section, which is above the portage section that starts at Crystal Cave Road, which will be our take out. Sure would love to know if they got the proper permitting for commercialy filming that one.

Waking up in Three Rivers we fell victim to the inverse law of location. The closer you live, the later you are. Ben Blake, Robbie Gilson and I had already paddled together several times and were operating well as a team, so I wasn't too worried when we make it to put-in at 11:30. Yes, the gate on Crystal Cave road (take out) will close in the afternoon, but we still hope to make it to take out in ~4 hours. Three miles, 200fpm, nine hours of daylight, what can go wrong?

Sorry for the quality of photographs, I'd decided to film this day and these are pulled from video


12:00pm; Ben Blake on the entrance slide. Flows have dropped a lot in the last week, but that is good considering how steep this section is. 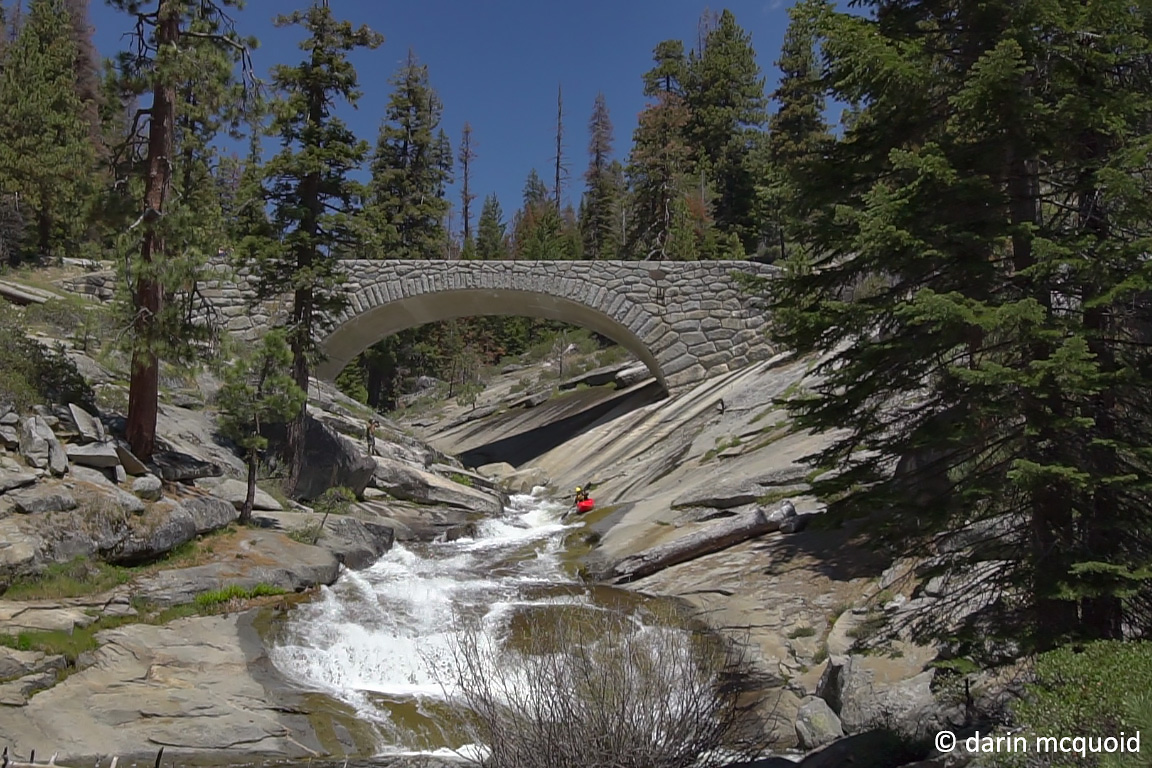 Robbie Gilson enjoying the same great start to the day. 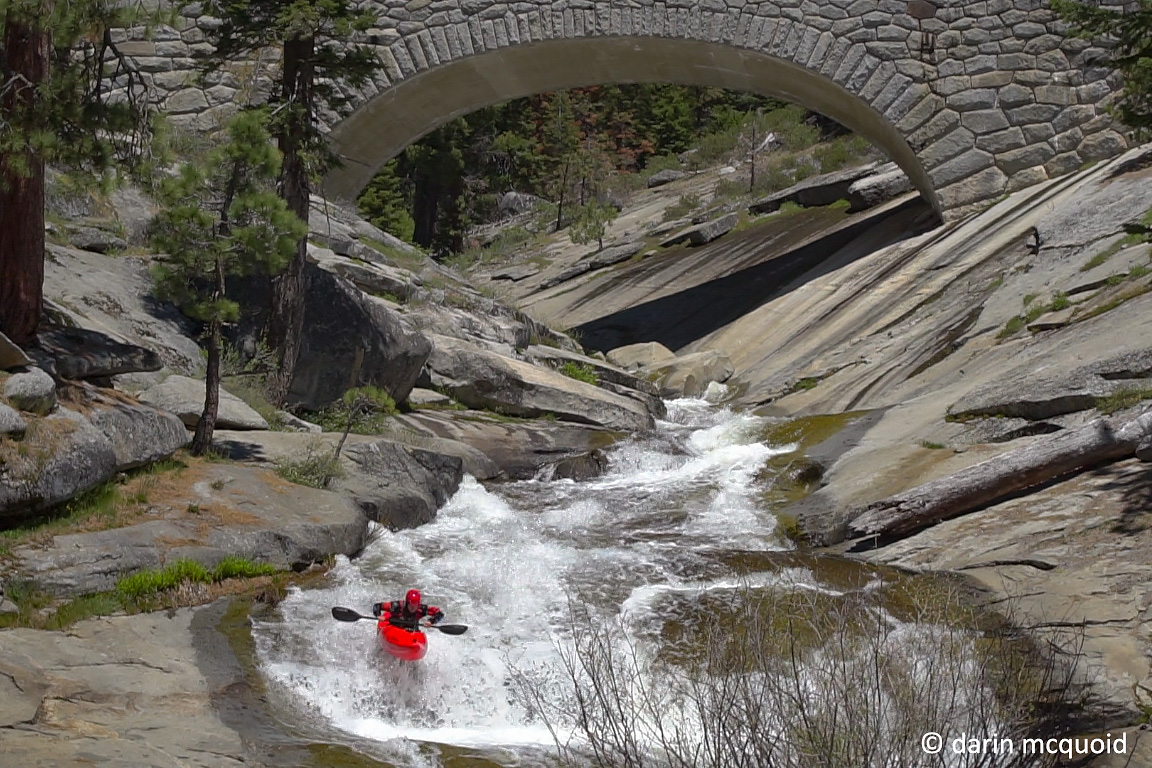 Downstream, well it wasn't all slides. Thankfully Robbie and Ben are comfortable on uber steep mank, and away Ben drops through one steep boulder garden. 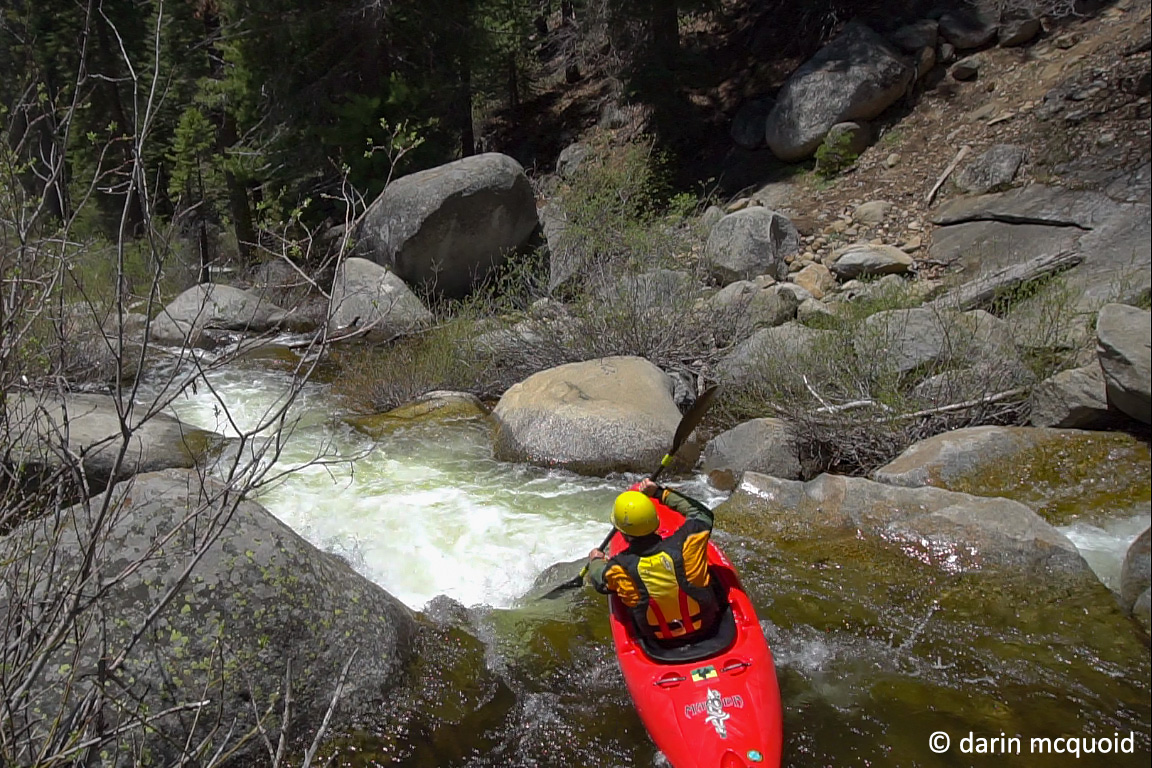 Eventually we're forced to portage around a mix of wood, brush and small boulders. The portage lasts only about fifty feet, then the creek goes down a long side. At the end is a must make eddy above a final twenty to thirty foot falls that lands on rock. Robbie decides to give it a go while Ben and I do safety and media.


Robbie Gilson at the top of the sequence. 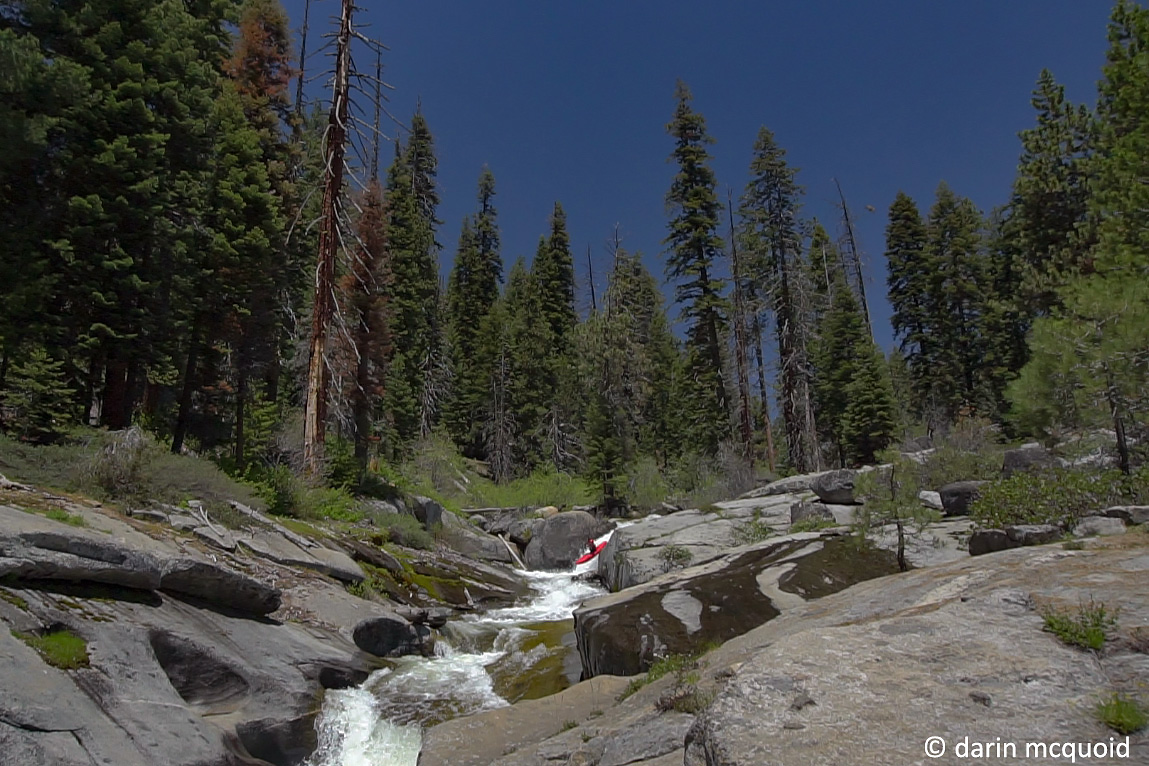 Robbie navigating through some teacups. 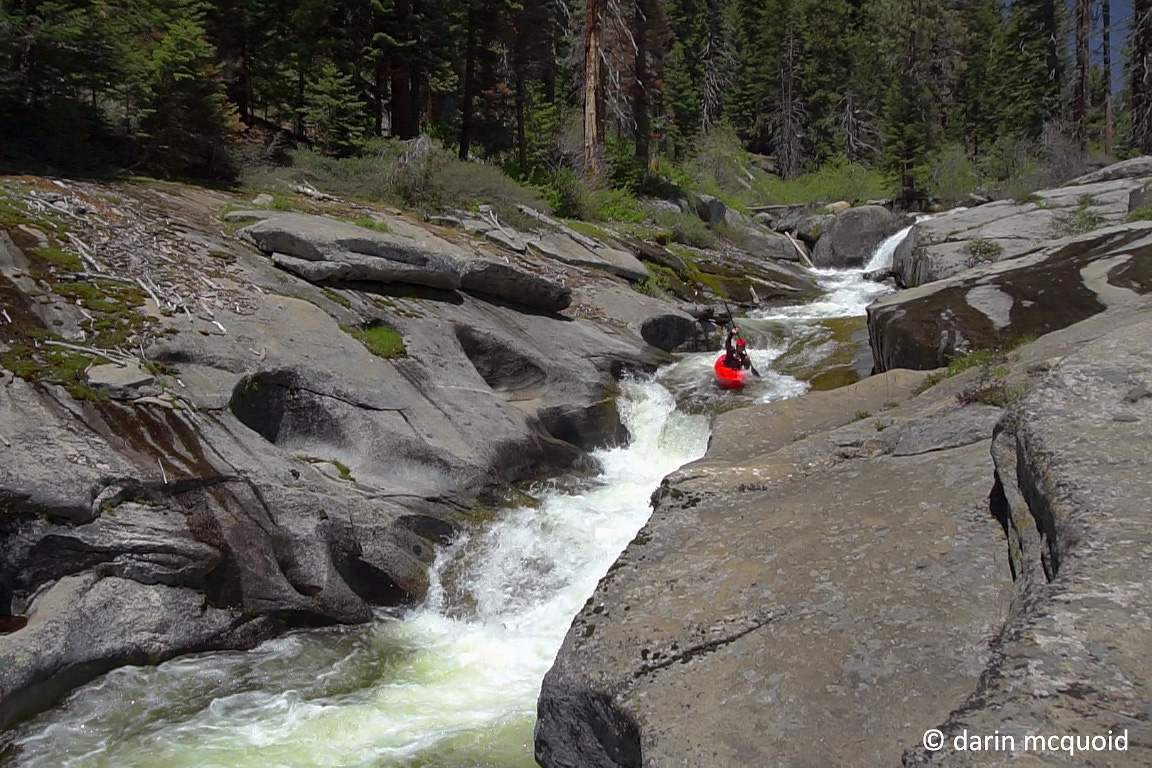 The final move before the falls. 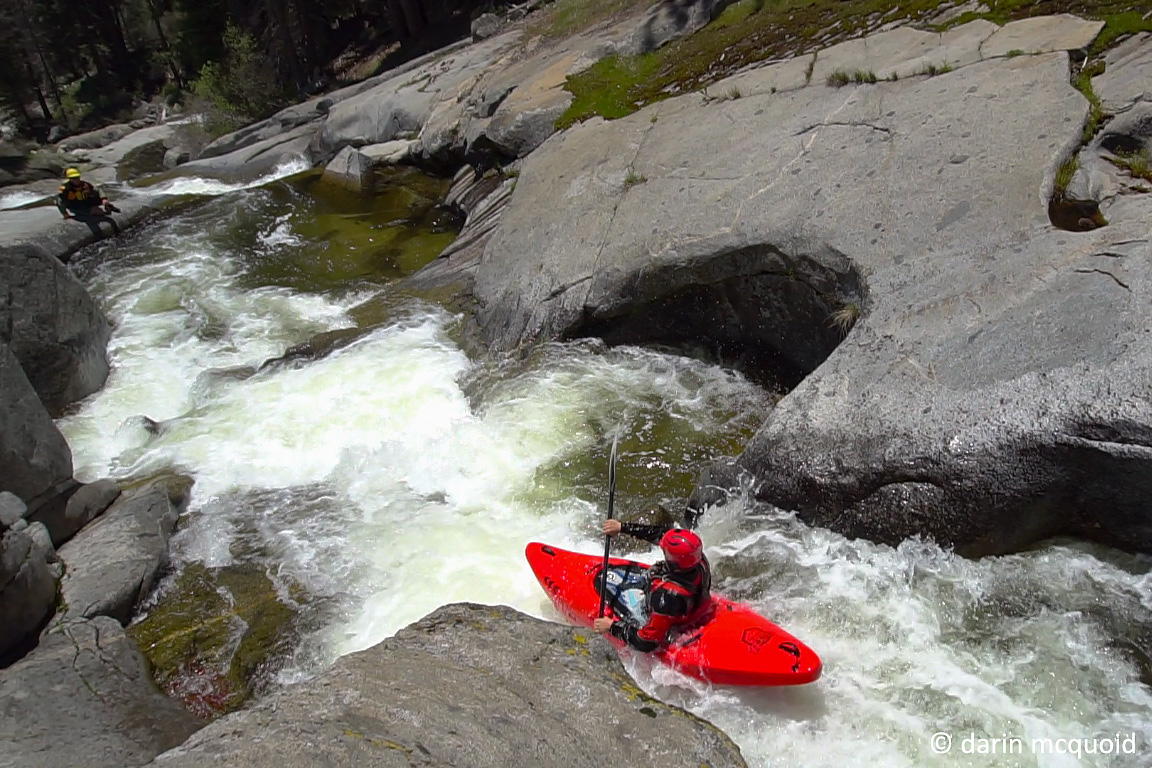 Once Robbie is out we all make a quick portage of the falls and laugh about how if it was in the Southeast someone would have run it by now. 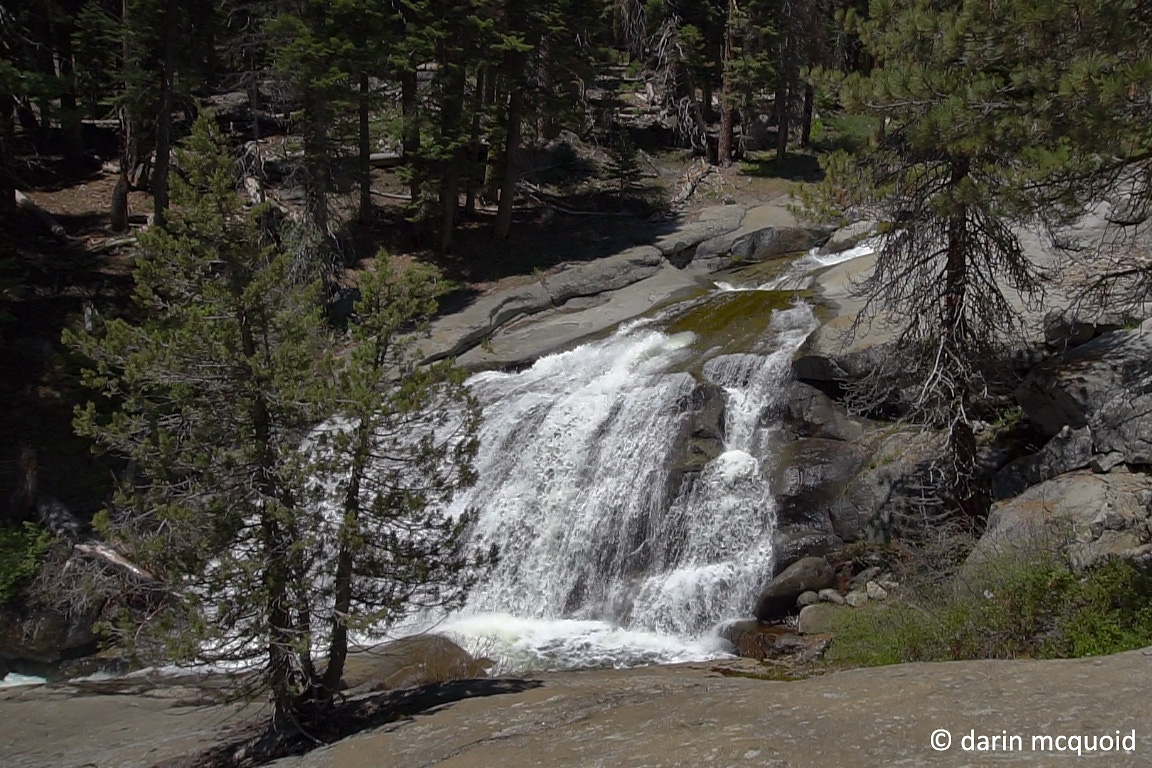 All smiles, the portaging is easy so far. 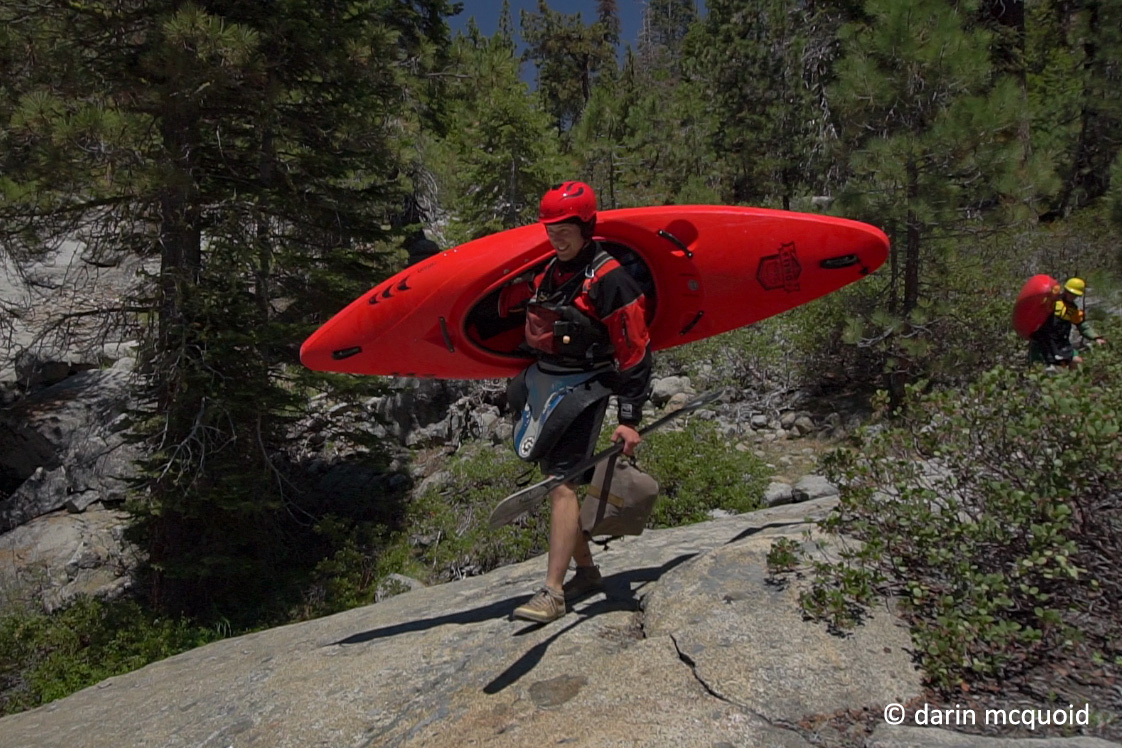 The portage continues more or less to the confluence with the Marble Fork. Spirits are high, as Clover Creek was much easier to navigate than expected; no rope work or technical portages. I'd thought this section would be the most demanding of the journey and it's a relief to have cruised through it. Spirits are high as flows double and the first section of the river is read and run.


It's now just before 1:00pm and we take turns scouting when necessary, still making good time and running some great rapids. Robbie Gilson avoids an undercut. 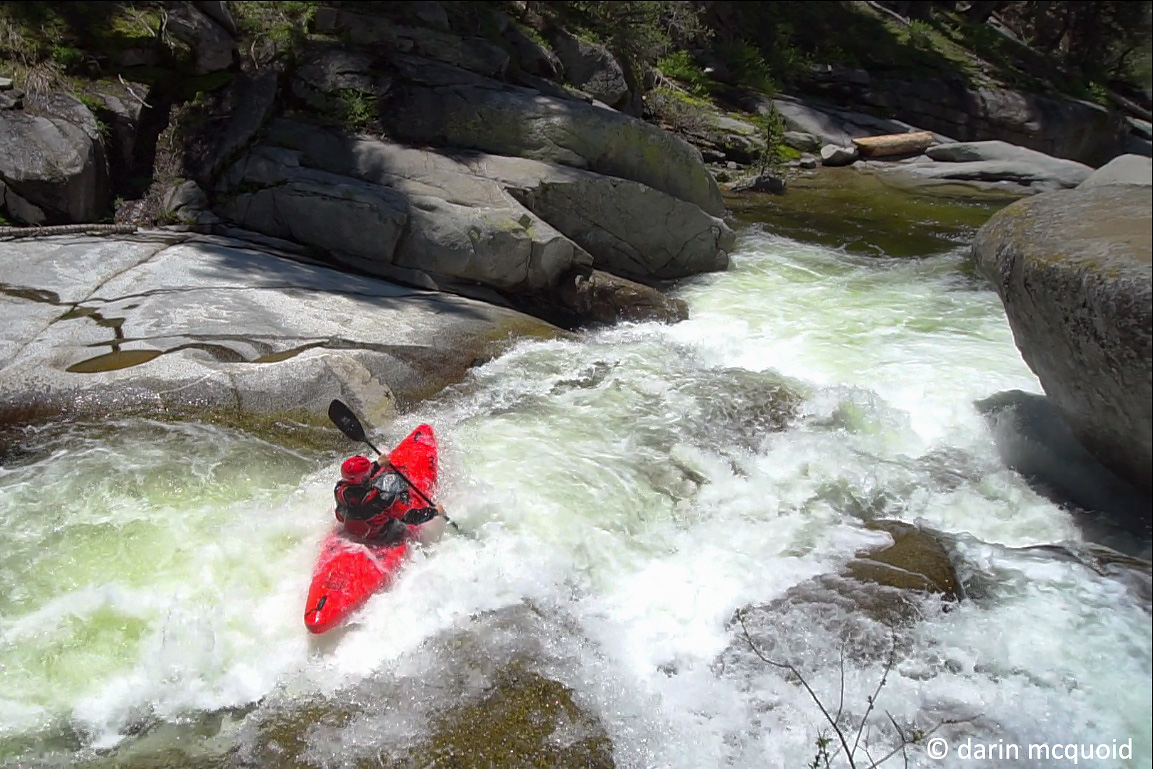 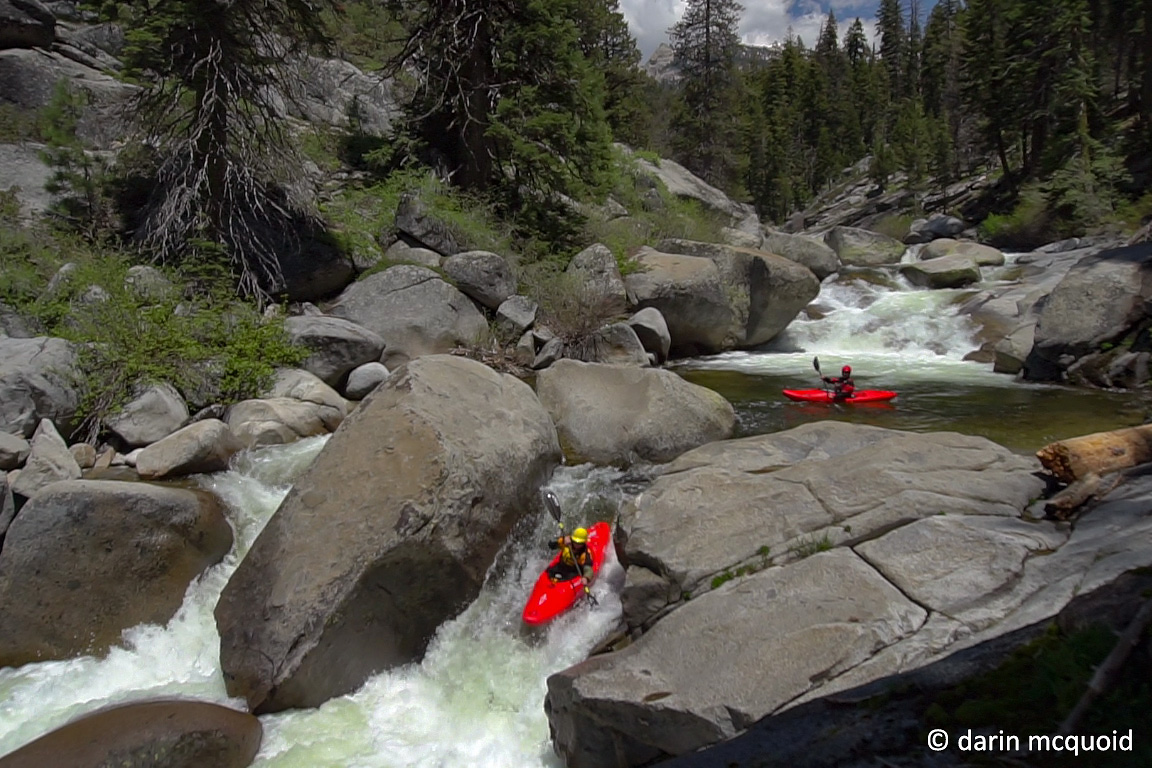 As we continue downstream the river gets steeper, yet retains classic character. So far it's much better than we'd imagined. Ben Blake in the middle of a nice combo. 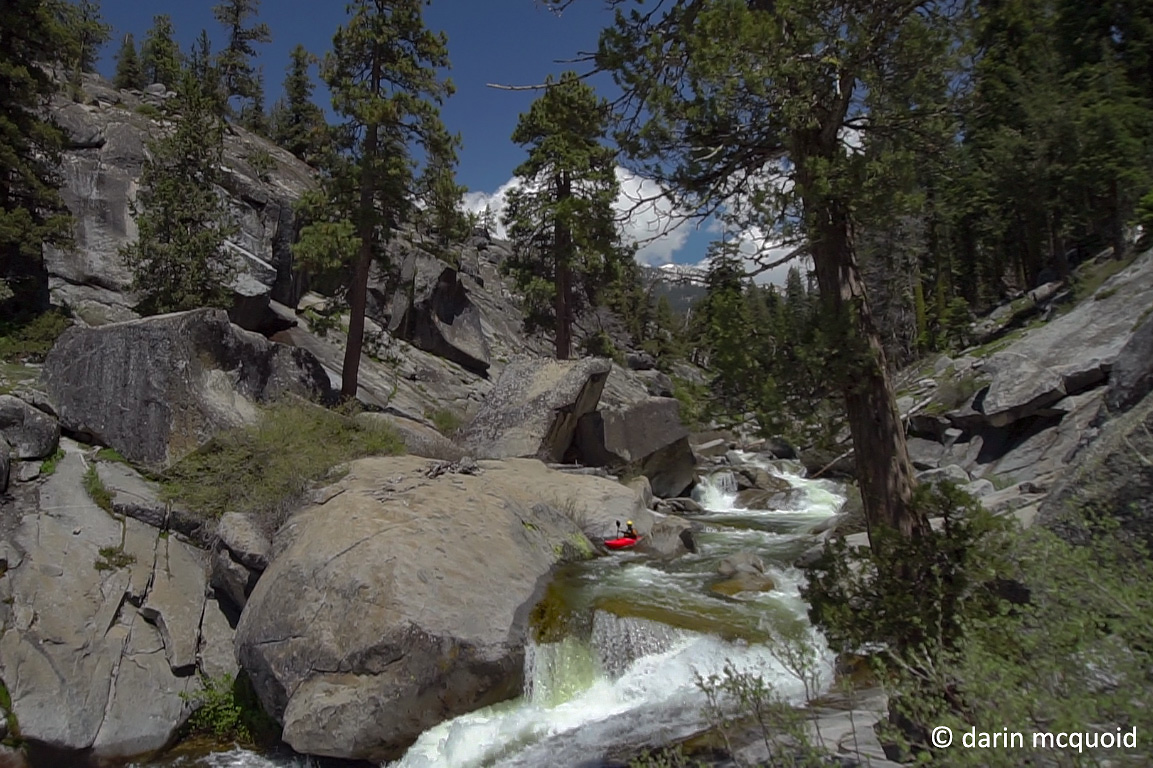 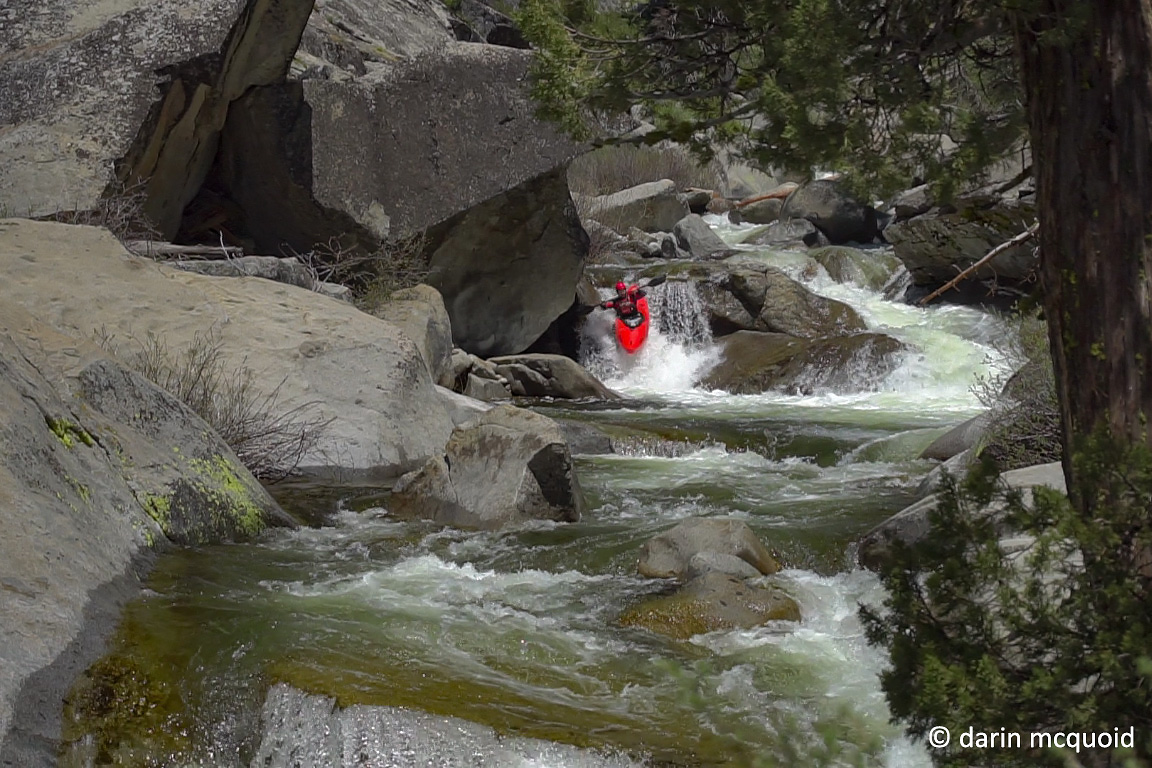 Robbie boofing into the second half. 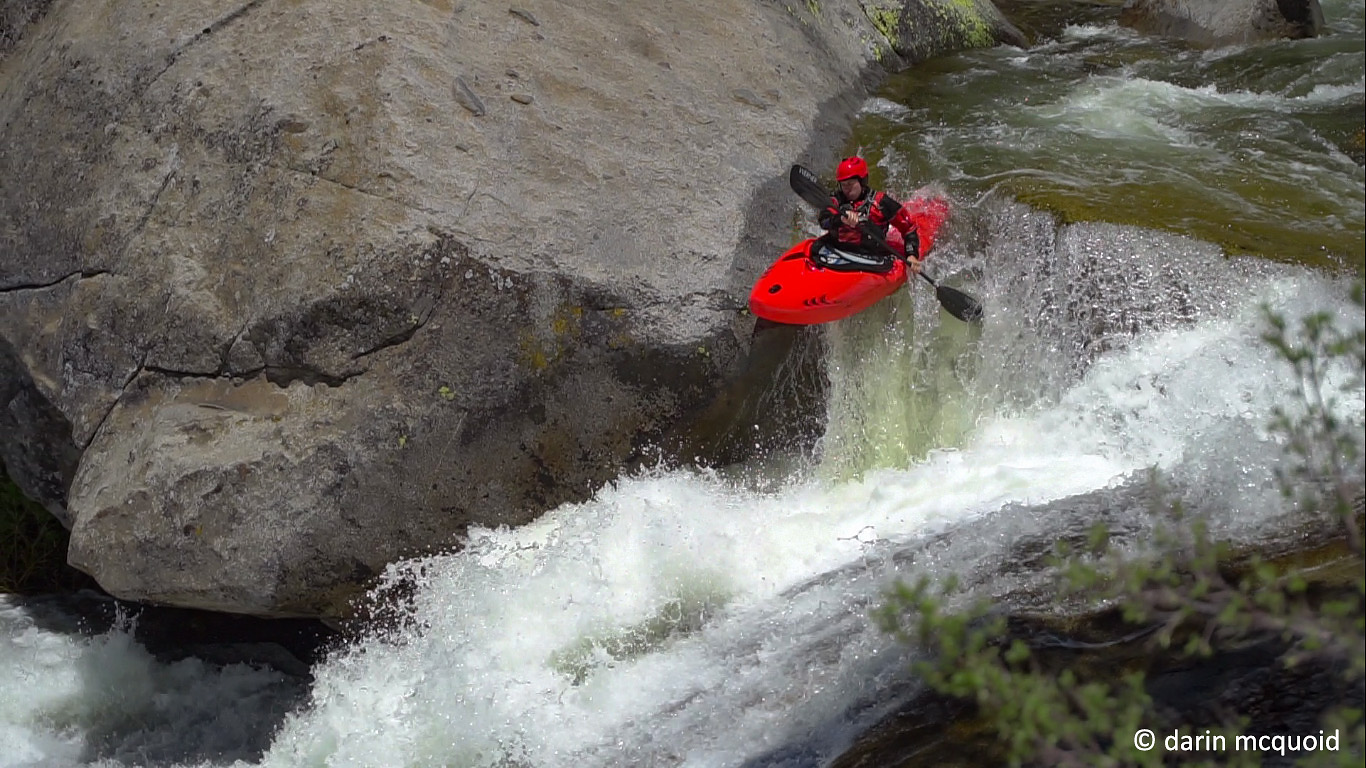 Ben with a nice skip to finish the slide. 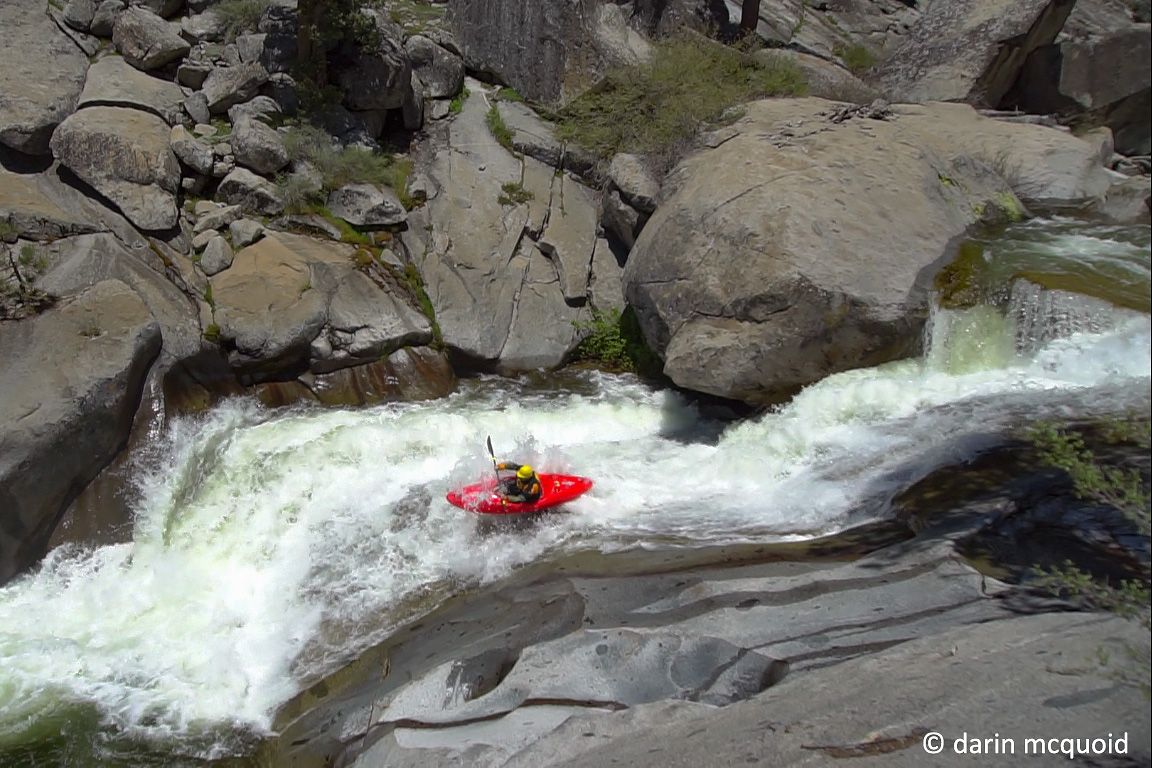 Now we're laughing. This is a classic section of river, and we're not just seeing through the "exploration glasses" that tend to make things seem better than they are. Robbie Gilson enters yet another high quality rapid. 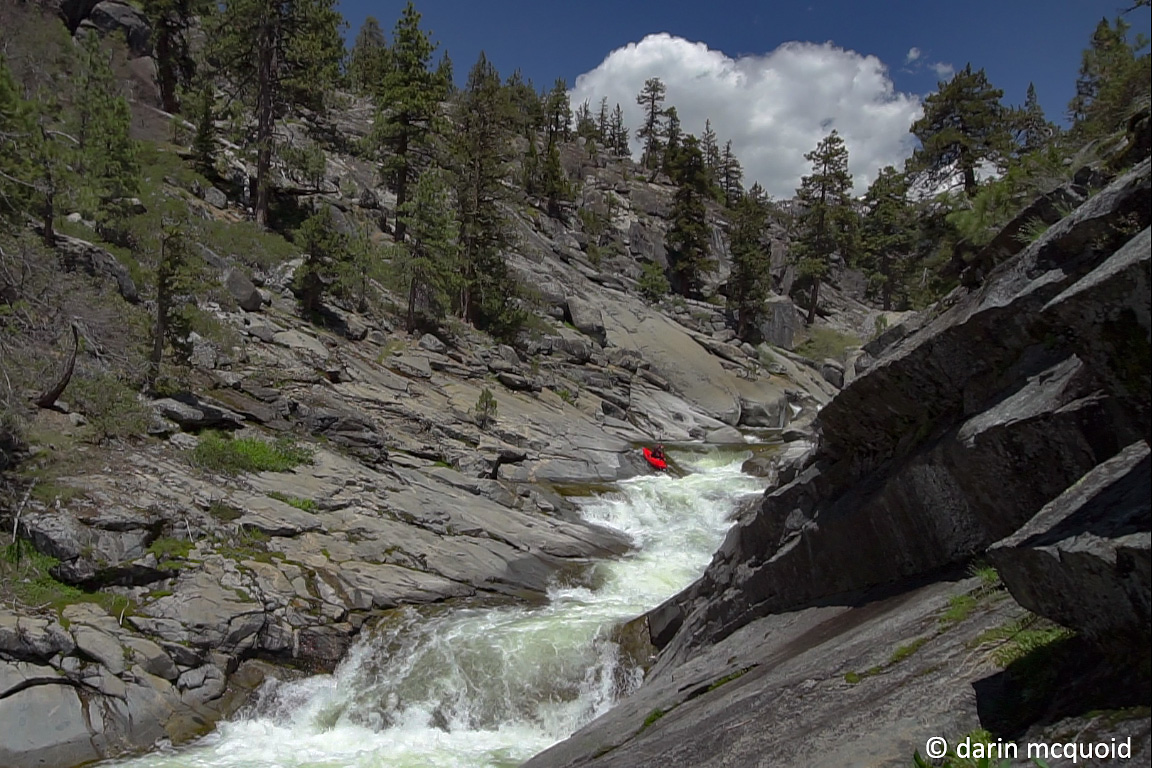 Brush obscures the next horizon and we scout on both sides. It's not looking too good from the top, the right side is just terrible and the left looks questionable. I've been expecting to portage any second and am not too surprised, yet more scouting reveals this drop is actually good to go down the left, with a tricky lead in to ten foot rock smear. Surely the next rapid is a portage though, as it's even steeper. 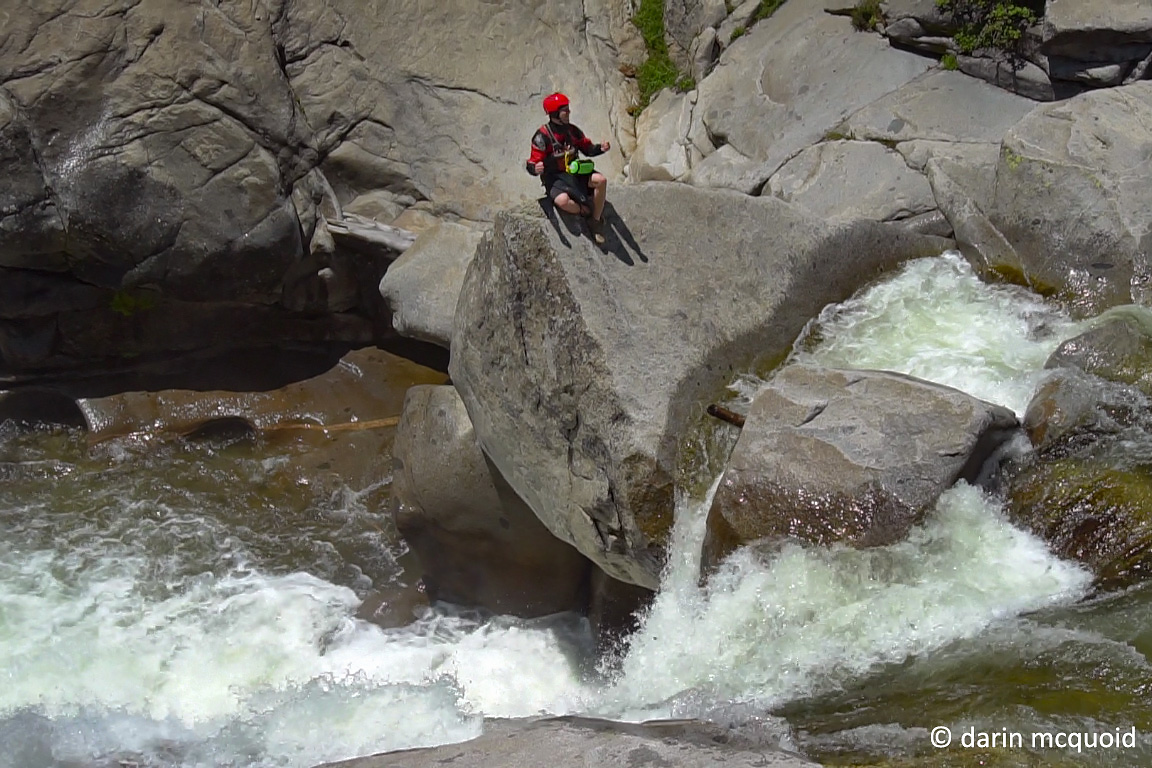 Ben Blake probes the rapid I thought would be a portage. 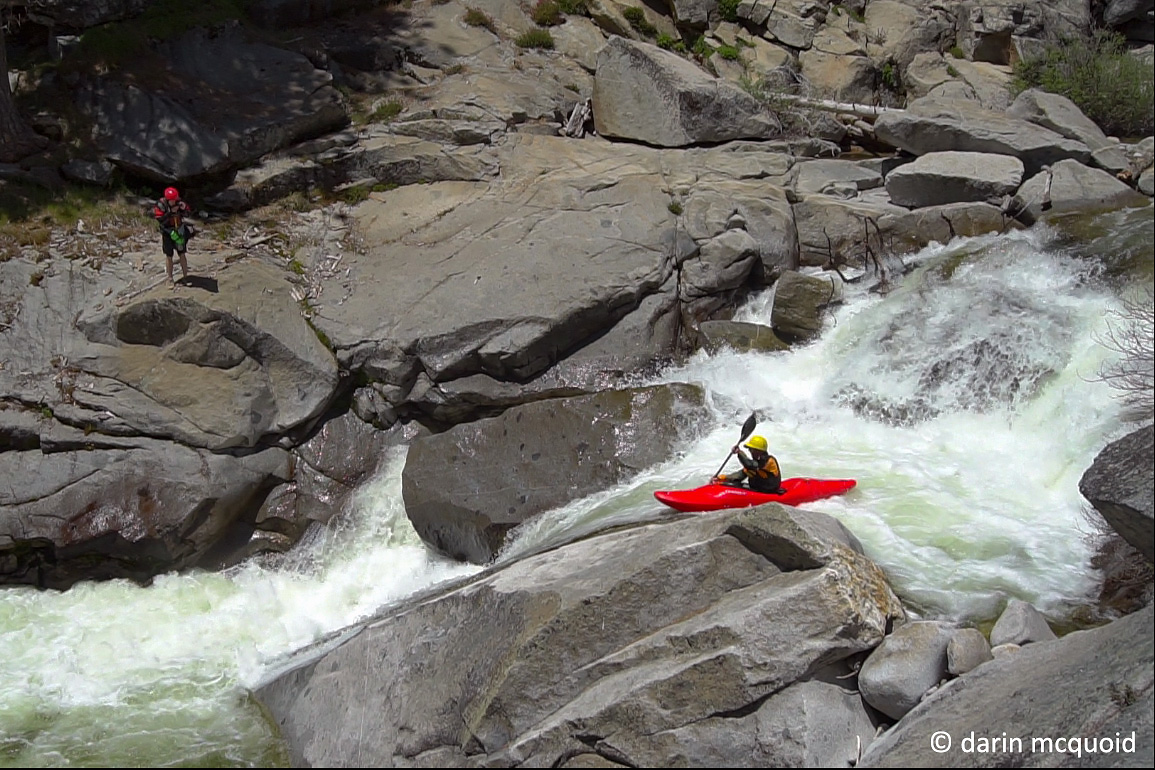 Surprisingly enough, the next rapid is a fine specimen too. Robbie Gilson lines it up. 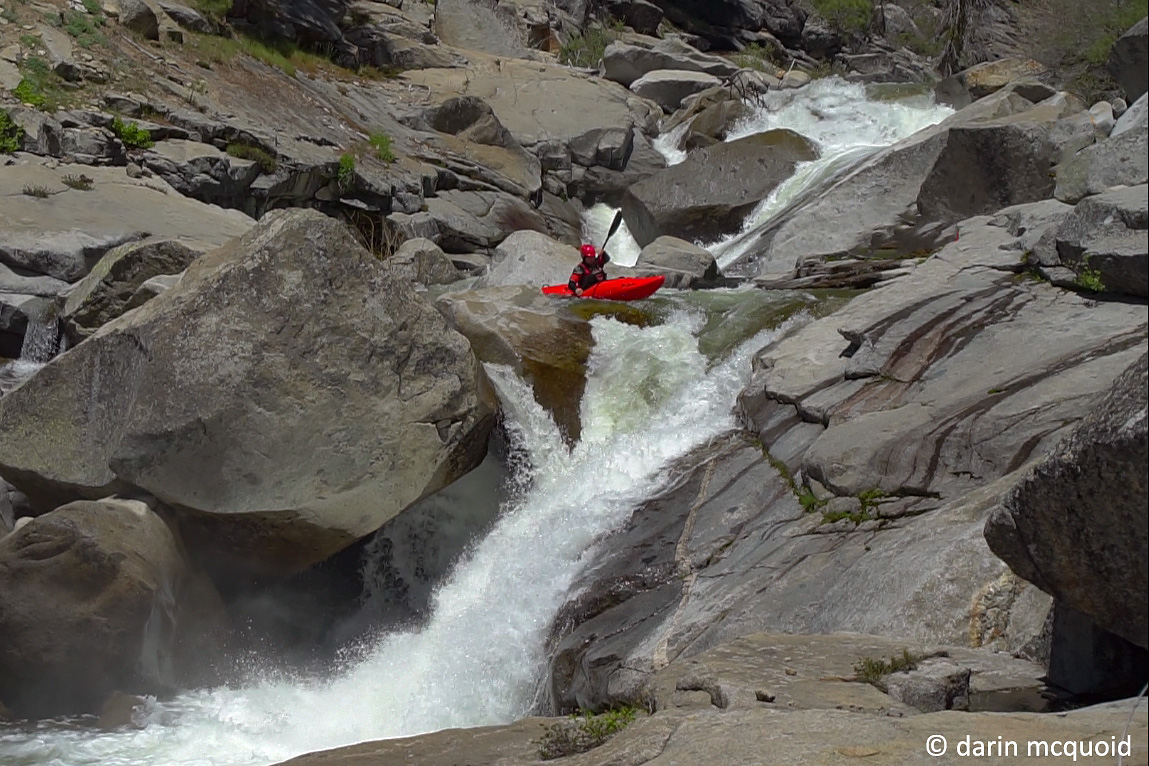 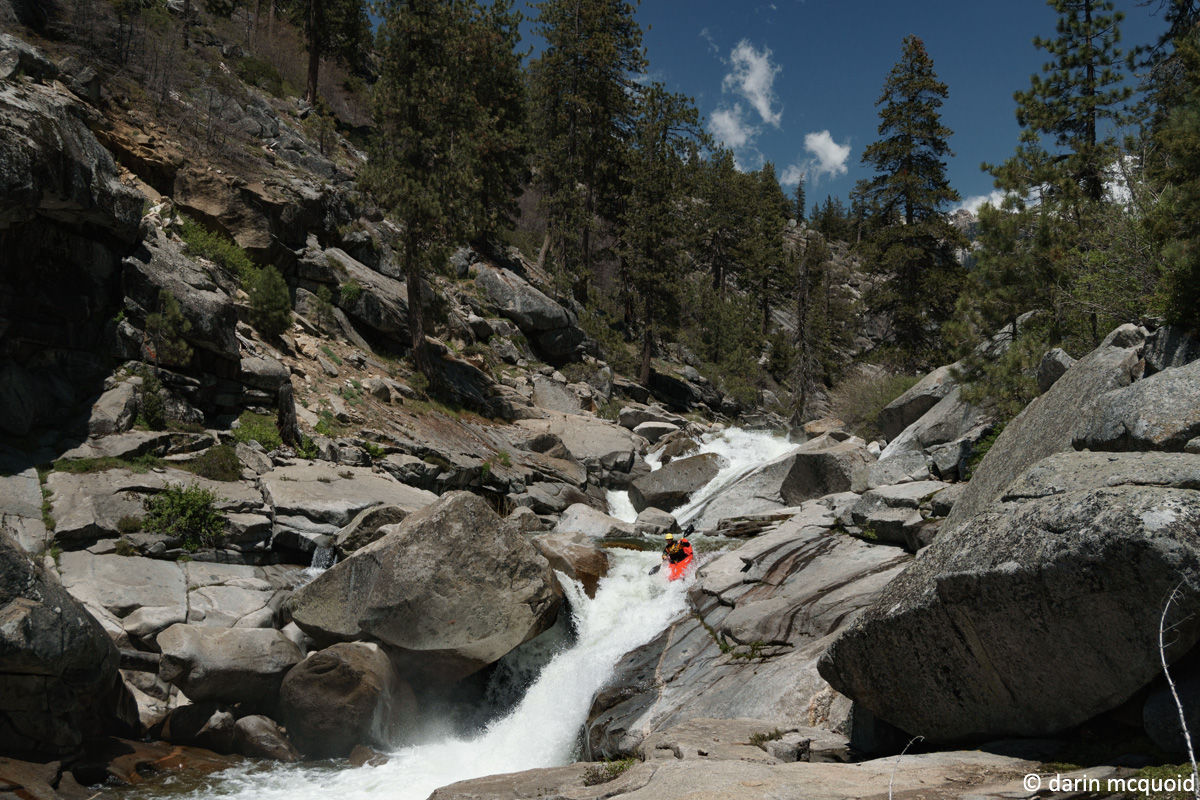 Now it's just before 2:00pm and we've moved about half a mile downstream. A bit slower than what we'd like, but not surprising considering the amount of video and scouting so far. The next horizon looms ahead and we're out for an extended scout. The results leave us questioning what to do. Wolverton Creek plunges down a beautiful cascade, and the Marble Fork goes through a long sequence, ending with a pocket hole that's impossible to set safety for. It's certainly possible to run this rapid, but we decide to side with caution and make downstream progress, portaging on the left.


Looking back upstream at our first portage. The pocket hole is hidden behind the rock in the center bottom of the frame. Higher up is what we just ran. 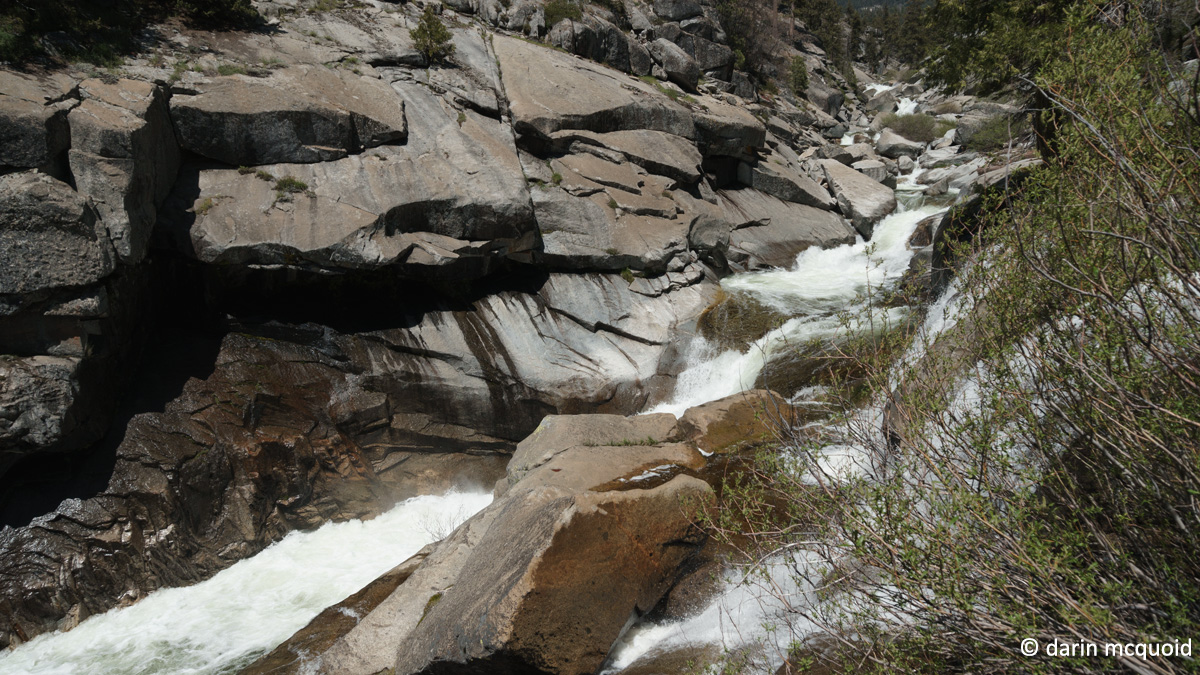 After the portage we take a break, eat a quick snack and have another extended scout, scrambing for seveal hundred yards downstream. We'll walk a bit further and put in. Somehow time has flown by, it's now 2:30 as Robbie Gilson lines up a nice boof in the next rapid. 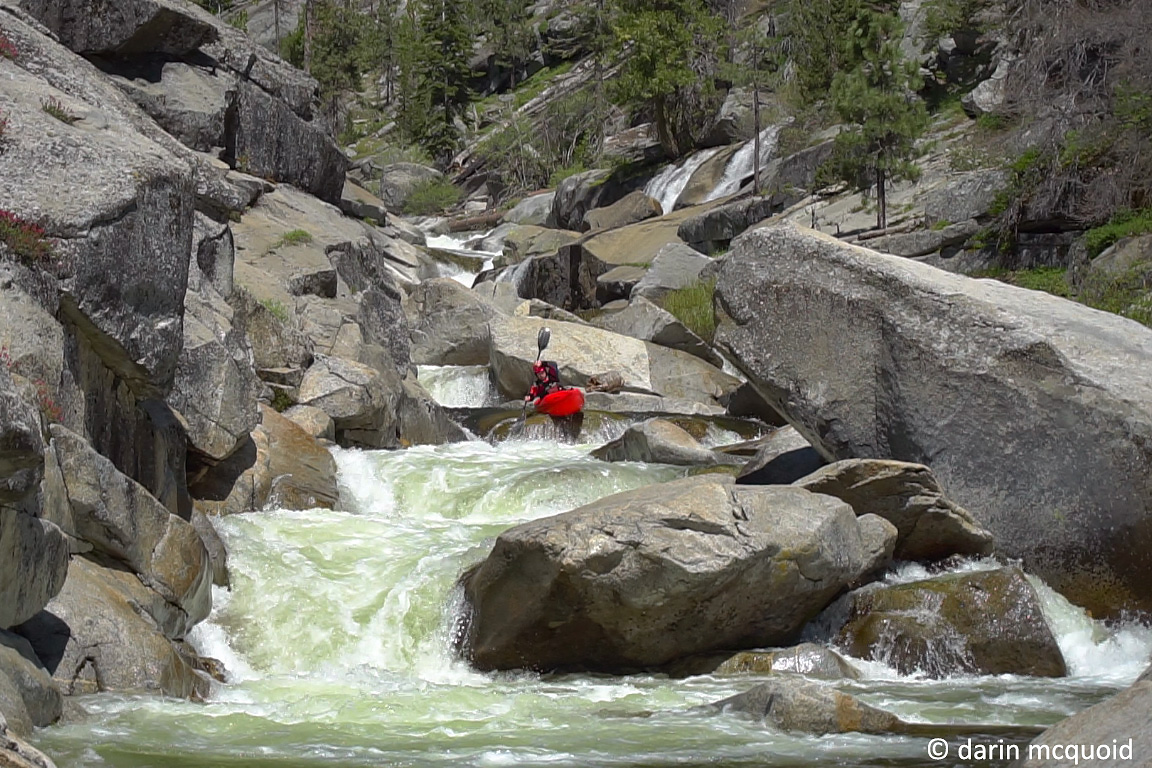 Next we split sides and scout, which can dramaticly change the way a rapid looks. We're out on the right and Robbie scouts left and gives it a thumbs up, Ben and I decide to portage right and set safety while he runs what looks terrible from our angle. 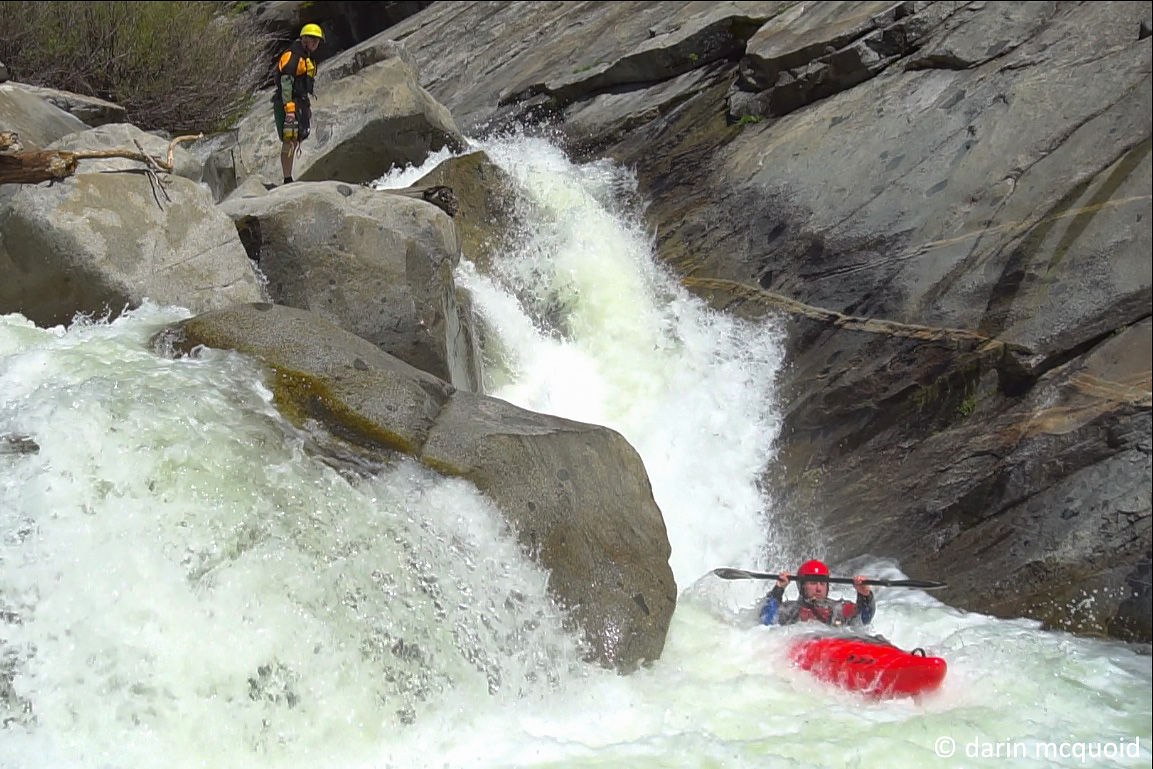 Downstream the river isn't quite as nice, we make a small portage and push downstream. A few downed logs create more portages, thankfully none too long. The character changes, it's boulder gardens, fairly open and not nearly as steep for a while, allowing us to make good progress. We hope we're past the gorge and the gradient will continue, as we're making great downstream progress. Then there is a horizon line. I have a sinking feeling in my stomach, as this has all been too good to be true. A quick look reveals yet another great drop, this one is a clean twenty foot waterfall. 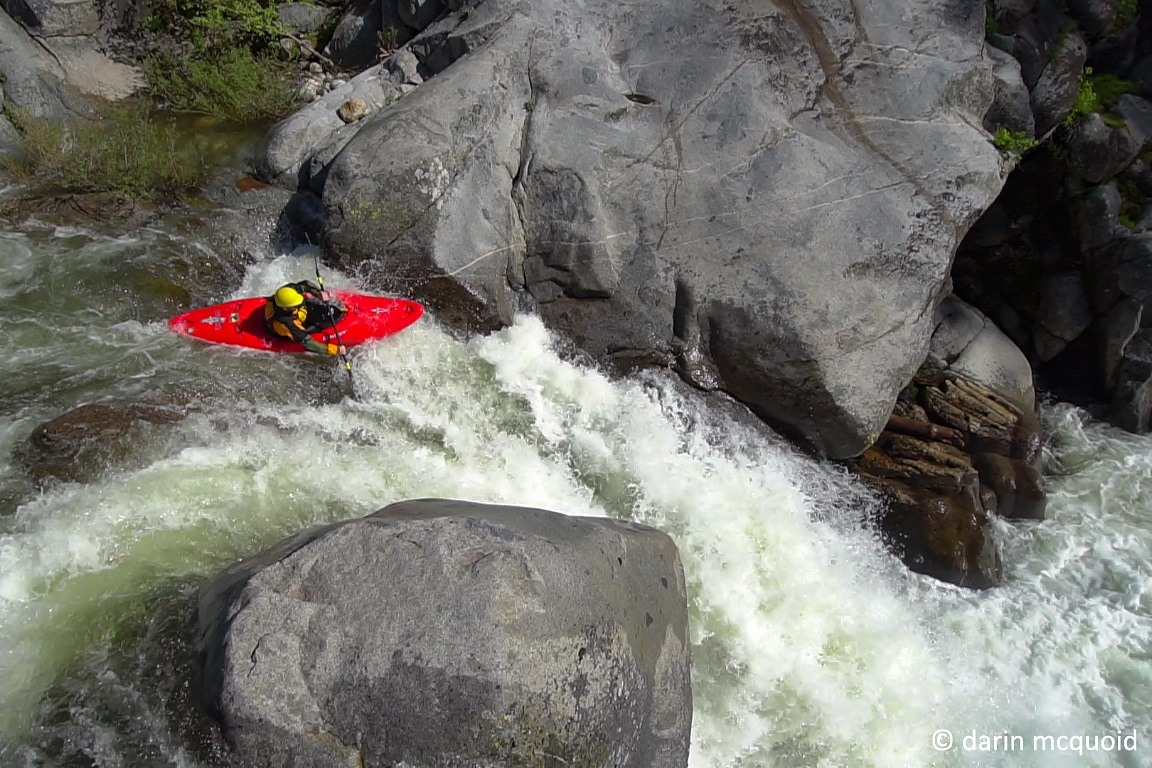 A slightly different angle on the same, this one was a relief because there is no easy way to portage it. Robbie Gilson.

Below the highlight waterfall we're out on the left to scout. We've made it about a mile downstream of the confluence, that is, about halfway through the run. We're standing at the lip of a nasty siphon, the river drops twenty to thirty feet through a pile of boulders. It's locked in a mini-gorge, and there is no way we can solve the puzzle at river level. For our first time of the day, it's up and around. This isn't good. Brush is incredibly thick, and it's steep, almost impassible but with some rope work and passing boats we can manage. Downstream progress is slow.


Ben Blake, not having as much fun now. 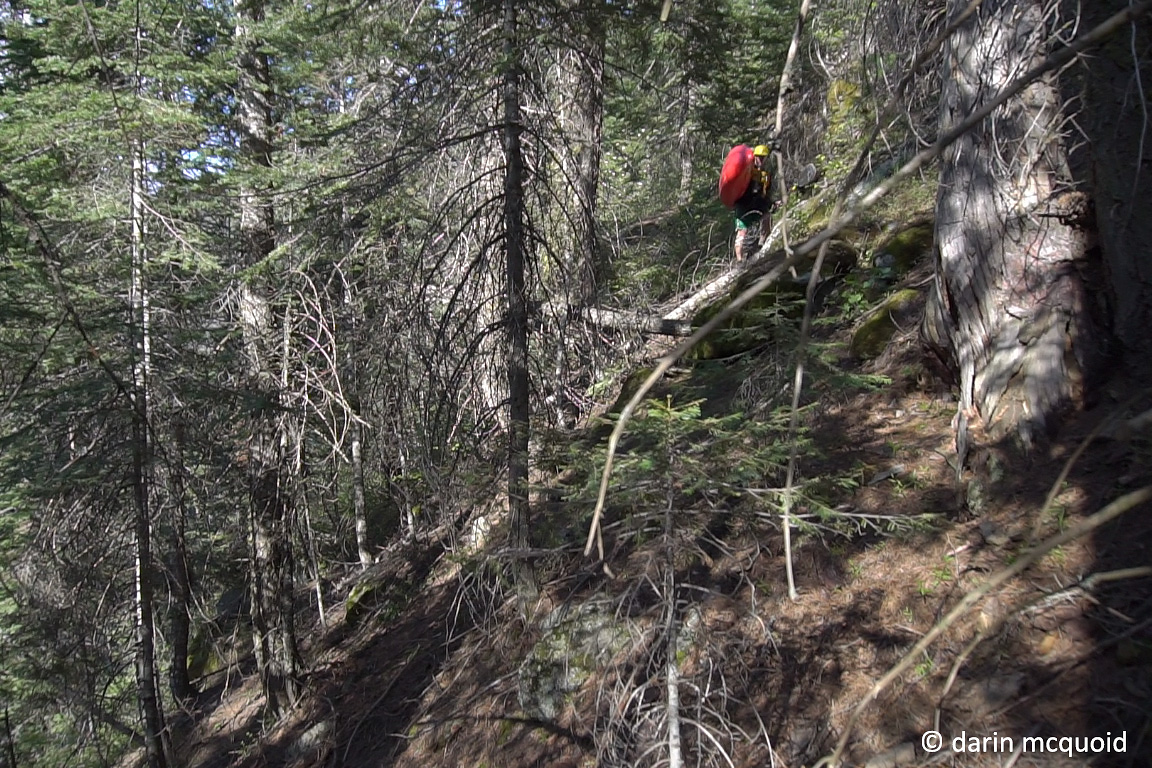 A brief opening allows us to take a peek downstream. More siphons in a gorge. 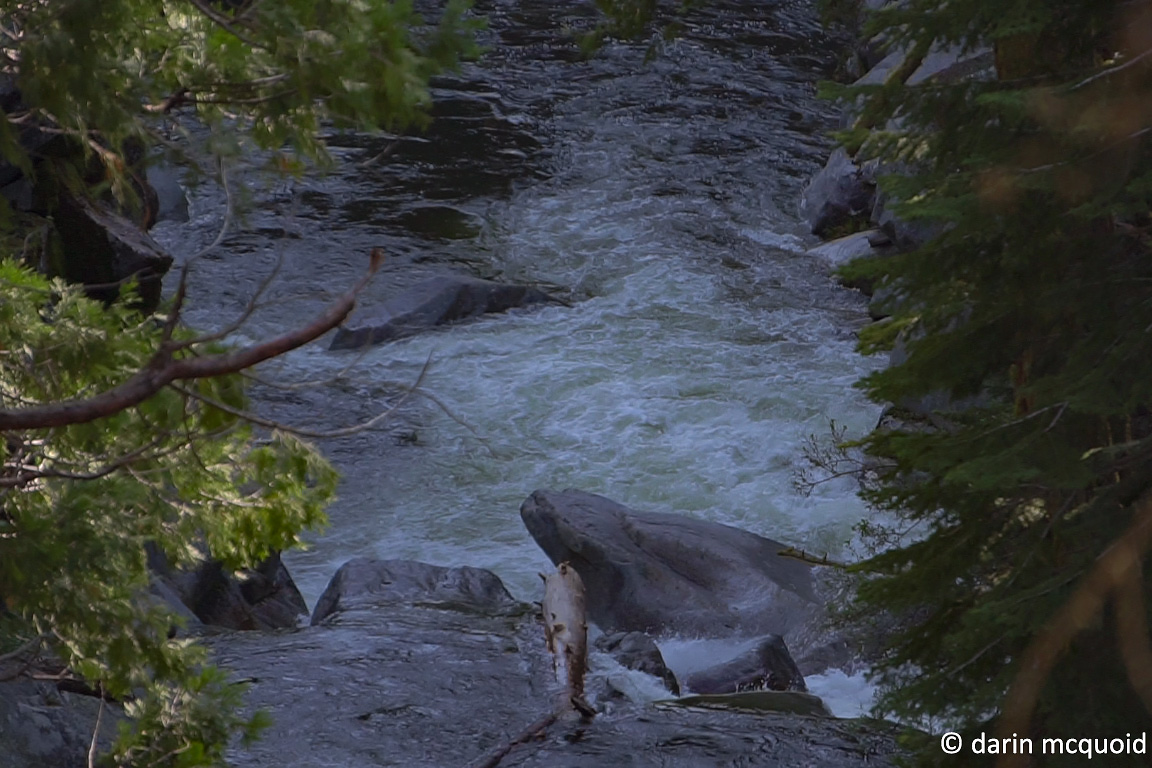 An hour and a half later, also known as 6:00pm, and we're at river level again. River level is not good. The Marble Fork is steep here, full of siphons and the logs are now floating downstream with the afternoon spike in flow. As it is such a short section, I didn't bother brining a GPS or map. No big deal, take out must be close at this point right? We've been on the water for six hours now, and it's only a three mile run. Walking downstream will be the fastest route out. We place our kayaks above the high water mark so we can make it out before dark, and start hiking. It's still incredibly slow going, brush obscuring every step and steep canyon walls, yet I'm still optimistic we can make it to the car before dark. Around 8:00pm we've only made it half of a mile downstream, to just past Sherman Creek. This is some treacherous terrain and we're all tired. Soon headlamps come out and we push on into the night. How can a three mile run be so long? We must continue on and maintain a positive attitude. I'm struggling and know the rest of the team must be worst off. Ben has metal in his ankle from an injury years ago on Fantasy Falls, and Robbie didn't sleep last night while dropping his brother at the airport. I really don't know how he can continue on. We're damn near stumbling and in full darkness the terrain leads us to the river, and in the faint headlamp light ahead we see the Crystal Cave Road Bridge. We've made it, at 10:00pm.

Of course our car is locked in, but a note on the windshield tells us the staff were kind enough to "dummy lock" the gate so we can get out. Great news. We pile in and motor up to the gate, which is indeed dummy locked, except for a chain that connects the two arms of the gate. There is no getting out for us, and this early in the year, there is also no ranger on duty patrolling. The DeLorme Inreach comes to the rescue as my better half picks us up near midnight, and we retreive the car in the morning.

Looking back, while Google Earth came up with 200fpm, old topographic maps indicate 373fpm, which is a whole different story. I didn't do my research well. Surprisingly enough, getting out kayaks was not too hard as we dropped in from the General's Highway (198) and only the last two hundred feet above the river was steep and brushy. If only we'd have gone up this way, we'd have been back at the road well before dark.

Come to find out years ago Sage Root and Jeff Trauba hiked out years ago, as did Chase Hauber and Logan Marlow. Maybe we should have a hike out reunion....

I won't bother giving beta to this run, as per Stanley and Holbek, if you are capable of the river you can figure out the shuttle.