It was a good thing I had heard nothing about this run prior to putting on. According to most available beta it's a terrible run. We had a flow of 1,200 on the standard gauge, and a three hour window to get Taylor Cavin back to work on time. When we met at Bridgeport I assumed it would be a standard 49 to Bridgeport run, but Justin Patt had many laps on Purdons under his belt and felt confident in our ability to route through the run. "Downstream of Purdon's Crossing to highway 49 is a gnarly class V+ run with many entrapment points and not all that much fun stuff." - CaCreeks.  From the put in I was surprised at how consistent and big the rapids were, perhaps because we were paddling through all the pools too. I was also grinning ear to ear as we bombed through multiple boulder gardens, linking classic boofs and lots of hole punching.  As you get down into the run, a large pool leads into this rapid on a bend and marks the beginning of a steeper section filled with large rapids. Good large rapids, more great linked moves. 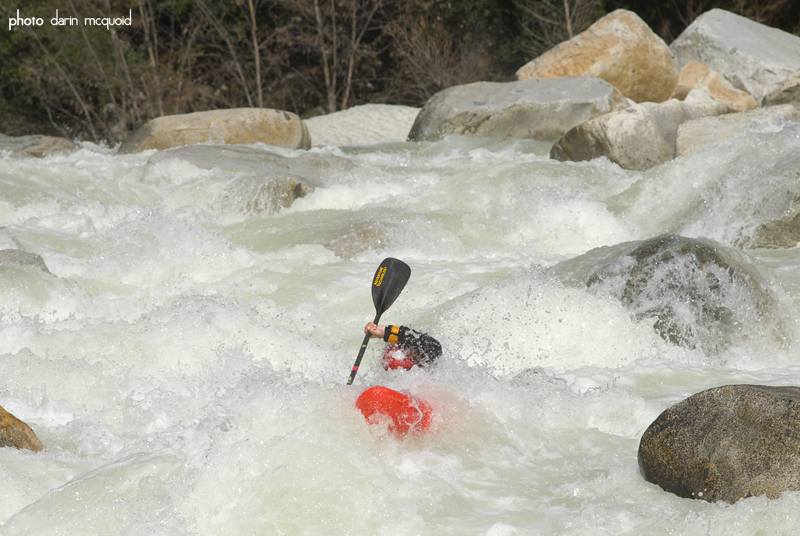 Looking back up at the same rapid, which has a sneak route via a river left channel. 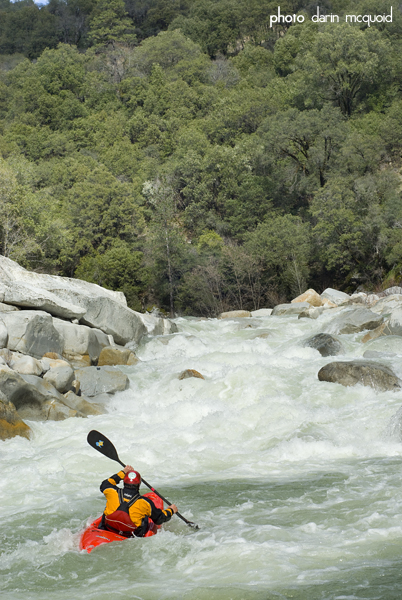 The first day all the rapids blurred together, but on the whole the river is filled with big fun boulder gardens, until the remains of an old dam that yields a good boof on the left, or if you are feeling bold, a stout line in the main channel. 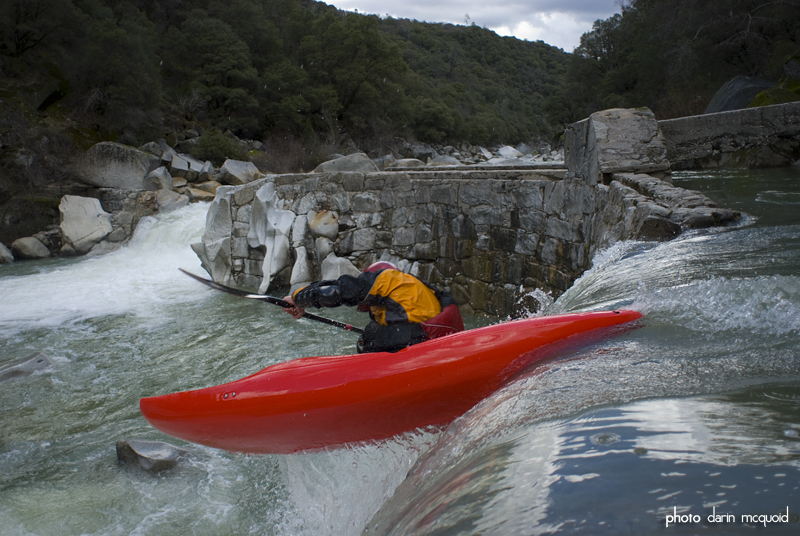 Will Pruett boofs the same. 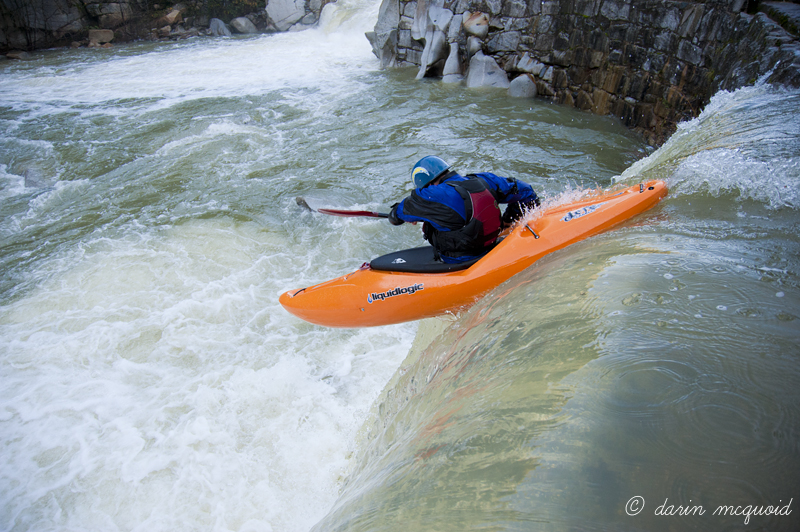 Looking downstream from the dam...this is what the run is all about, steep granite boulder gardens. 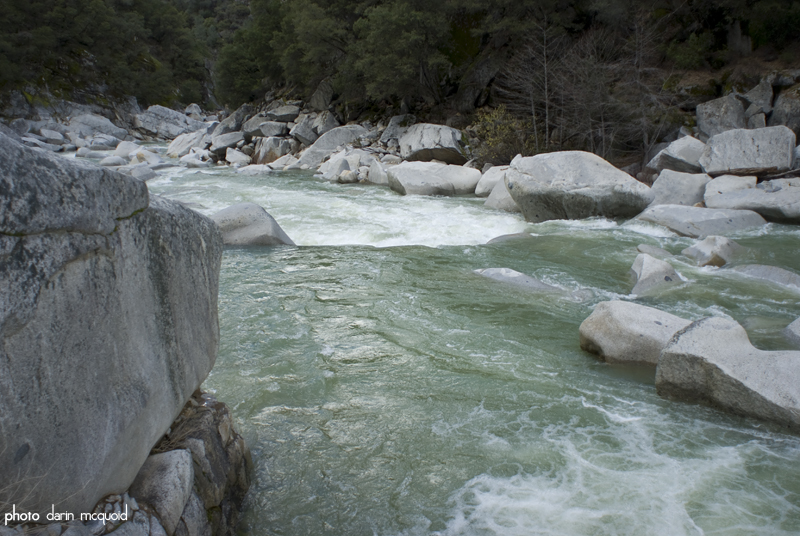 About two thirds of the way through the run is a rapid to take note of. Some years it's a portage, yet other times it will fill in, opening up a boof down the center. Granted this boof is right over the sieve, so like the rest of the run, stay in your boat at all costs.

Scott Ligare squeezing over at 900, a minimum flow for both the run and getting through this narrow notch. It cleans up into a nice boof at 1,200. 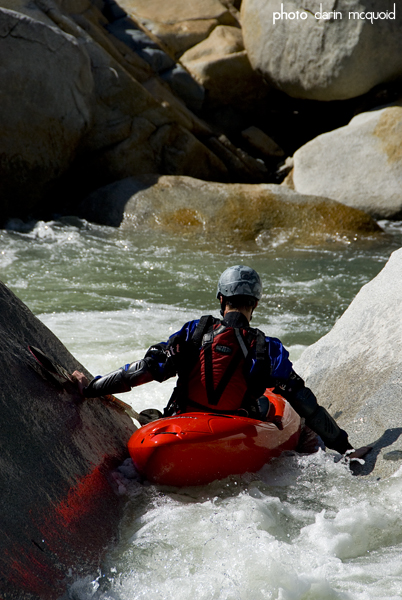 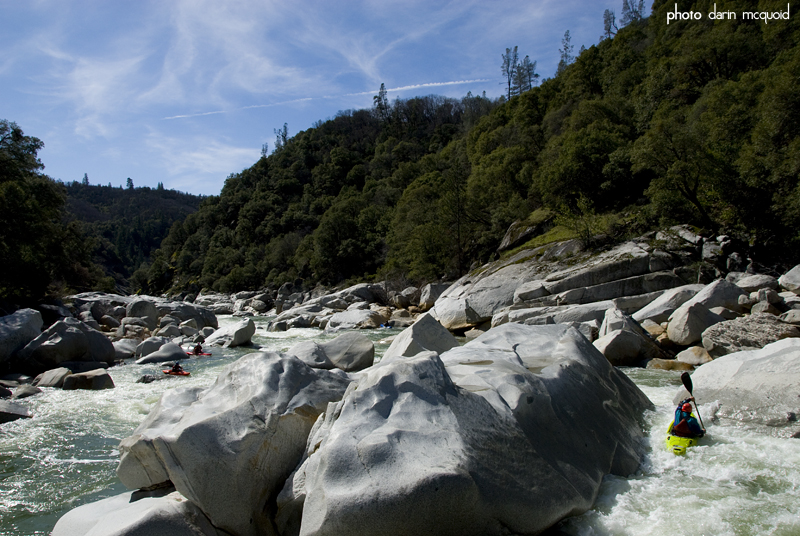 Will Pruett runs the same rapid at 1,500cfs. 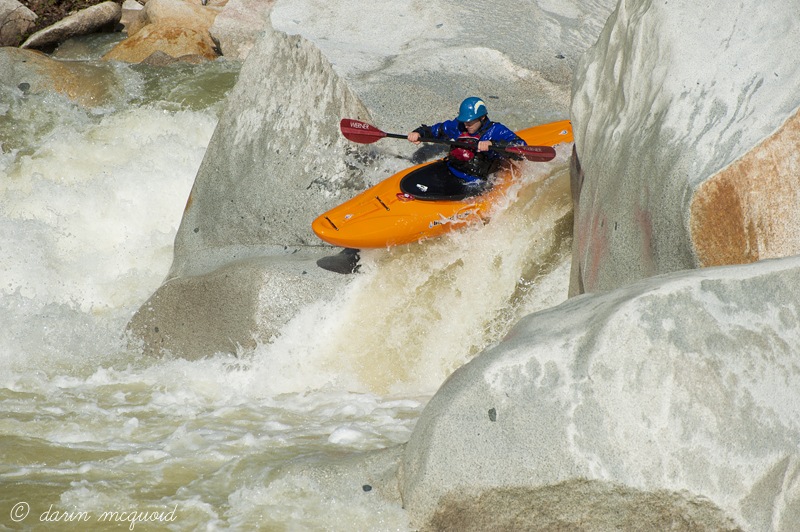 On our first trip down we did manage to make it through both runs in an exhausting three hours. Corner Pocket was still the most stressful drop of both runs. I've done the runs at flows from 900-2,400 and thought 900 was perfect if you were going in for your first time, and I wouldn't go in too much higher than 1,600 again, although oldschoolers ran it at 3,000 in long boats.   At high flows it deserves a V+ rating, while personally I'd rate it class V, on par with Golden Gate at medium high flows, but with more sieves. It has also been run much lower, but I wouldn't touch it with less than 900.    The character of the run dictates that swimming is to be avoided at all costs, there are a lot of underwater sieves, but provided you stay in your boat this run is very, very fun, it delivers a lot of goods in a half day run, and makes for a nice quick one day when linked with 49 to Bridgeport. I consider the run a classic and go back to it time and time again. Take out at Bridgeport or Highway 49, either are easy to find. Put in at Purdons Crossing, easy to find with this Google Maps marker.