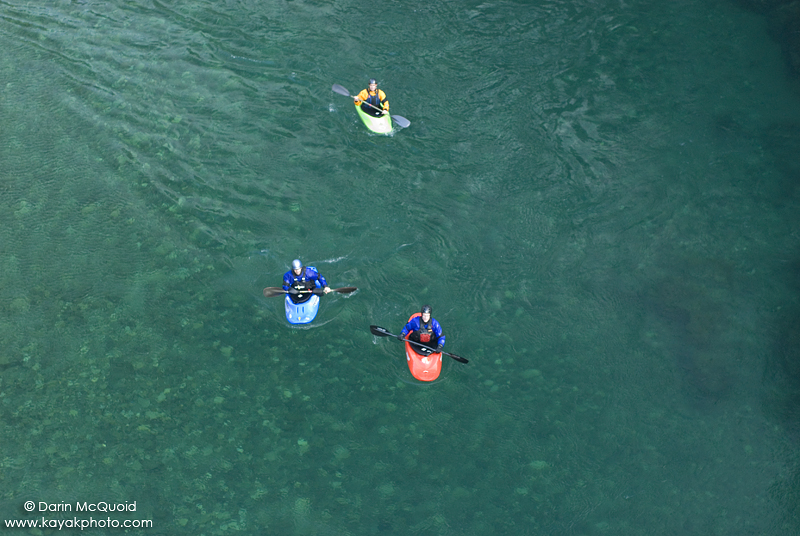 Sunday we had a mixed group of paddlers and decided to paddle first the Oregon Hole gorge, and then the South Fork Gorge. Both these runs use the same take out. Oregon Hole went well, and we milled around eating lunch and getting cold, followed by a quick shuttle for the SF Gorge. Things have changed since Best Whitewater of California was published. The stated weigh station is gone, and there is now a river access signed “Craig’s Beach” that is the take out for the class II/III South Fork run, and put in for the gorge.
While gearing up at Craig’s Beach we ran into a group of paddlers from the bay area taking off the II/III run. One mentioned the run being “scenic” and we invited him to join in a gorge run with us. Generally we always refer to a run as “scenic” and don’t say anything else about it when it’s not that great. The McCloud…good scenery….you get the idea. With our group up to five we put on the water and quickly discussed hand signals. The first rapid of the gorge is a nice class III rapid with a hole that gets more retentive as flows drop.


Nate runs the entry move to #1 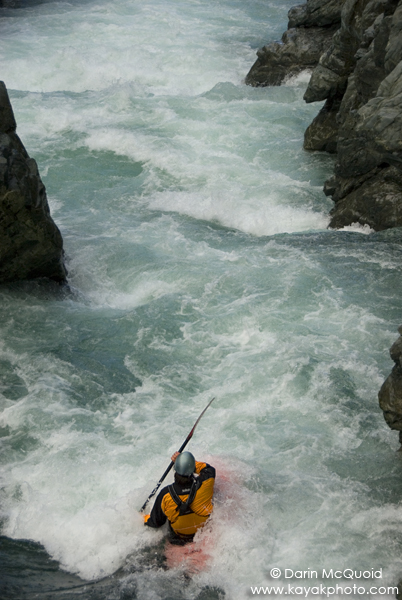 Samantha puts the heat on for punching the hole. 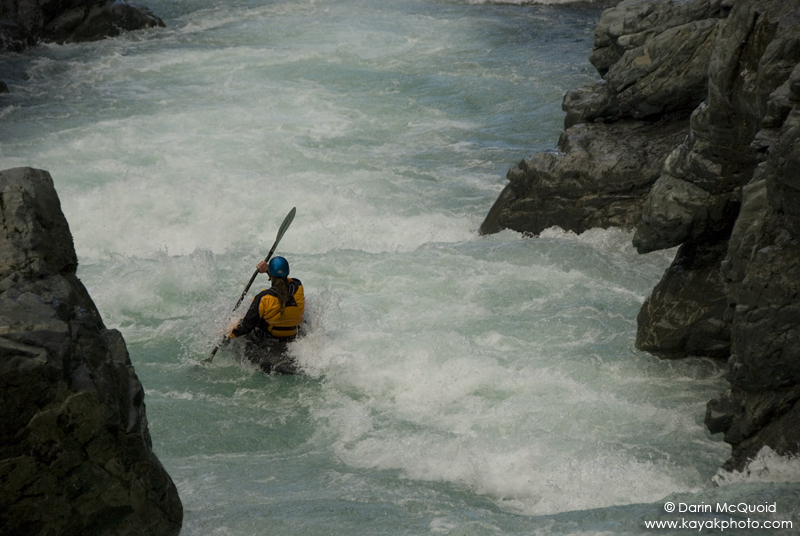 Below the first drop there are eddies on both sides, and if you eddy on the left it’s safer to eddy out a bit higher up, if you push to the edge of the rapid you take out with your stern in the water going down the rapid while clinging to rocks trying to get out. Dave and I figured that one out. A quick scout showed a large, quite ugly hole on river right and twisty drop on river left. I felt good about it and charged down the center moving left and got into the water moving around the hole quite easily, punched the next hole and found a huge eddy on river right. Davey hopped in his boat next and paddled through with a nice clean line. 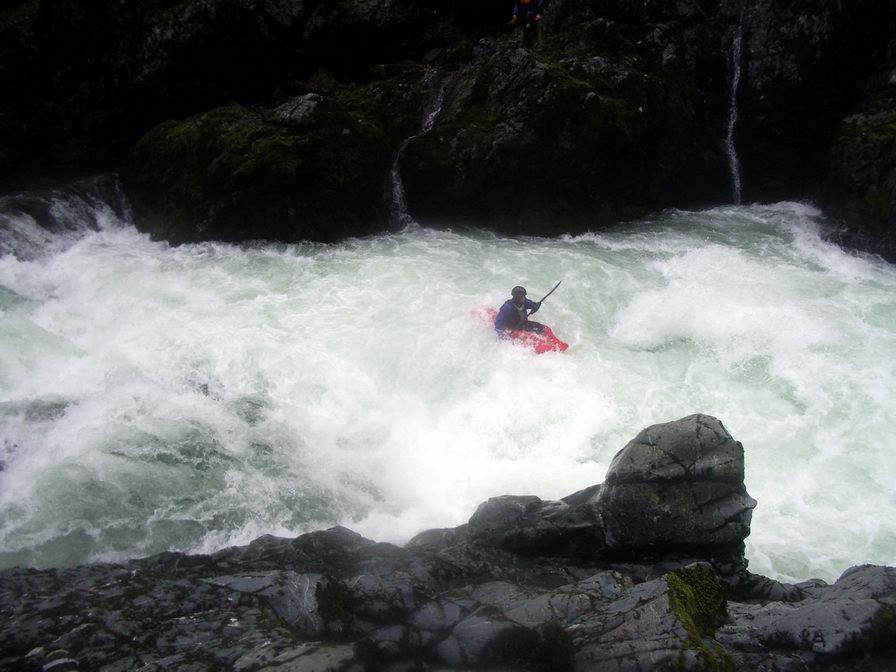 Brian headed to his boat next and I shot this video of him hitting the same line.


Konrad was up next, and while paddling up the eddy lost his placement and dropped down the center, mistaking a rock to the right of the boof as the boof rock. This resulted in a slight piton. The piton killed his speed and Konrad spun around, barely missing the large hole as he drifted by it sideways. BJ was up next and was probably the least experienced paddler in the group but ran the rapid quite well, brushing the hole but with lots of momentum in this shot. 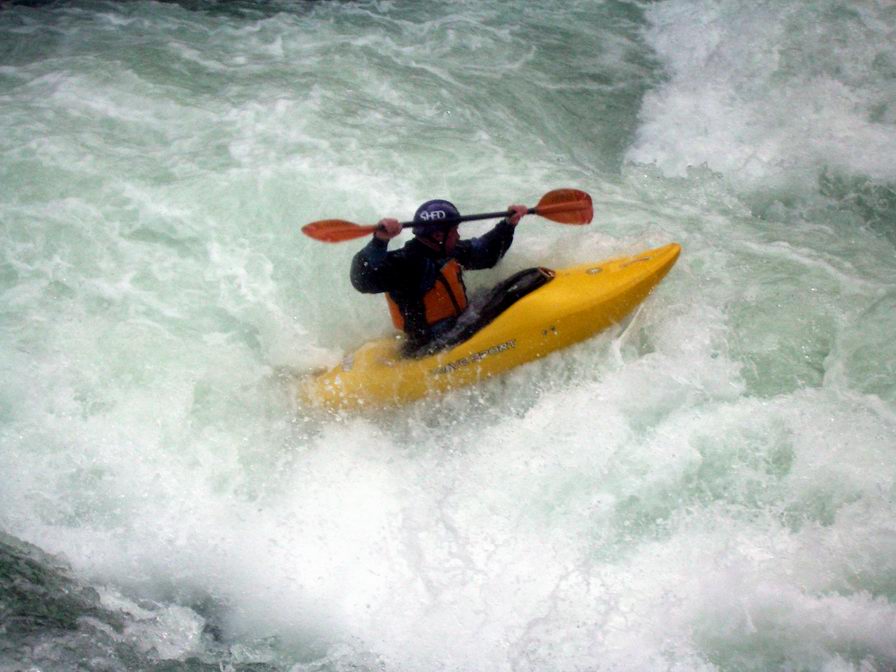 Next up was a nice rapid that Dave scouted on the right and BJ on the left, and I probed down the middle through some nice splashy water, and eddied out to wait for the group. Clean lines for all through the rapid.
One more class III rapid and we were eddied out above the next drop, one you couldn’t see all the way down. I saw a nice rock boof into an eddy on the right, and went down to the eddy to check things out. The right side looked good and BJ went to follow me down into the eddy but didn’t move back upstream enough to get all the way over. He ended up sliding over a two-foot ledge sideways and started to get surfed. He worked his way to the right side of the ledge hole and flipped, flushing out on the eddy line. BJ tried several rolls but wasn’t able to get any in the swirly eddy line, and swam. Thankfully he appeared in the eddy, but the boat took off downstream. I started chasing it until what looked like a rather large drop immediately after the rapid he swam in. I watched the boat plunge down it and go through a nice hole and decided to follow it on through. This was really a rather fun rapid had I been paying attention to it, and was really the last rapid in the gorge.
The final drop requires a center to right move and is a lot of fun, pictures don't do the slide justice, and occasionally paddlers end up on the left wall that is perfectly shaped for holding a boat and paddler until they swim. 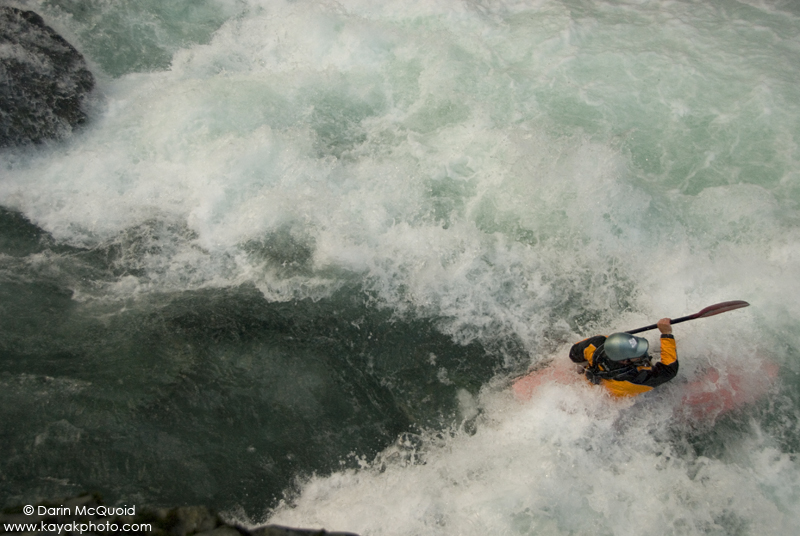 This is what happens if you get pushed left onto the wall. 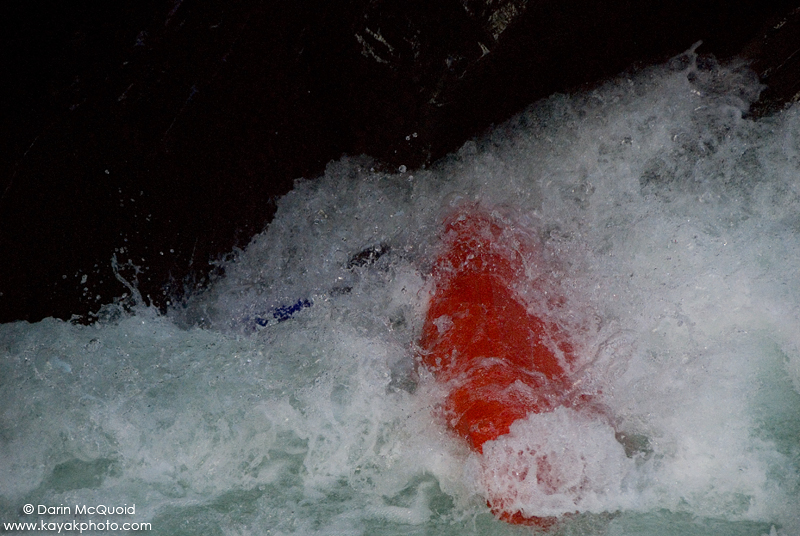 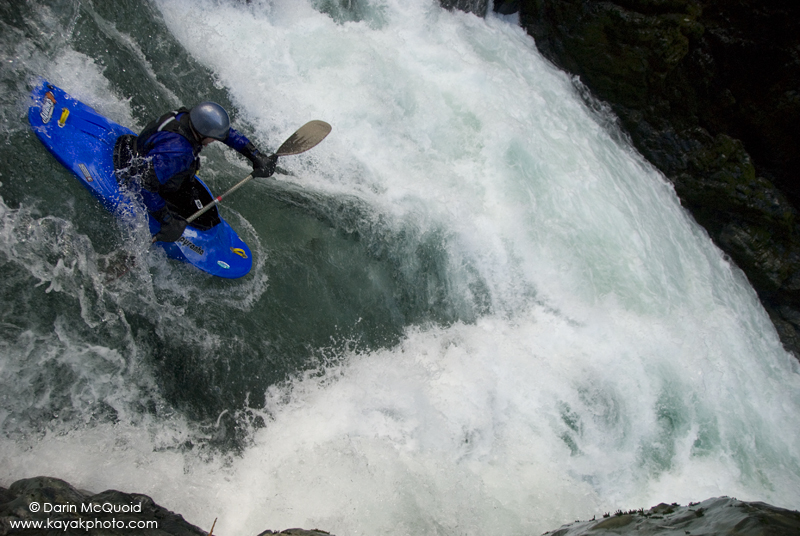 I drug the boat over to the side and we regrouped for the paddle out through a bit of flatwater and beautiful gorge scenery. 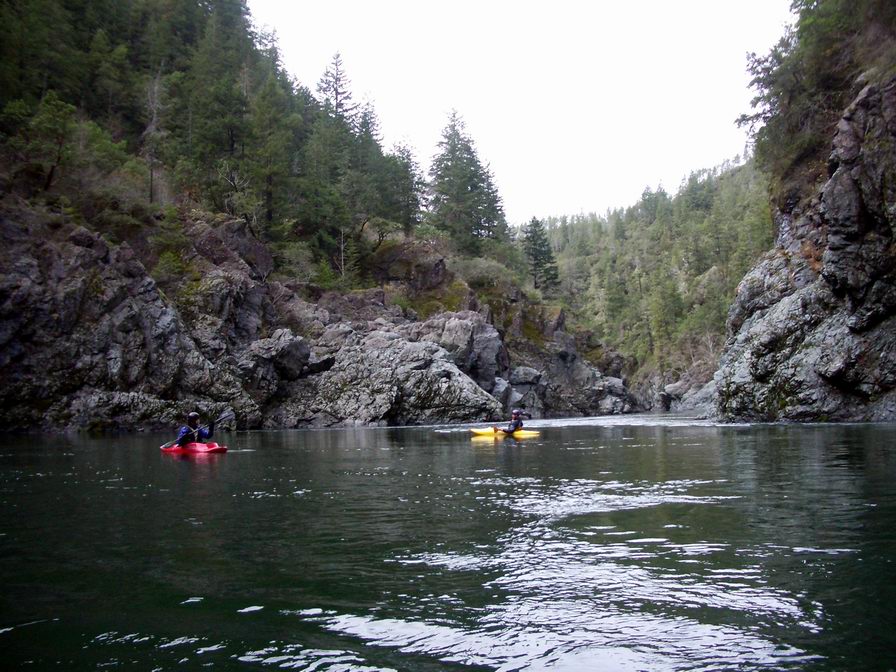 Nate with the killer shuttle rig, nine people plus boats for a quick shuttle on the South Fork Smith. 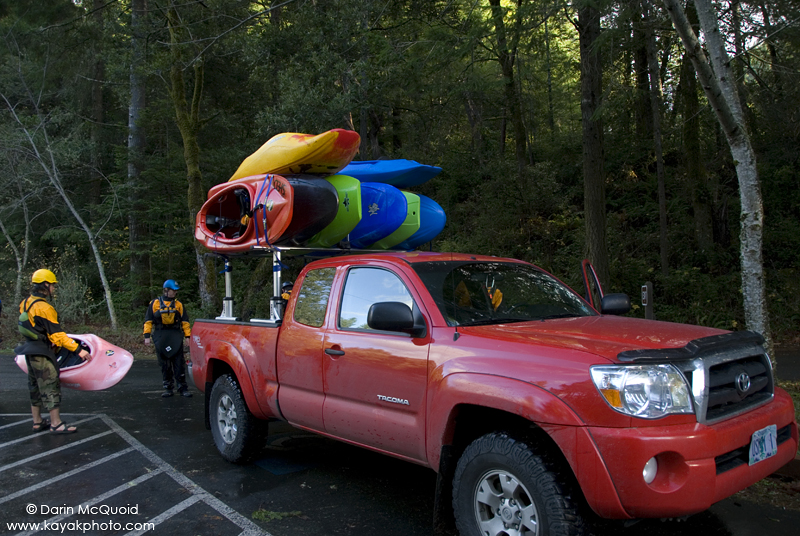 At most flows the South Fork Gorge is decidedly a step up from the Oregon Hole Gorge, as several rapids have more consequence. Combined they make a fun, although still short day. You can do two or more laps on each in one day, or four to five on each if you are motivated.

South Fork Smith on estimate on dreamflows. My memory is hazy, but I believe I've paddled it as low as 500 and as high as 2,000 but take that with a grain of salt.