It's hard to give a lens a fair review with no comparison. In light of that my future reviews will pair the lens being reviewed aginst my current favorite option in that focal length. In this case that's the old Nikon 28mm f/2.8 AiS that has a fantastic, even legendary reputation for being sharp up close but worse at distance. In my personal use I found it incredible at distance too.

The Nikon Nikkor 28mm f/2.8 Ai-S was first on the market in 1981 and has eight elements in eight groups. In 2015 Sony introduced their new, 9 element in eight group non-Zeiss badged FE 28mm f/2. It is only 7.2oz (without caps). It retails for $450 new. Surely this modern design must beat the old Nikkor?

Reviews are of very different opinion about the new Sony FE 28mm f/2. Most reviewers don't own a lens long enough to get a true feel for it. One or several days just isn't enough time to get a true feel for a lens. Sharpness sure, but not an appreciation of charcter. After a month of use I can see why reviews are all over the place about the Sony. It's simply a strange lens, at times stunning and at other times quite unimpressive. Perhaps it's a quality control issue with my copy. Overall I've found the lens to be incredible on scenes around three to five feet. For a fast wide angle lens the bokeh is superb, and it has unusualy shallow depth of field, even when stopped down. I'd guess this is in relation to the field curvature of the lens, which is not easy to understand; it's quite strange. Distortion and vignetting are as bad as everyone else says. It's the only lens I use distortion control software on nearly every shot. Even at f/2 the Sony FE 28mm f/2 is sharp in a very small central portion, but that sharpness quickly drops off.

As far as size the two are quite similar once the Nikon is mounted on an adapter, but then the Nikon is another 3.5oz heavier, putting it at 12.5oz, considerably heavier than the Sony.

Please bear with me as these tests are tough to do, at the moment I don't own the Nikon 28mm f/2.8 Ai-S. When I shot the Nikon the grass was green, today it's brown. Visibility is well over twenty miles. Shot on a tripod, shutter speeds fast enough to eliminate any kind of shake. Manually focused on the barn just off center. Lenses focused at maximum aperture and left there, no adjustments made for focus shift or field curvature. Whitebalance set to daylight. The green grass helps contrast look much better, it's best to ignore that and look at landscape sharpness. 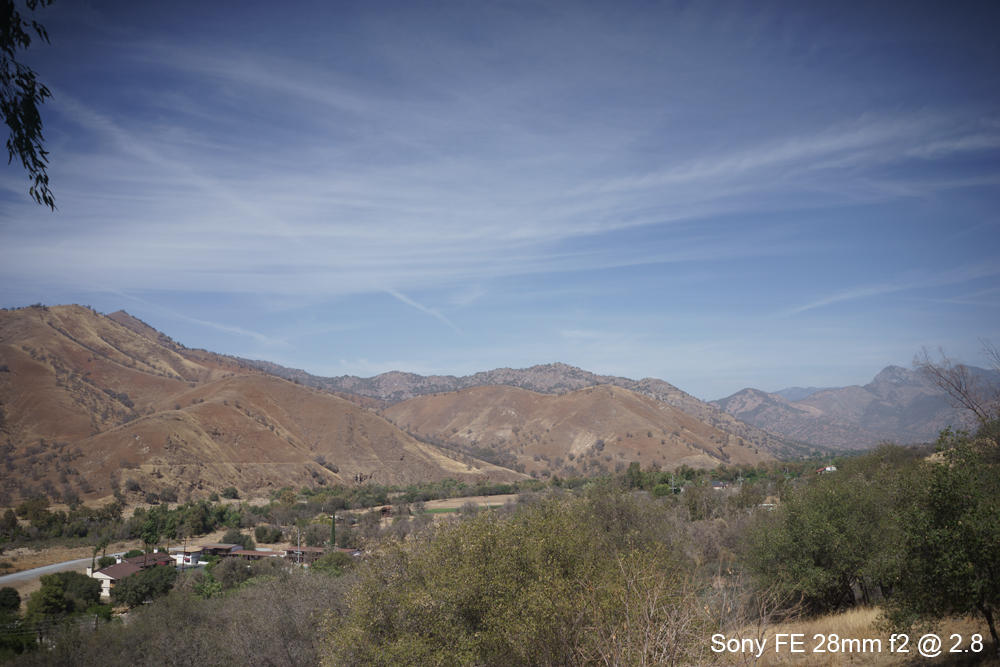 Yes, the Sony FE 28mm f/2 is that much wider. Uncorrected for distortion it's probably a 26mm lens, but correcting for said distortion will eat that 2mm up. Sony planed on using software distortion with this petite lens, as well as vignetting correction. Typically I ignore some distortion, but the Sony doesn't have some distortion, it has a lot. In real world use I'd correct it, so the corners would be stretched and look even worse than they do in the uncorrected crops used in the test. 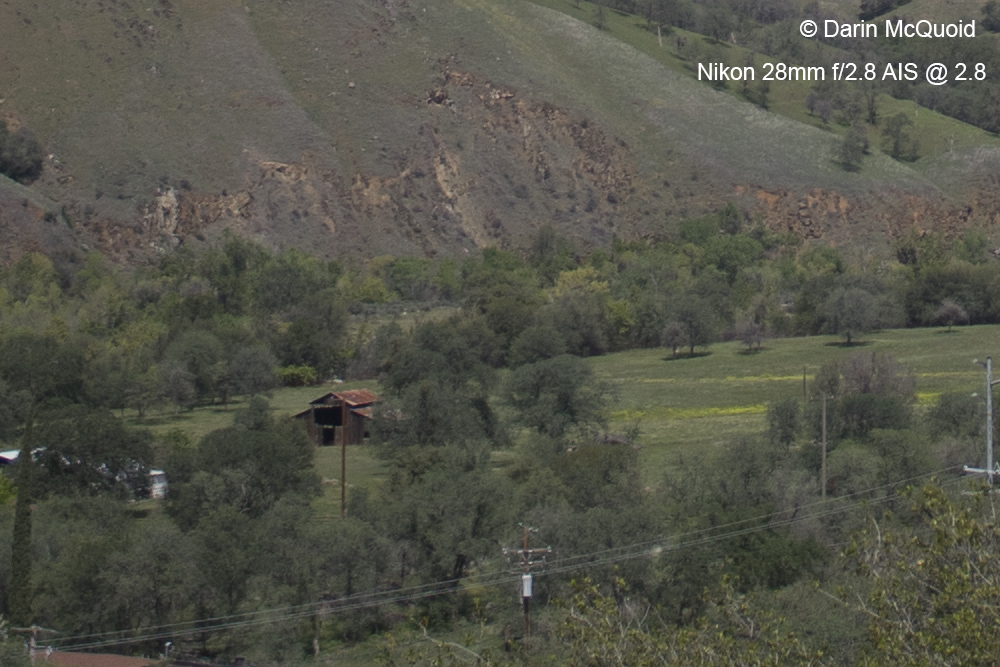 Thirty-four years. That's how much older the Nikon 28mm f/2.8 Ai-S is. Remarkably similar in the center although I'd give the venerable Nikon the nod. The sharpness of the Sony extends more gracefully to the extreme corner, but the Nikon sharpens considerably faster as it moves away from the very extreme corner, just look at the porch railing. 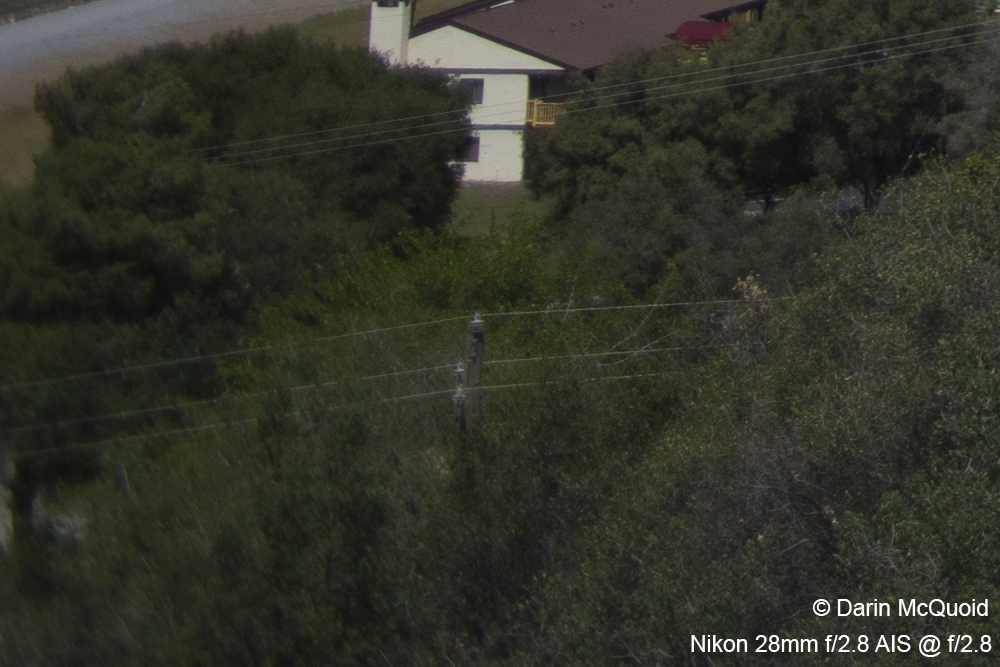 Vignetting is so similar at f/4 we'll skip the overall view and move on to the crops.

The light and especially the dry grass and trees make things so different that it's tough to judge, but I don't see a significant sharpness difference here 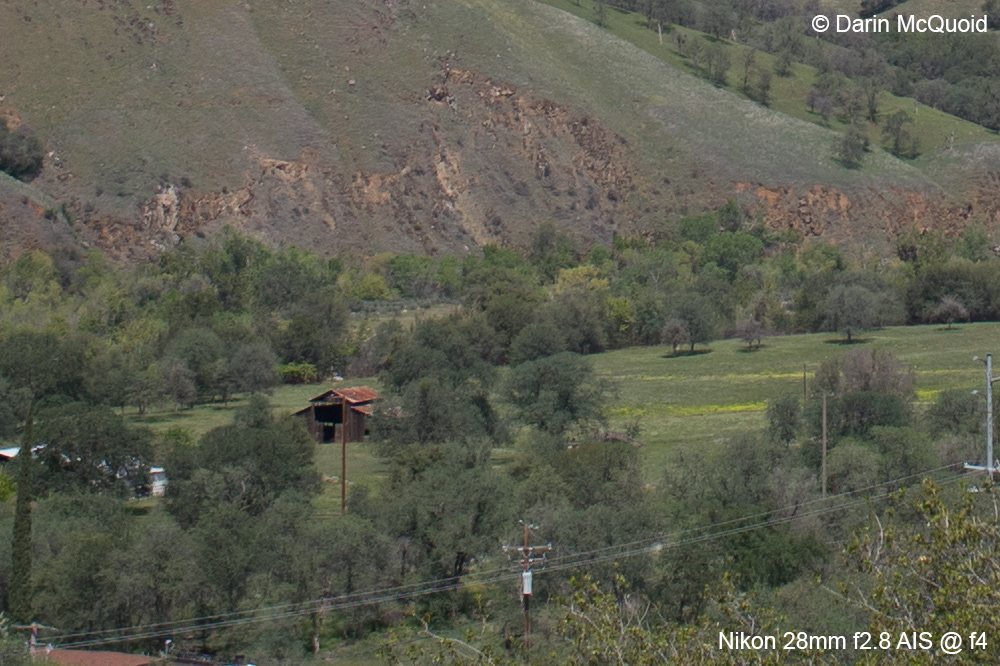 Very different, on the Nikon look at the sharp porch railing and purple CA on the edge of the building, and the sharpness falls off past the power line. The Sony is less sharp overall, but doesn't have CA and the lesser sharpness extends to the very corner. 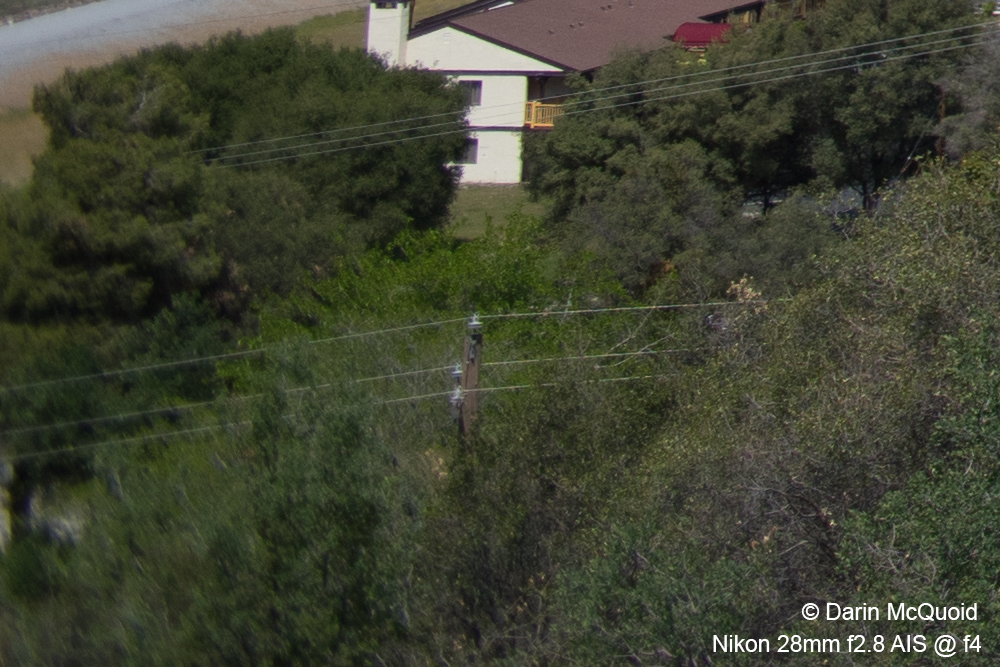 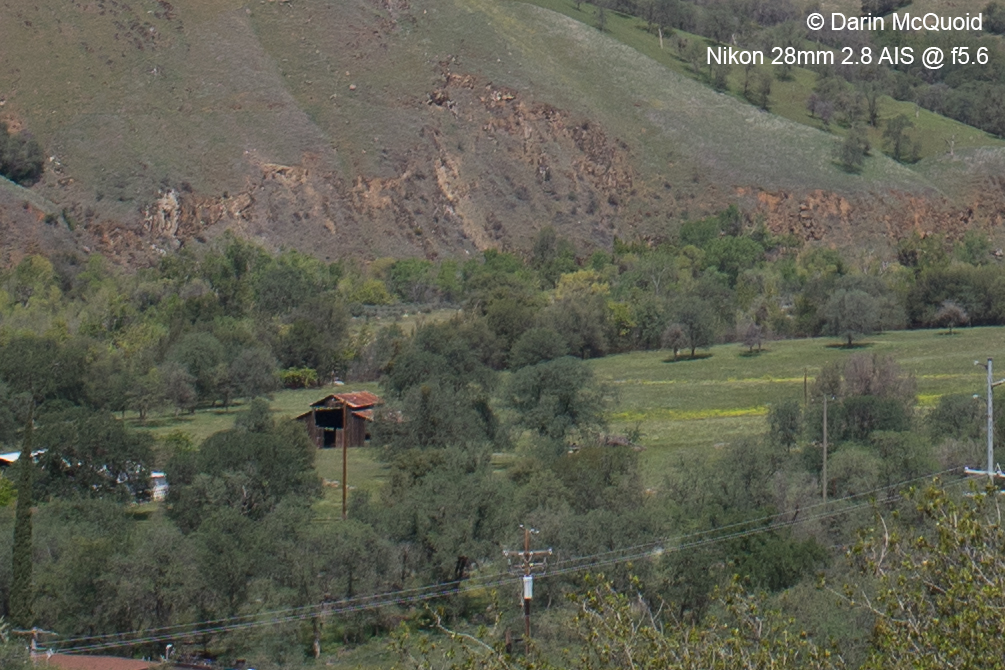 Similar to f/4 but the Nikon continues to improve into the corner. Except for those last 50 pixels it's killing the newer lens. 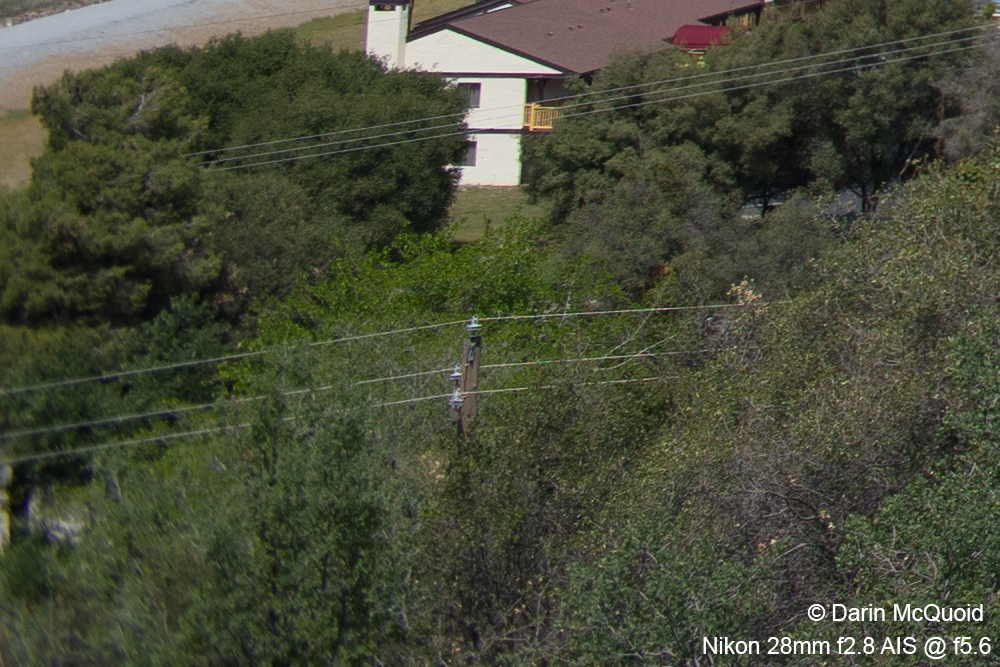 No vignetting at 1/800 f/8 for either lenses so we skip to just off center crops. 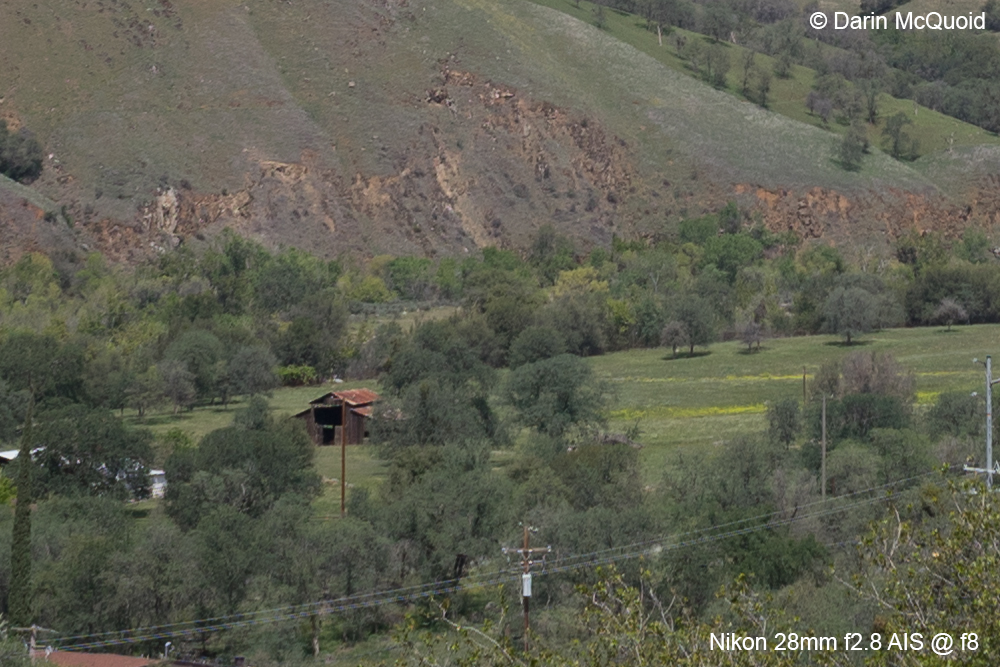 At f/8 the Nikon really starts to sing while the Sony looks similar, nice but still not crisp. 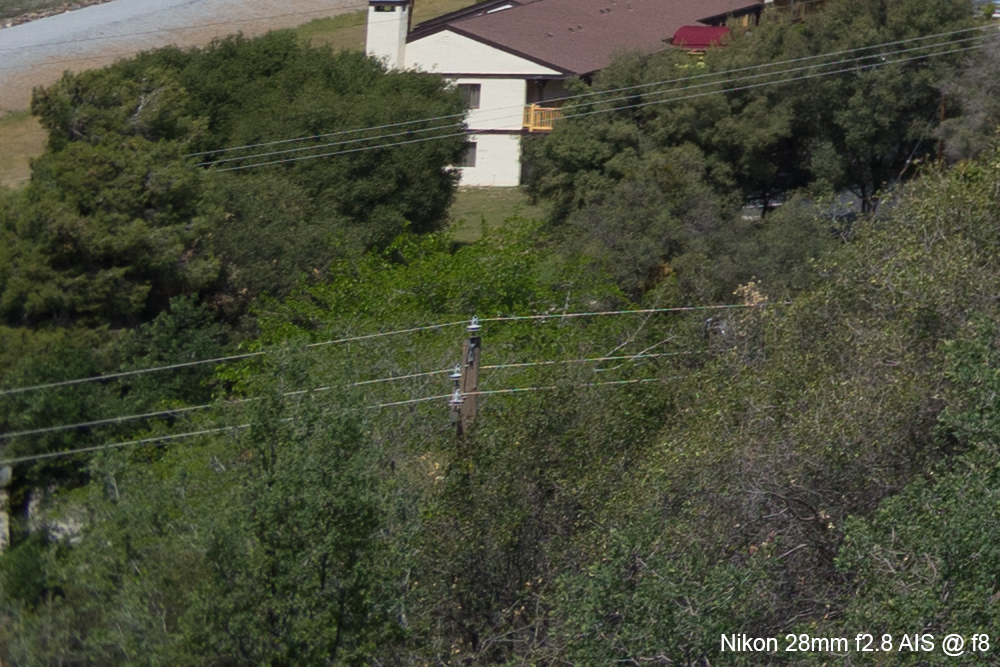 Diffraction takes a toll at f/11 and they all look the same in the center, and quite similar in the corner. 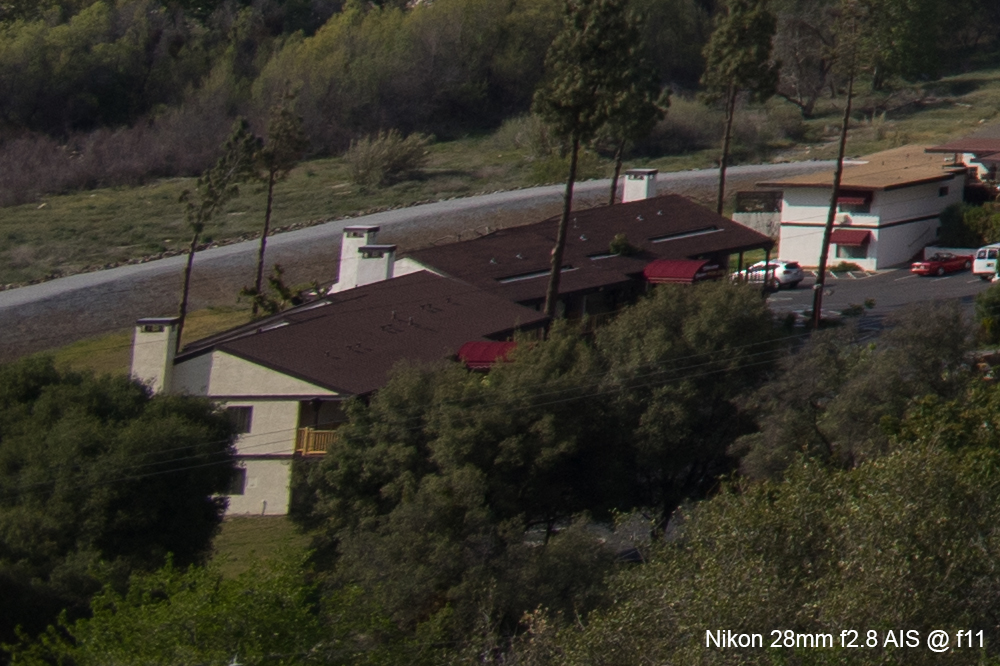 It's almost more interesting to see how the Sony FE 28mm f/2 changes from f/2.8 to f/11 in the corner - really not an incredible amount. 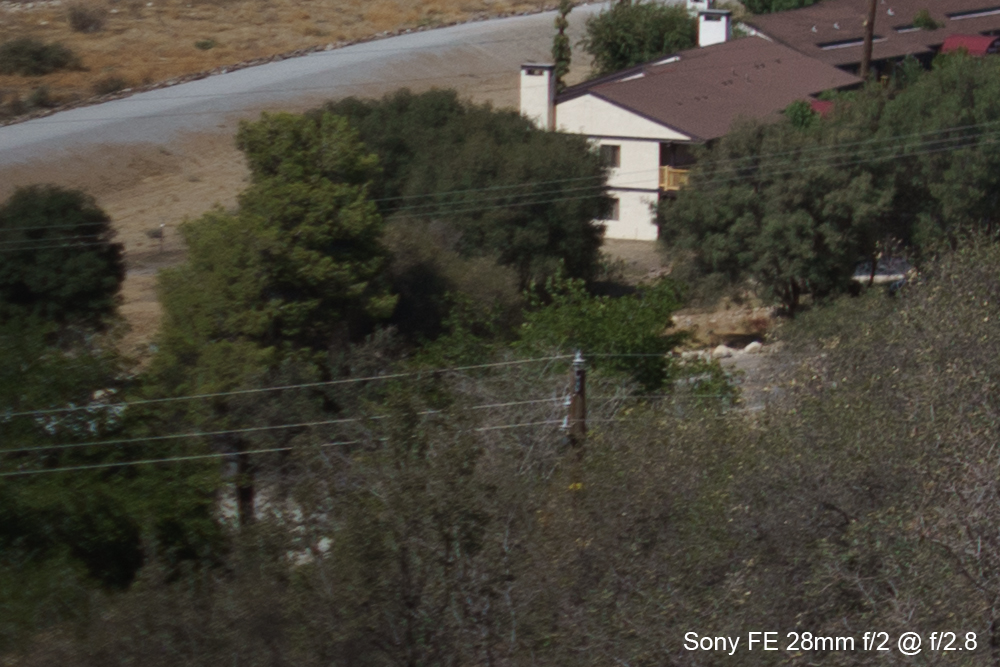 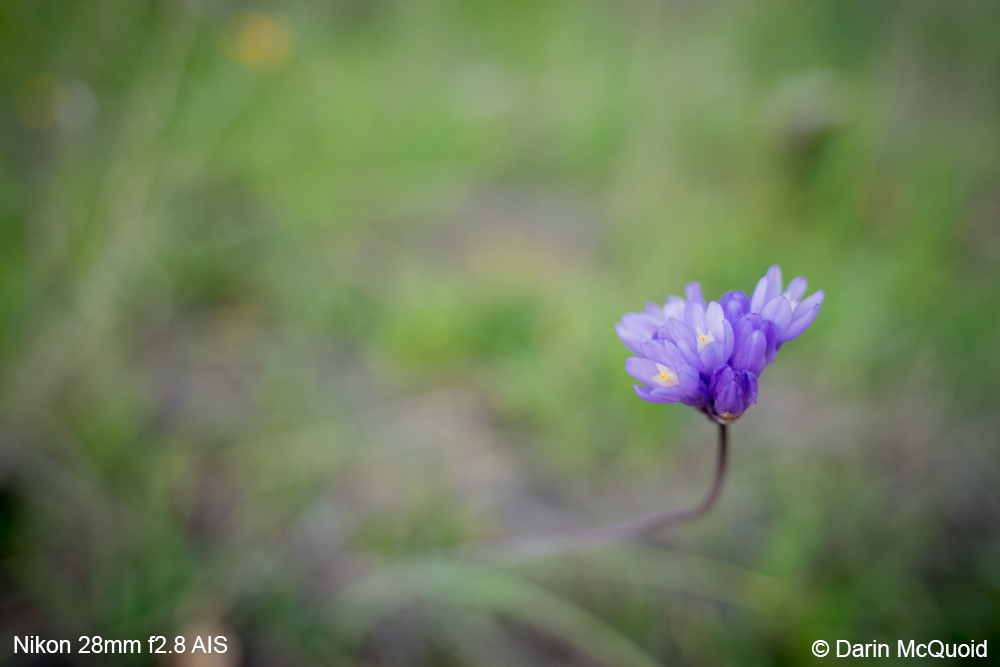 At infinity distance the Sony FE 28mm f/2 is really nothing too impressive. Decent sharpness but it fades in the corners which never really sharpen up, lots of distortion but minimal CA. Infinity is just one side of the store, let's take a look at the Sony at shorter shooting distances. 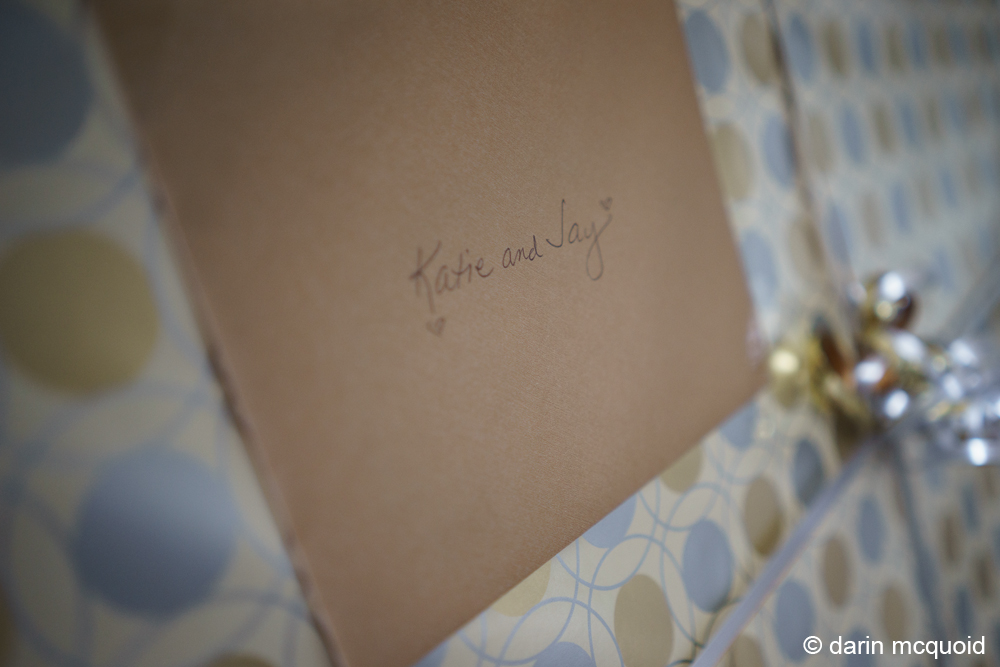 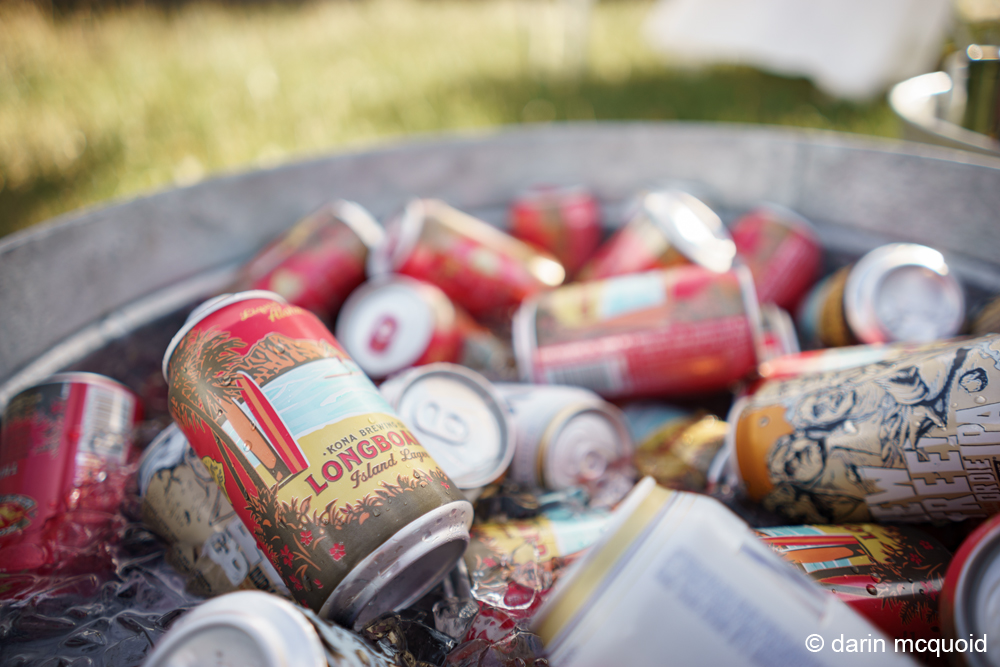 It has a great look, here at f/2.2, this image is already cropped considerably. 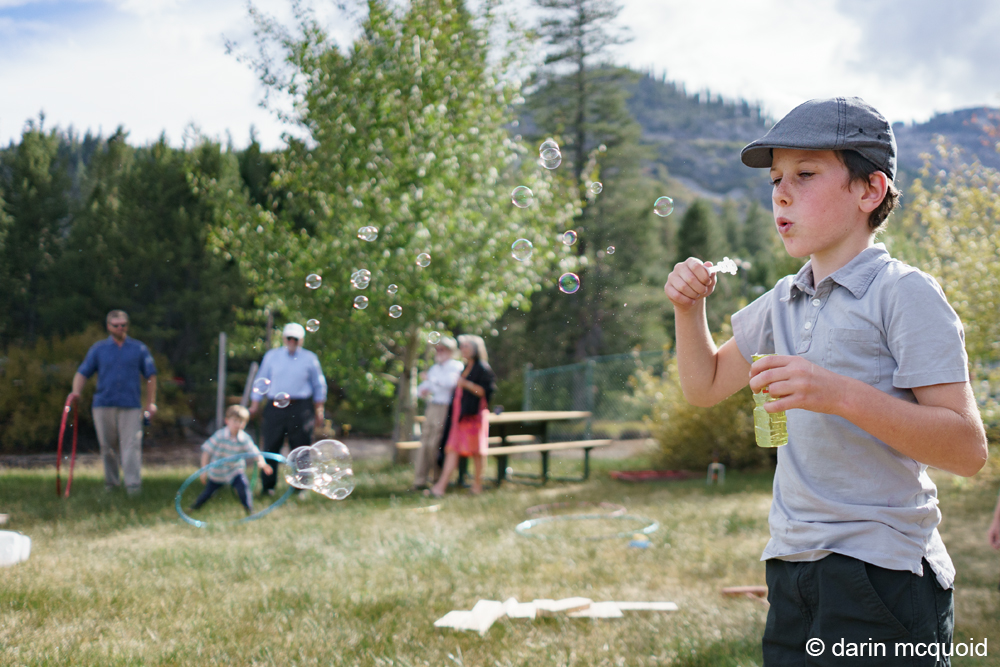 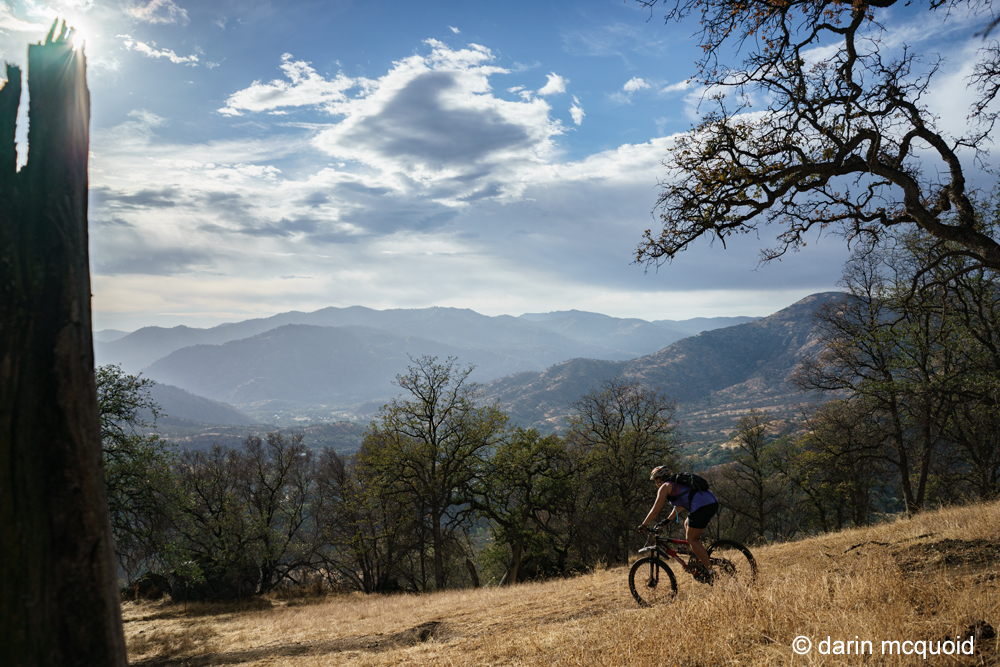 This image shows just how tricky depth of field can be with this lens, not how it's slightly back focused even at 50' and f/2.5 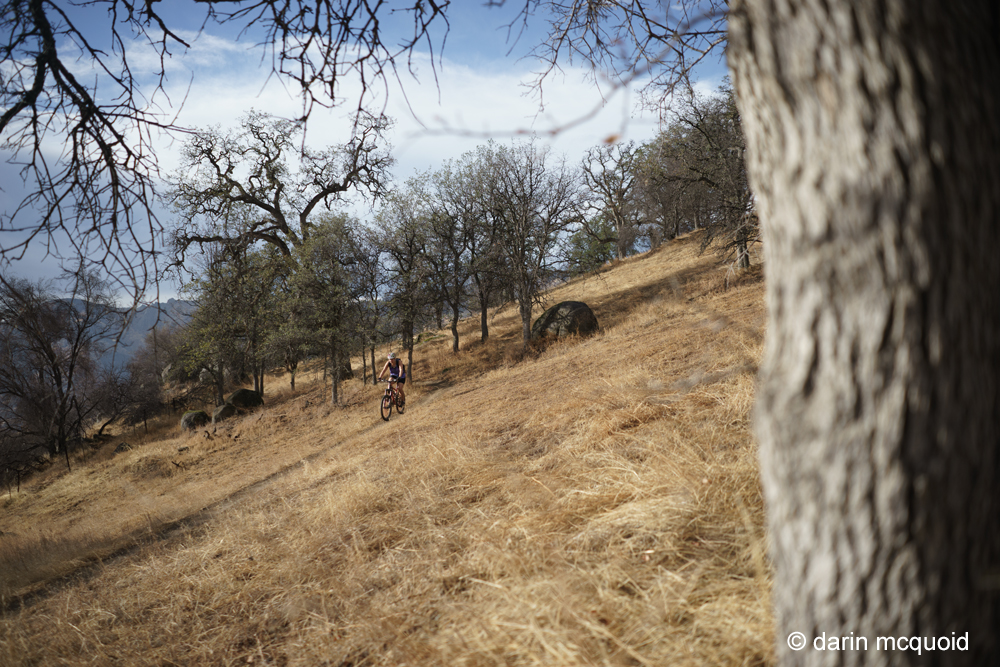 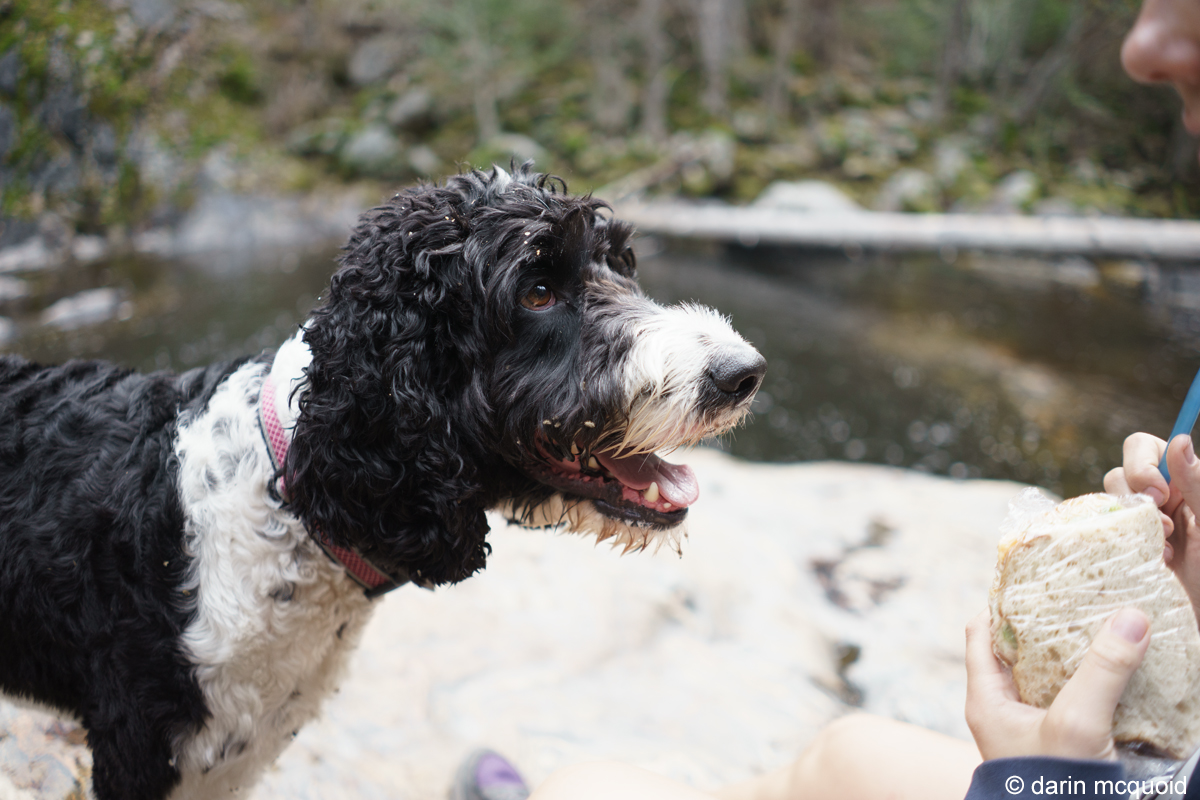 Here at f/4 we see how the background still has fantastic blur for a wide lens. 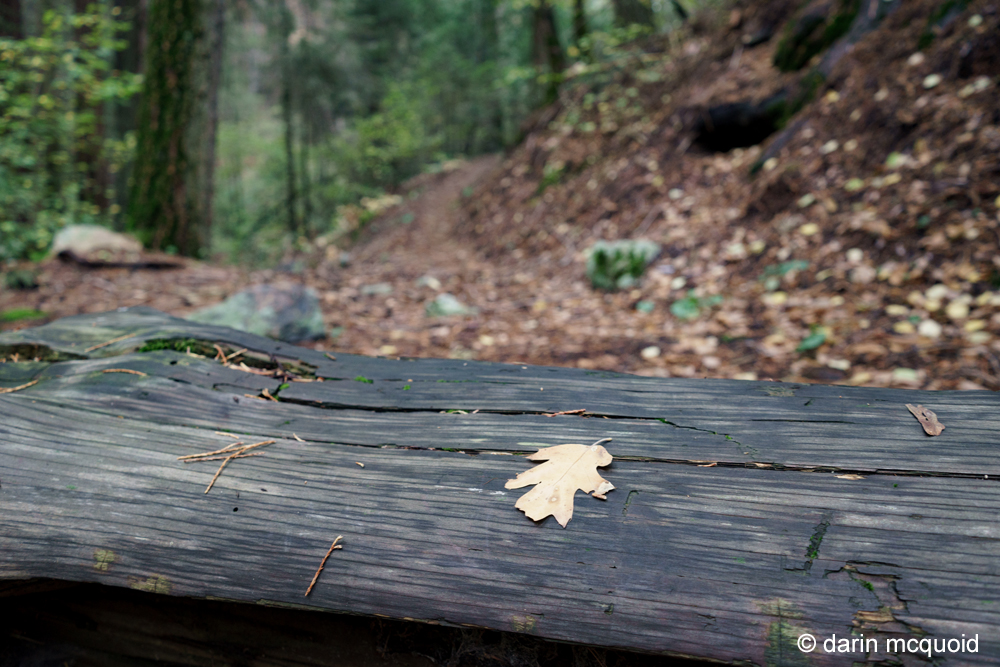 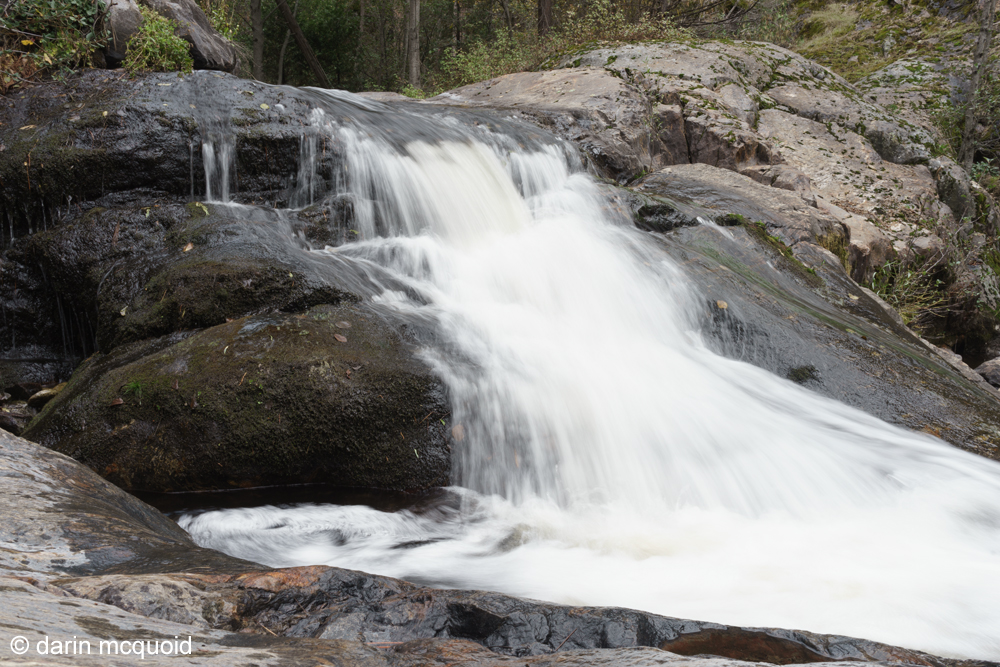 In the end of testing my feelings about the Sony FE 28mm f/2 are rather ambivalent. As mentioned before the bokeh is in general very nice for a wide angle. It has moments of glory and frusteration, mostly do to oddly shallow depth of field and poor infinity performance. In the end it's not the end all be all 28mm f/2, that has yet to be found. For landscape the Nikon Nikkor 28mm f/2.8 Ai-S outperforms it, but then the Nikon is outclassed for up photojournalist style work because of the Sony's superior bokeh, AF and subject separation at f/2. I was hoping to own just one 28mm lens and unfortunately, this isn't it.

A whole new round of testing in Test Two.