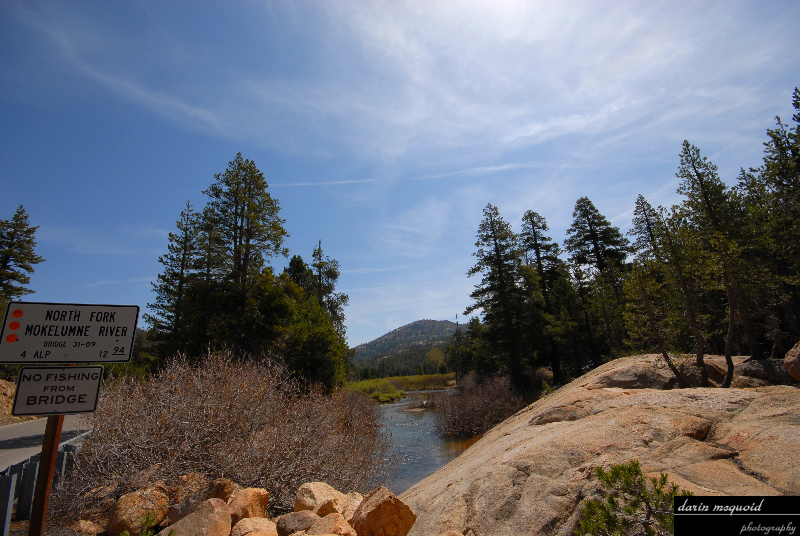 A three day epic wilderness adventure down Fantasy Falls of the North Fork Mokelumne is one of the hardest and most rewarding of the classic High Serra rivers.. The normal season for Fantasy Falls is sometime in June-July and dictated by the current year’s snowpack. Flows for Fantasy Falls is generally estimated from the outflow of Salt Springs Reservoir. Most years there is no outflow, making Fantasy Falls a complete guessing game.

Taking off South Silver on Wednesday, the only information we could gather through our network was that one person had checked the Highway 4 crossing and thought flows were too high. We debated spending more time in the South American drainage, but low flows and the temptation of getting on this classic prompted us to sacrifice a day of paddling to check flows at the crossing.


The gauge at the Highway 4 crossing of the North Fork Mokelumne. 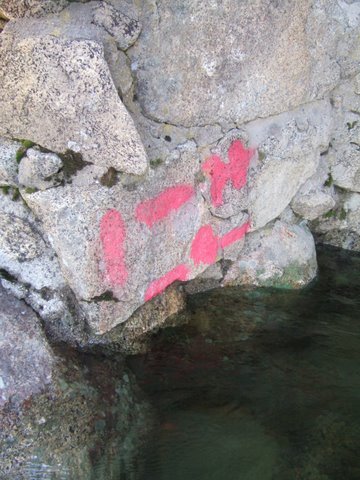 I literally jumped with joy when I saw the flows. In spring 2006 the run was done at the highest known levels. Their put-on flows is the high mark, and when taking off three days later the water was at the low mark. Having heard the gauge described I instantly knew that we would have optimal flows, as we were below their take-off flow mark, but well above anything resembling low water.


Not boney at all for our run either. 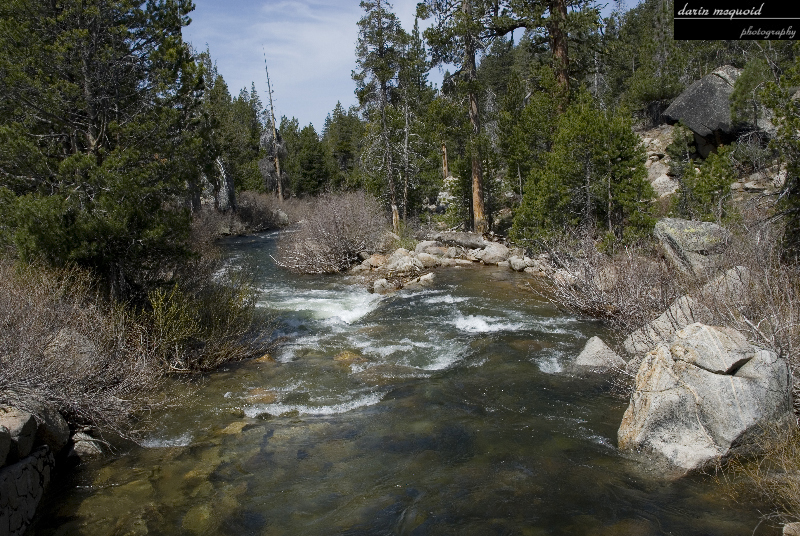 For years the rumor of Fantasy Falls was that you wanted the river low at  put-in. The Shasta boys proved this wrong, had an incredible trip and were still able to run the majority of the rapids at flows that would have initially seemed absurdly high. We found flows about 10" below their high mark and 3” below their low water mark.

Now that we knew we had the right water levels, we set off on a mission checking the weather for heat waves, restocking food supplies and setting the infamous three to four hour
shuttle. 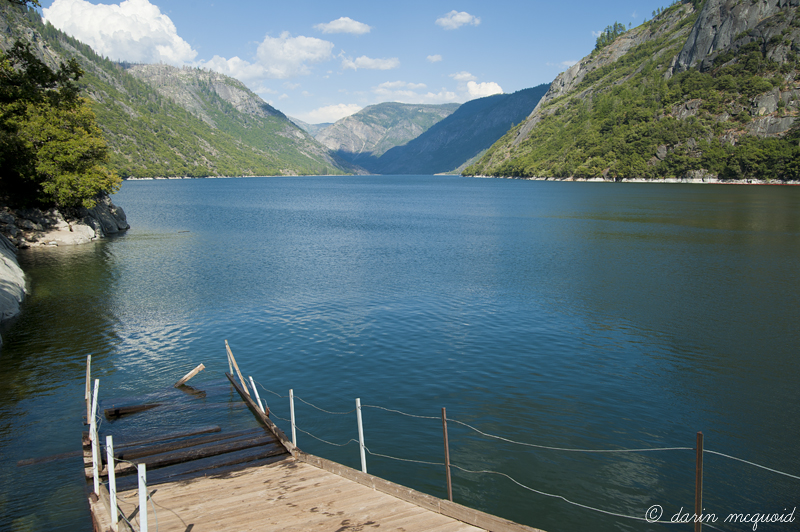 Fantasy Falls is generally considered a three day trip through the Mokelumne Wilderness, although it can be done in two long days with a shuttle driver. If you want to get an early start on day one, shuttle should be set the day before. The good news is that for a three day trip the first day on the water  can be short. There are two shuttle options, a long paved route on river right, and labyrinth of dirt roads on the left. On our way to the take-out we choose the paved roads and got our gear together at the beautiful reservoir.


Calaveras Dome from the shuttle road. 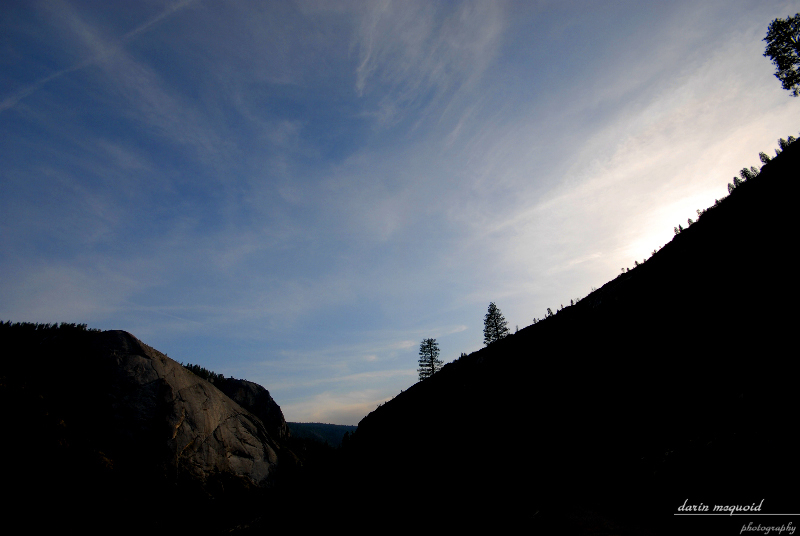 There were people camping everywhere near Salt Springs, so we decided to ask for directions on the left side shuttle, a reputedly faster route when it goes. A friendly group gave us some nice instructions and mentioned the road was a bit rocky, but they were able to work around the rocks in a small pickup truck. So we were off, loaded three deep with all our gear and kayaks in a Toyota Corolla, which was riding a bit low. Once we crossed to the left side of the river we started a routine of driving a little and then hopping out to throw rocks out of the way. The shuttle road was a lot steeper than we expected, and we needed some momentum to get the car up rock strewn road. The Corolla did us proud and we were relieved when we eventually hit pavement without getting a flat tire. With night setting in upon us we rallied down the paved road only to find it turned back into dirt and slowed our pace. 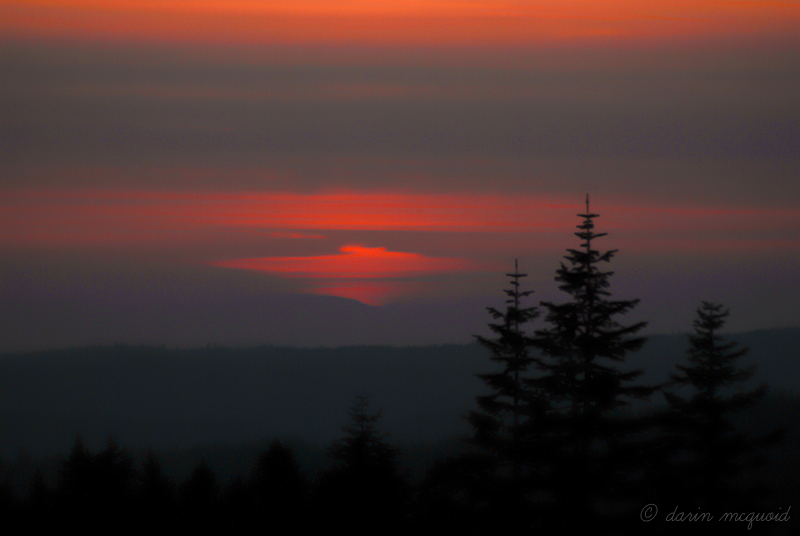 It also forked in many places, and we were off the area covered by the Mokelumne Wilderness Area map. We simply stayed on the most traveled road until we hit a large snow drift that impeded our progress and looked to be about three feet deep and about fifty feet long. We figured that another road must go through, and proceeded down a few roads that got too rugged for the Corolla, and eventually found what seemed to be an alternate route that someone had gone so far as to cut out a few downed trees. Optimistically we figured we must be on the right track, but after another fifteen minutes of slightly rowdy dirt road we came to another large tree across the road that hadn’t been cut. Turning around we noted that where the logs had been cut was rather narrow, and laughing at ourselves realized that we had been squeezing the car through some gaps cut wide enough for four-wheelers. Turning around we hung our heads in defeat and headed all the way down to Angels Camp and a long shuttle. All told we arrived back at the Highway 4 crossing around midnight, after a six hour shuttle mission. I think we were about four miles away from Highway 4 when we hit the snow drift that turned us around. 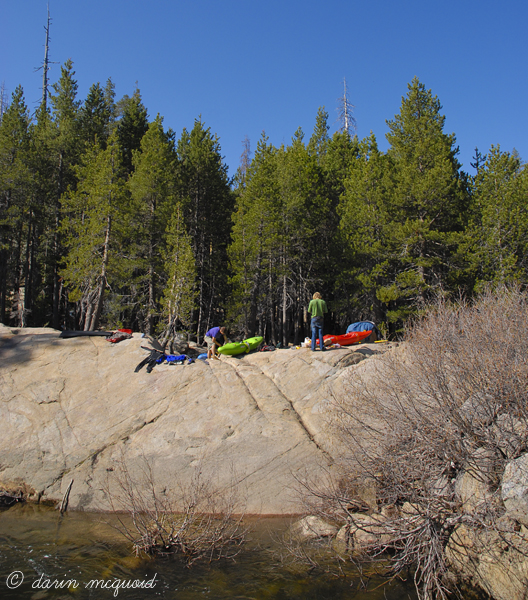 Once again we had another day of beautiful California weather while packing our boats at the put-in for Fantasy Falls. We put on the cold water around ten-thirty in the morning expecting a bit of warm up into the run. No warm up was in sight as we rounded the first corner and faced a long, steep, continuous boulder garden. Chris Korbulic took the lead and with some great boat scouting we made quick time down through the steep and manky boulder gardens. Rounding one early corner we scrambled for eddies above a large log jam that the whole river went under, really one of the sketchiest spots in the whole trip because the eddy above it was only large enough for one boat. Thankfully we had been hopping eddies all the way around the corner and were each able to take our turn getting into the small eddy above the portage.


Taylor running the cleanest drop in the early day one boulder section. 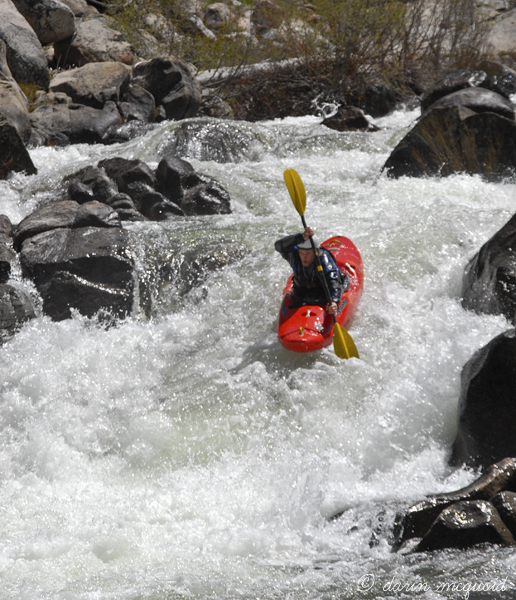 If flows are any lower the first section of boulder gardens is just terrible. Thankfully there is a trail on river left, and it's much easier on the boat, body and blade to just walk this whole section at low flows. 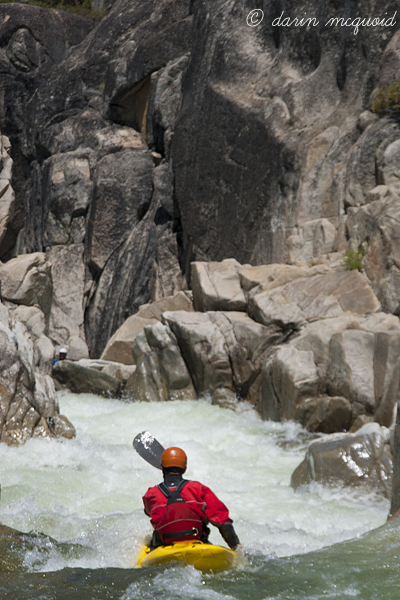 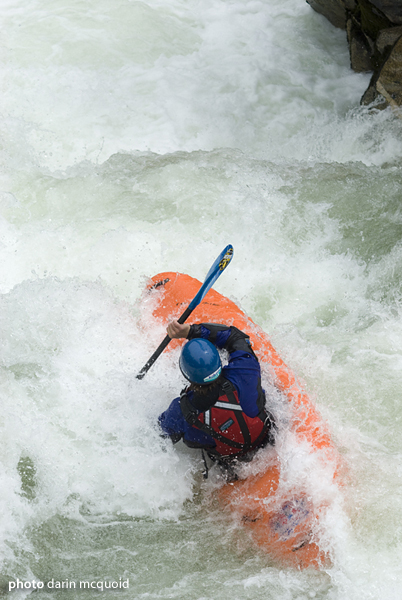 Our first scout of the day was this gorgeous little mini gorge. This mini gorge shows the true character of Fantasy Falls, long multiple move rapids set in stunning scenery. The first day is know as the “bad” day of Fantasy Falls, but at high flows it’s better than many others, although at low flows it deserves to be known as the bad day.

Davis Gove runs the first falls of the run. 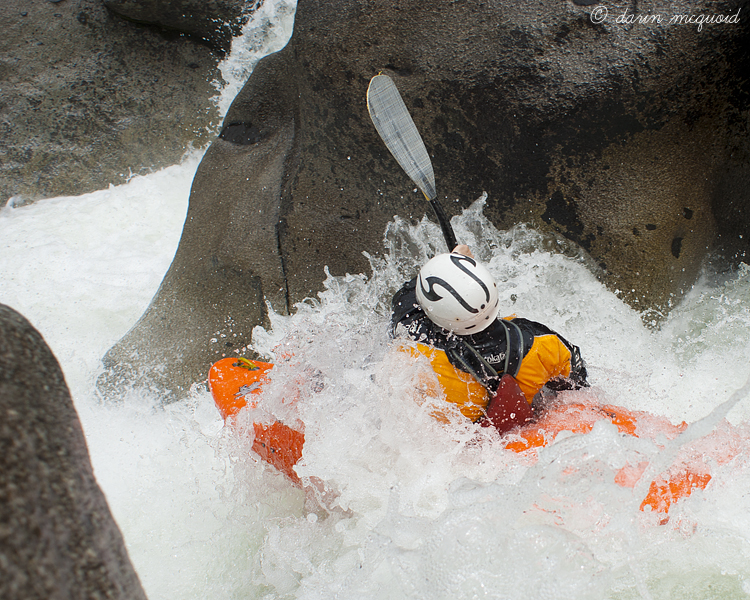 The same drop on a low water run, Jonas Grunwald. 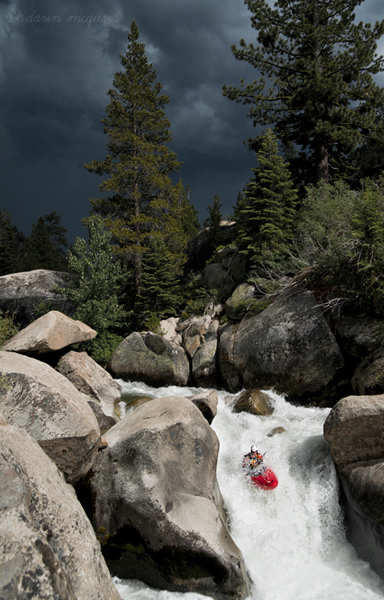 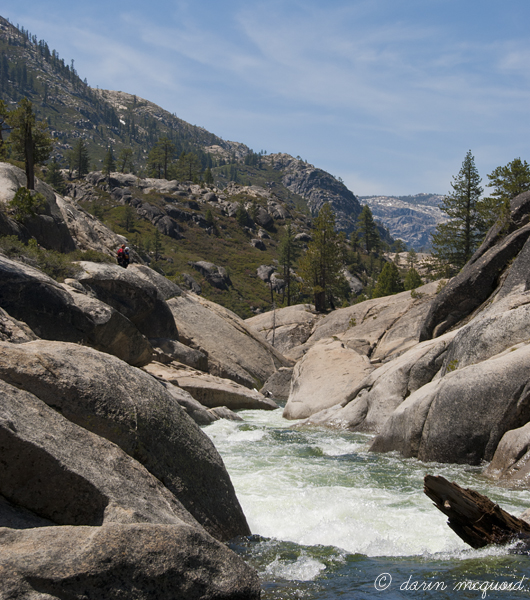 I say unofficial gorge because people say there are three major gorges on Fantasy Falls, but there are really over five distinct gorges all containing large rapids. Shortly after this scout we were down in the “First Gorge” which does contain the largest rapids of day one. Chris and I gave it a scout high on the right and deemed it good to go, although we noted one rapid with a big hole + pocket combination that didn’t look like it would be fun to be in.

Back in our boats we gave verbal of the first two drops to Kevin and Taylor and headed downstream. We all eddied above the large hole rapid, and I probed while Kevin and Taylor scouted. In this rapid the water pushes up onto a large midstream boulder, then about twenty percent of the water went left into a chunky looking mess, and the rest charged right and into the pocket hole. Perhaps five percent of the water actually climbed over the rock, and the line was to drive hard at the rock and try to boof past the hole, without getting caught in the jet of water going straight into the hole. I started off in the center with a slight left angle, and once I got near the boulder the jet of water moving right caught me and I drove hard into the hole, punching through to the right wall and working my way out upright, glad I hadn’t gone upside down against the wall where it would have pulled me back into the pocket. Over the years I have seen this hole dish out several swims. There is an easy portage on the right, and unless flows are low I don't mind walking.

At medium flows we portaged the drop on a 2008 trip. 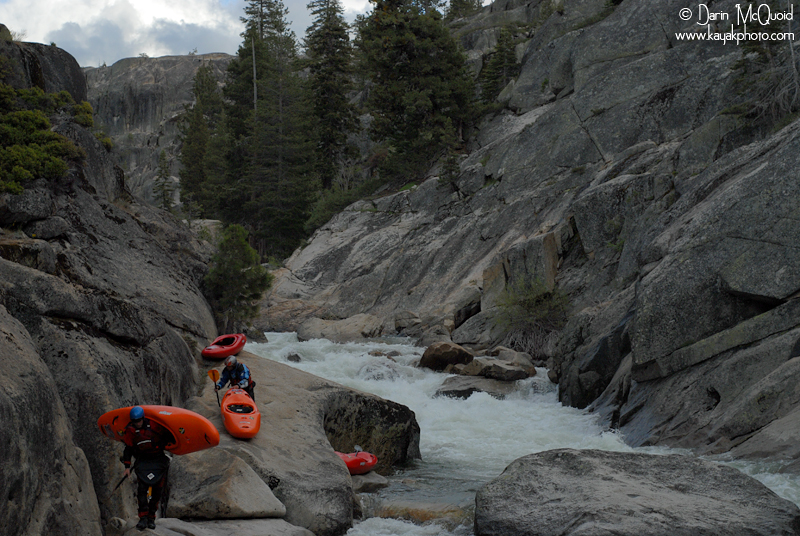 Downstream we pushed on through several large ledge drops, scouted one exceptionally large and long rapid that goes but can be portaged on the right. It's worth noting that at low flows this one is full of sieves and almost a mandatory portage, but the high water cleans it up.


Devin Knight running the same drop at medium flows in 2008. 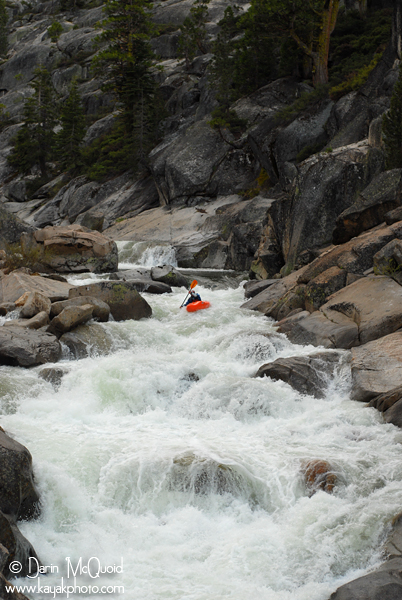 Below the long rapid we breathed a sigh of relief. Light was already fading from the canyon, but the drop below we recognized from Seven Rivers, and from the beta we had our campsite was supposed to lie just below. With the light gone from the canyon I ignored the shot and opted to probe the fun looking rapid. All our lines had varying degrees of success, but the rapid was more forgiving than it looked like.


Ryan and Devin Knight in the notch at medium flows, 2008. 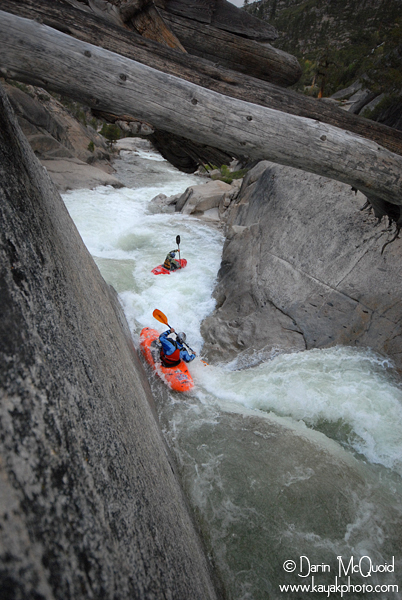 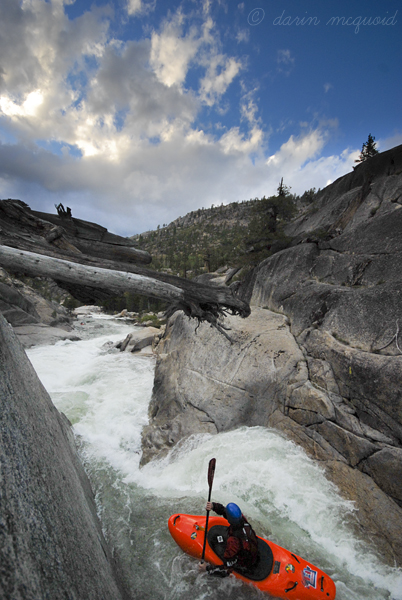 A late in the afternoon slow shutter shot of said rapid. 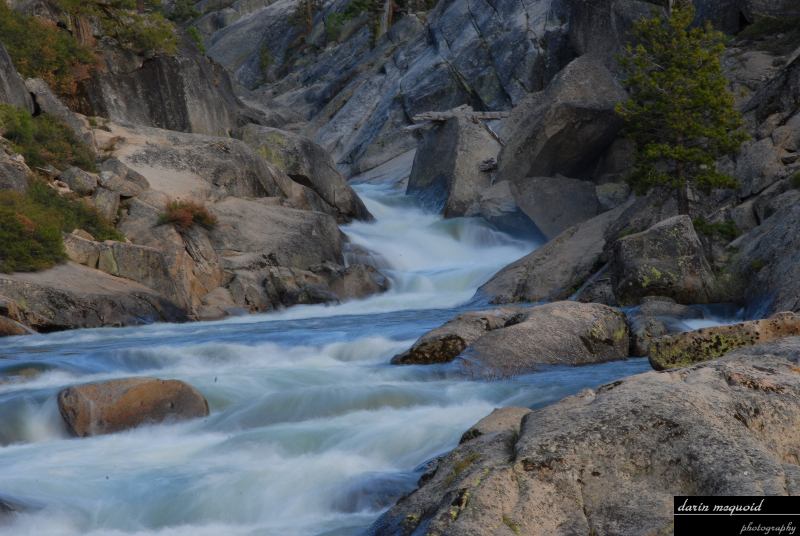 Looking back at the same with low flows. 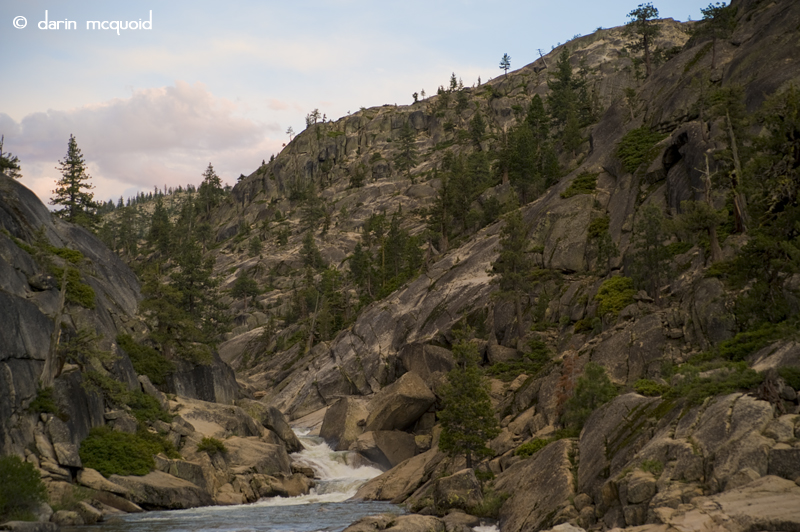 As promised a gorgeous campsite was just downstream with fresh water coming in on the right and a big gorge directly downstream. We settled in for the night glad to be at camp, nervous about the following day and the challenges we would have to face.


The good life on Fantasy Falls. 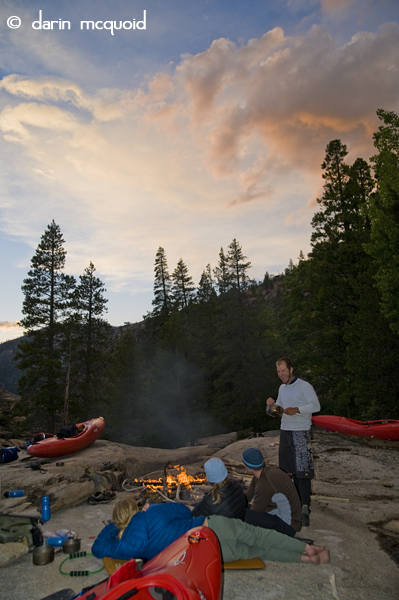 Sometimes you just have to pay your dues in the mank. 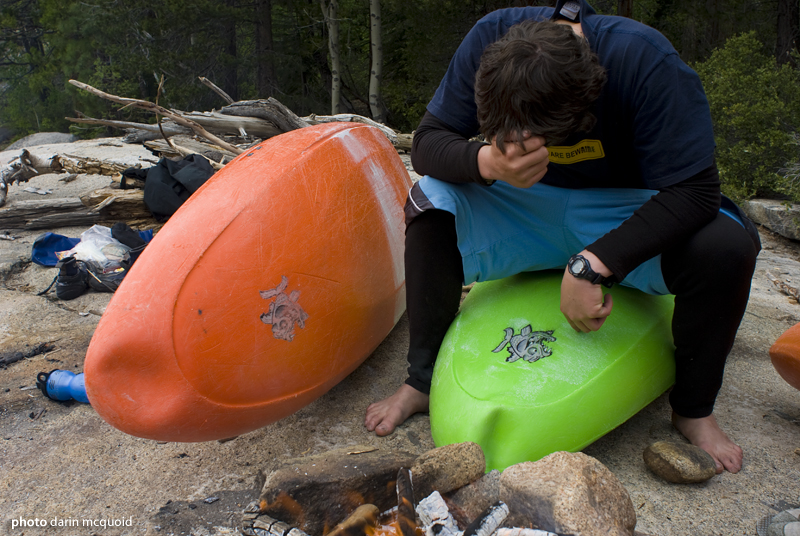 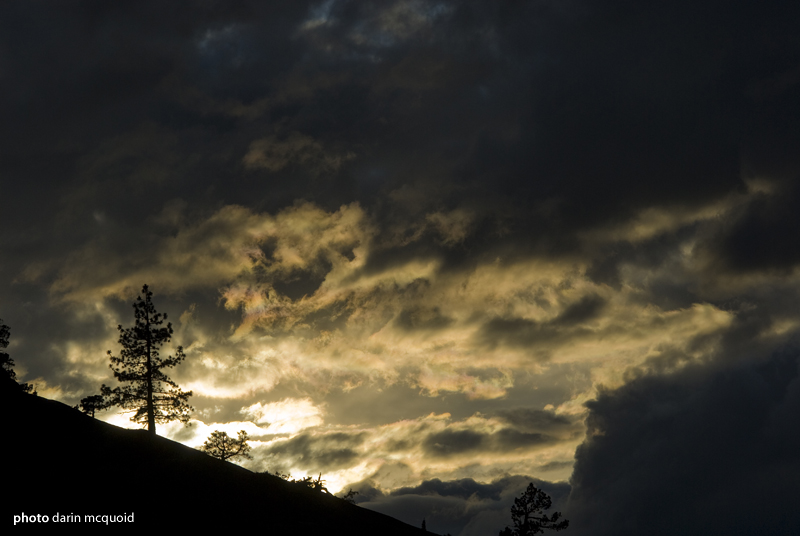 And so ends day one of Fantasy Falls of the North Fork Mokelumne. Continue on to day two.


Google Maps Marker for camp one. Scroll down to green arrow.