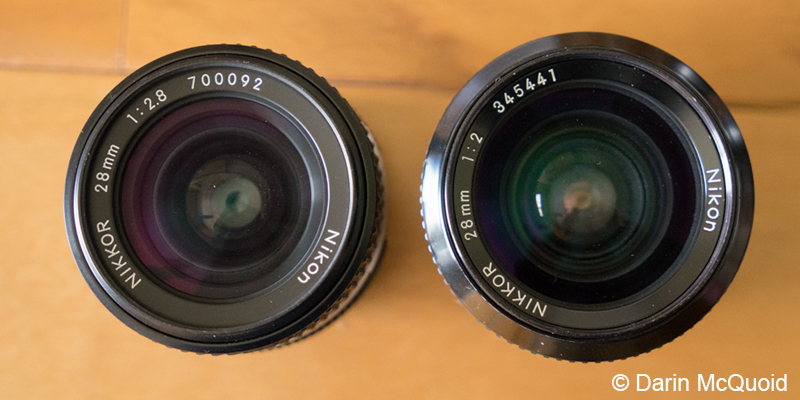 Starting production in 1970 the Nikkor 28mm f/2 AI has 9 elements in 8 groups focusing down to 0.3 meters (11.8 inches) and weighs 12.5oz. Adjusted for inflation it would cost $950 new today. I sold my original one when I bought the Nikon 24-70mm f/2.8 AF-S. At the time the new, expensive Nikon zoom out-performed the old prime. One year later, not so much. Complex zooms are fragile. As I'd sold my old Nikon 28mm f/2 Ai-S, I tried several other used copies. Perhaps it wasn't as good as I remembered it being? Three copies were so bad I stopped looking. Then I picked up one "with a scratch" for $50. At that price I had to try again. Perhaps the older pre-ai versions are prone to issues over the years, or the Ai and Ai-S versions are better, regardless, this one performed like I remembered.

A look at infinity in full sunlight. Shot with the Sony A7 on a tripod with high enough shutter speeds to rule out movement (1/4000-1/500). Focus was done in the center wide open with no adjustments for focus shift. White balance set to sunlight.  Mouse over images for a swap.

In the center, well I can't really tell. I've found that the Pentax 28mm f/3.5 has more of the "Zeiss look" than any Zeiss lens I've used. Micro-contrast. 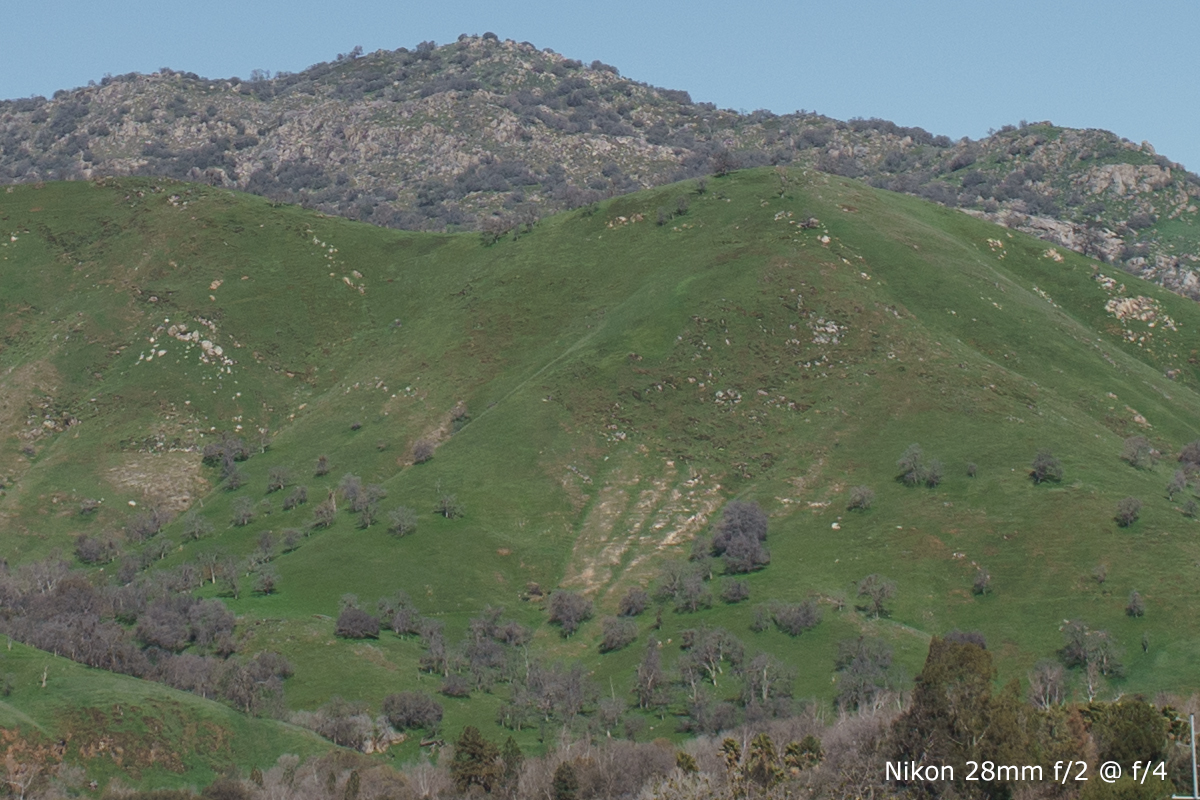 In the corners at f/4 the Pentax shows more vignetting and resolution. 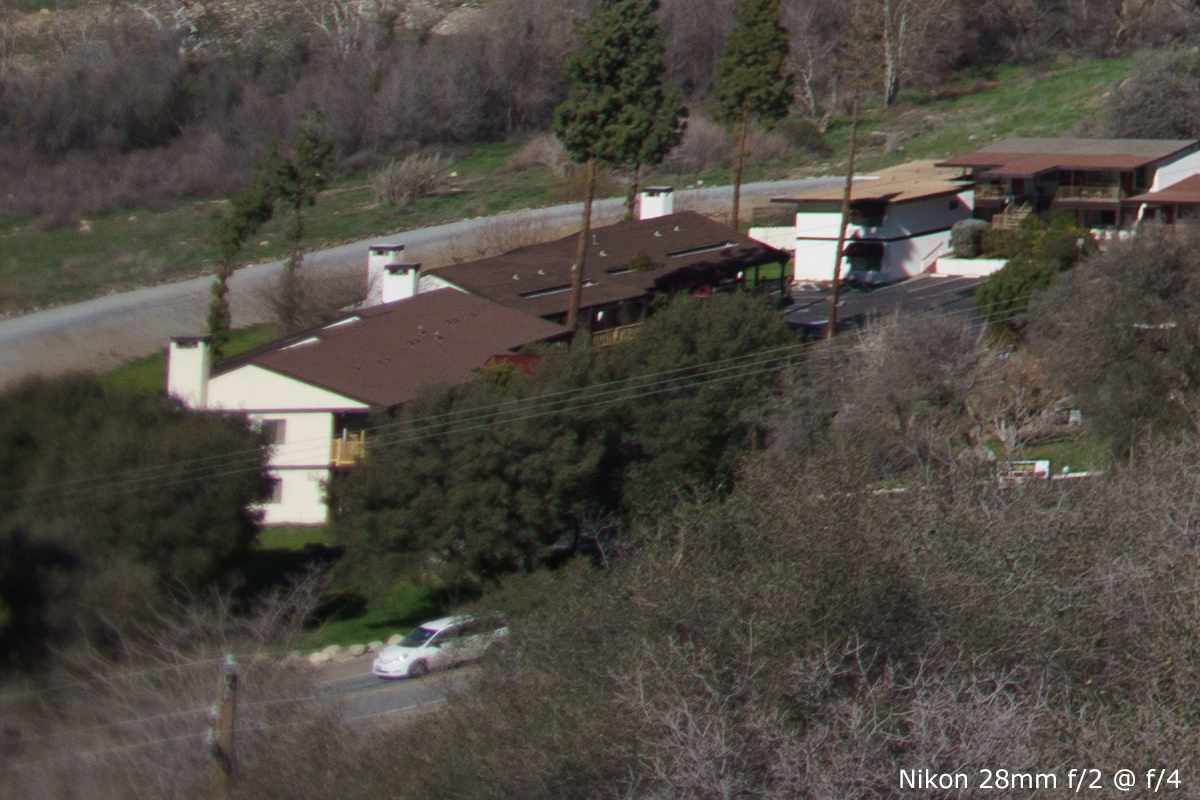 At f/5.6 exposure is similar, as well as the color, although the Pentax has a more vignetting. 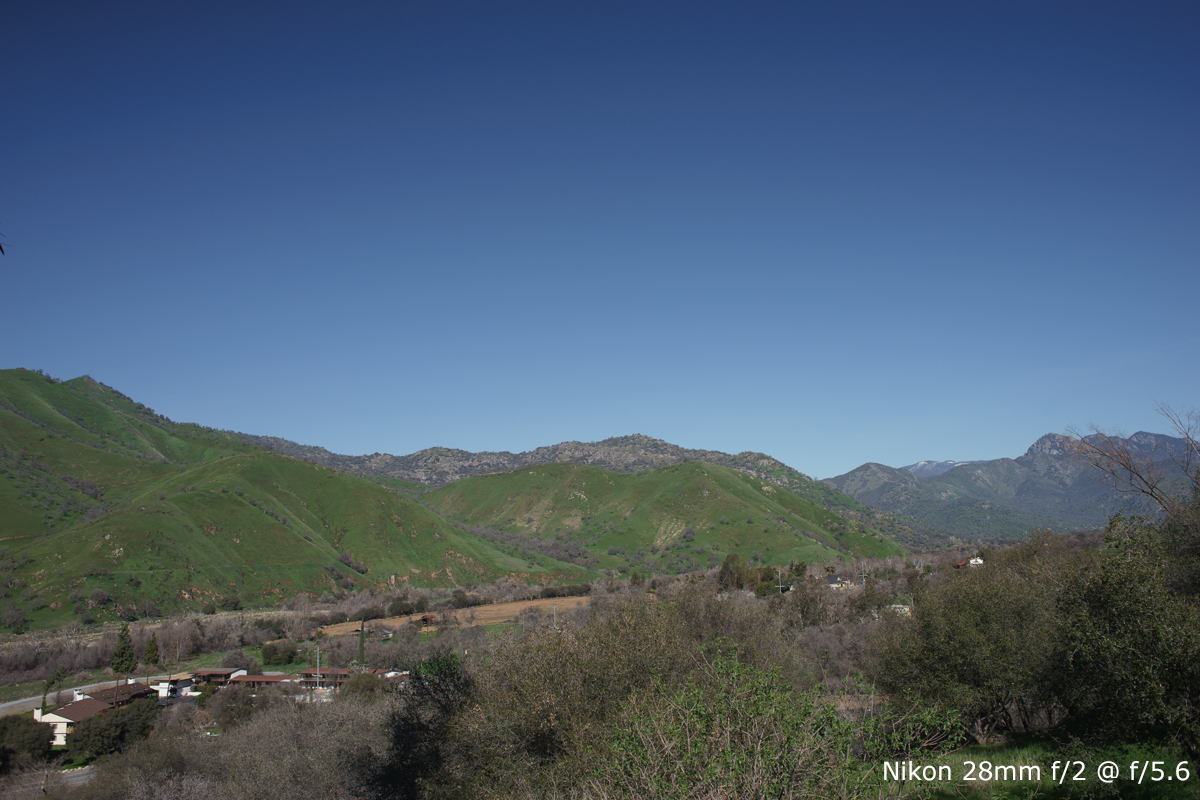 At f/5.6 center crop I'd give the Nikon the slightest nod.

In the corners at f/5.6 we're getting close, but I'd give the Pentax the nod for resolution and the Nikon for superior vignetting. 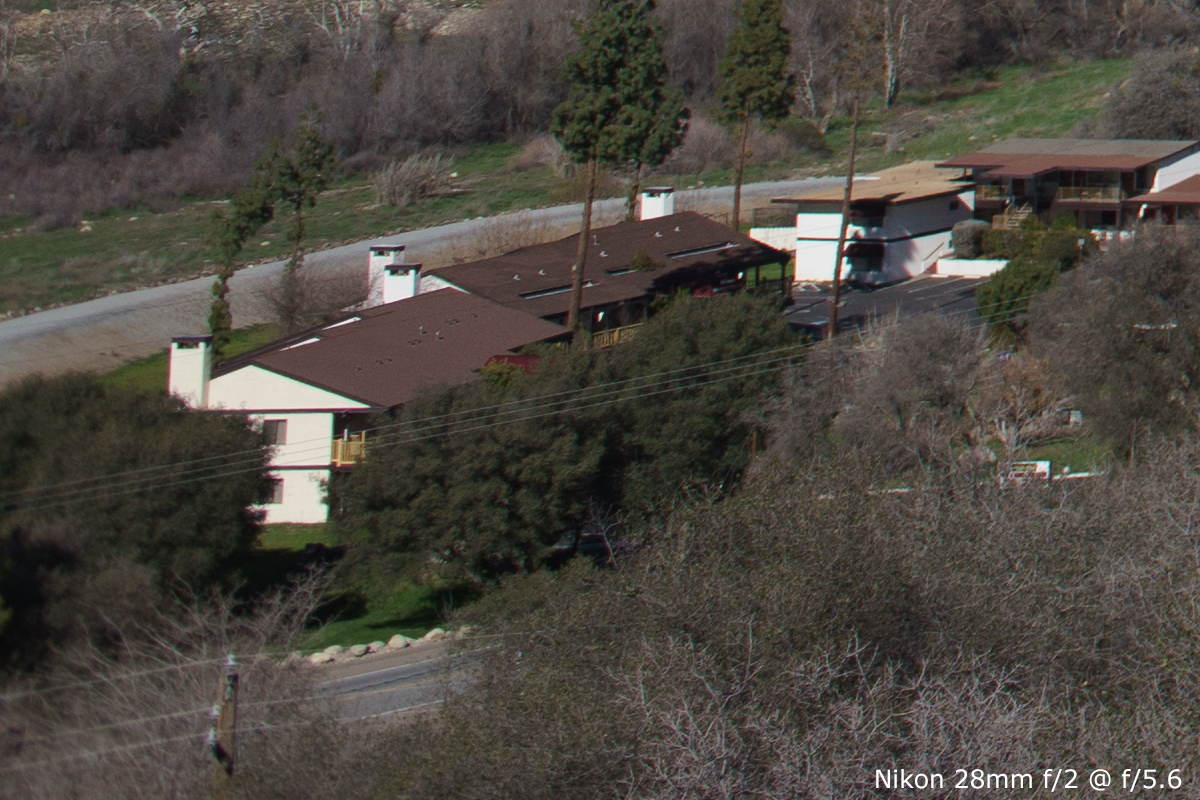 For two different brands I'd say their color reduction is incredibly similar at f/8. 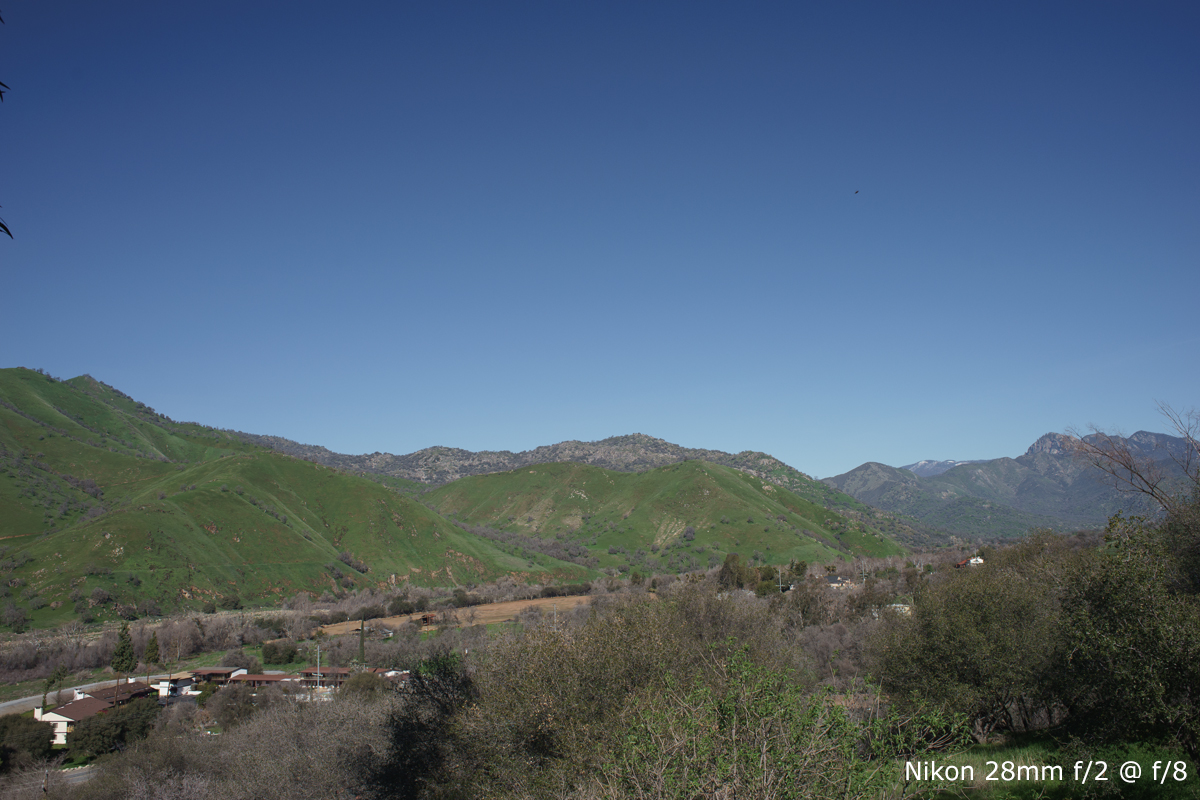 The nod goes to the Pentax for micro-contrast in the center at f/8. 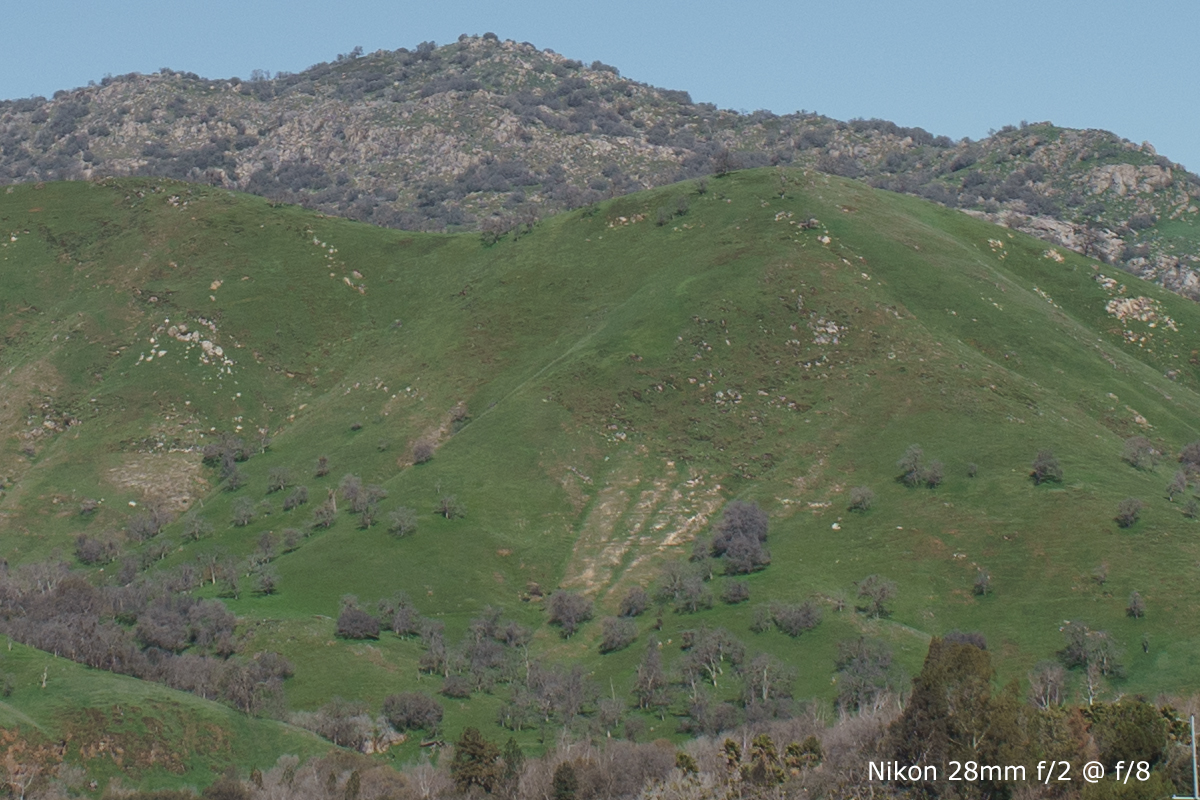 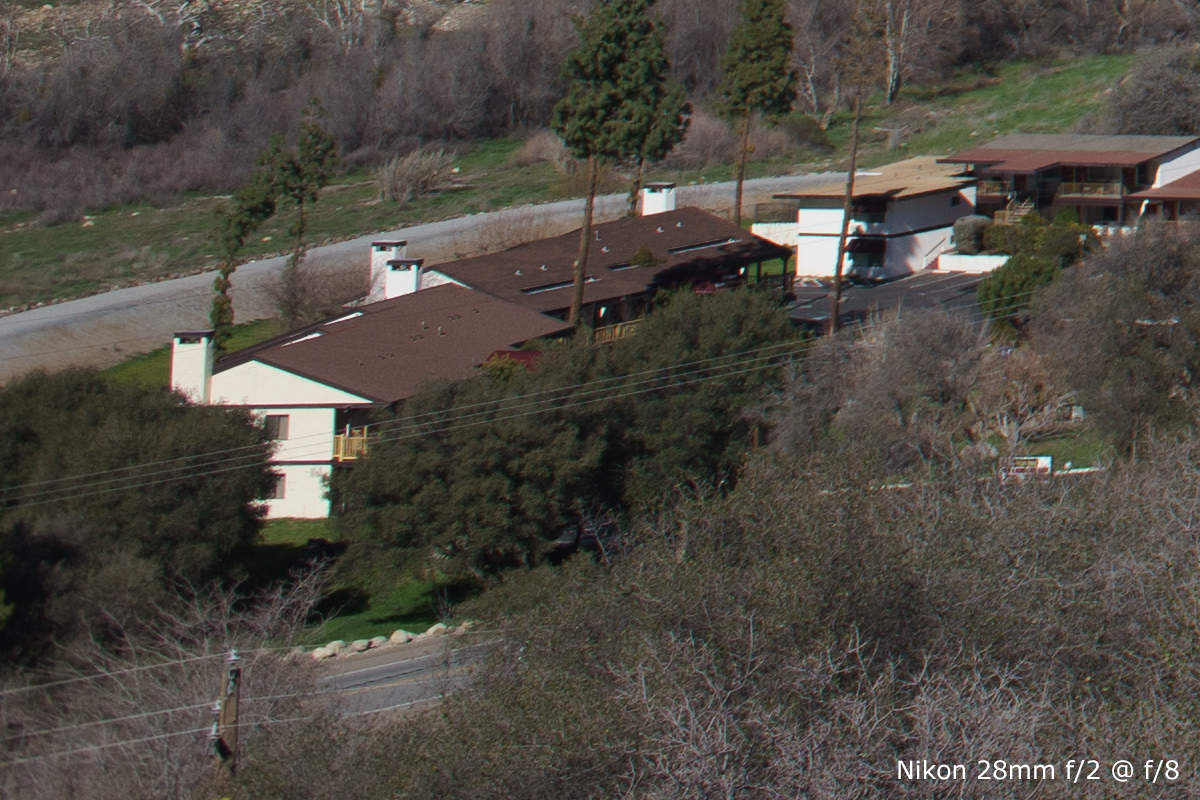 At f/11 it's disturbingly identical.

The same could be said for the center.

This copy of Nikon 28mm f/2 Ai is incredibly good in the corners, yet the Pentax K 28mm f/3.5 is better. More contrast, resolution and less chromatic aberration.

Unlike the earlier tests (1 and 2) where the Nikon 28mm f/2 performed much worse, here it's close to the Pentax K 28mm f/3.5. It's a much more versatile lens with its faster aperture allowing one to shoot at 1/100 of a second instead of 1/25 in the same light. Personally I'll take the overall slight resolution trade off, especially when they can be purchased at similar prices - and of course if you get a good copy. I've never seen so much sample variation in one lens, perhaps Nikon improved construction from the Ai version on. Personally I'll avoid any of the previous "hill and dale" focusing ring versions, each one I tried had issues.