Briefly made from 1976-1977 with 8 elements in 7 groups I wandered upon a nice review showing the Pentax SMC 28mm f/3.5 to be an impressive lens. With a value in the ~$100 range it was easy to purchase one. One of my favorite things about shooting legacy Nikon lenses is that there are incredible databases, that other legacy brands just don't have. If you look at that list you may have noted that Nikon made not one, but three lenses, with a field of view wider than 180mm but that's a whole different story (that I'll never be able to afford looking at).


Although a touch longer than the Nikon, the Pentax is considerably slimmer than either lens. 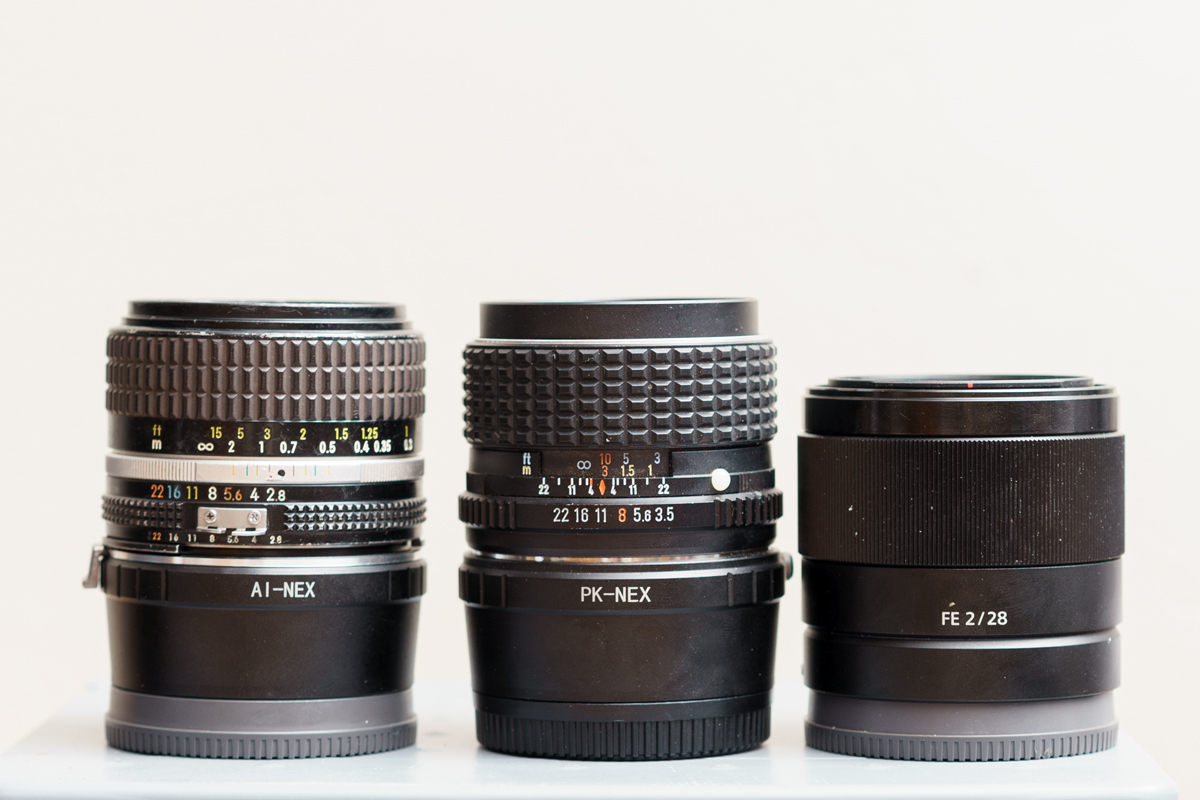 Visibility on this day is well over twenty miles. Shot on a tripod, shutter speeds fast enough to eliminate any kind of shake. Manually focused on the barn just off center. Lenses focused off center on the barn, at maximum aperture and focus left there, no adjustments made for focus shift or field curvature. Lens correction turned off when applicable. White balance set to daylight. As the previous reviews showed that at wider apertures the Nikon is sharper in the center, and the Sony in the corners, a true test would be putting the Pentax against the Nikon off center and Sony corners. As the aperture gets around f/8, I switched to the Nikon as it exceeds the Sony at that point.


Nikon and Pentax at 1/2000 and f/4, vignetting of the old Pentax is not too surprising it's almost wide open. 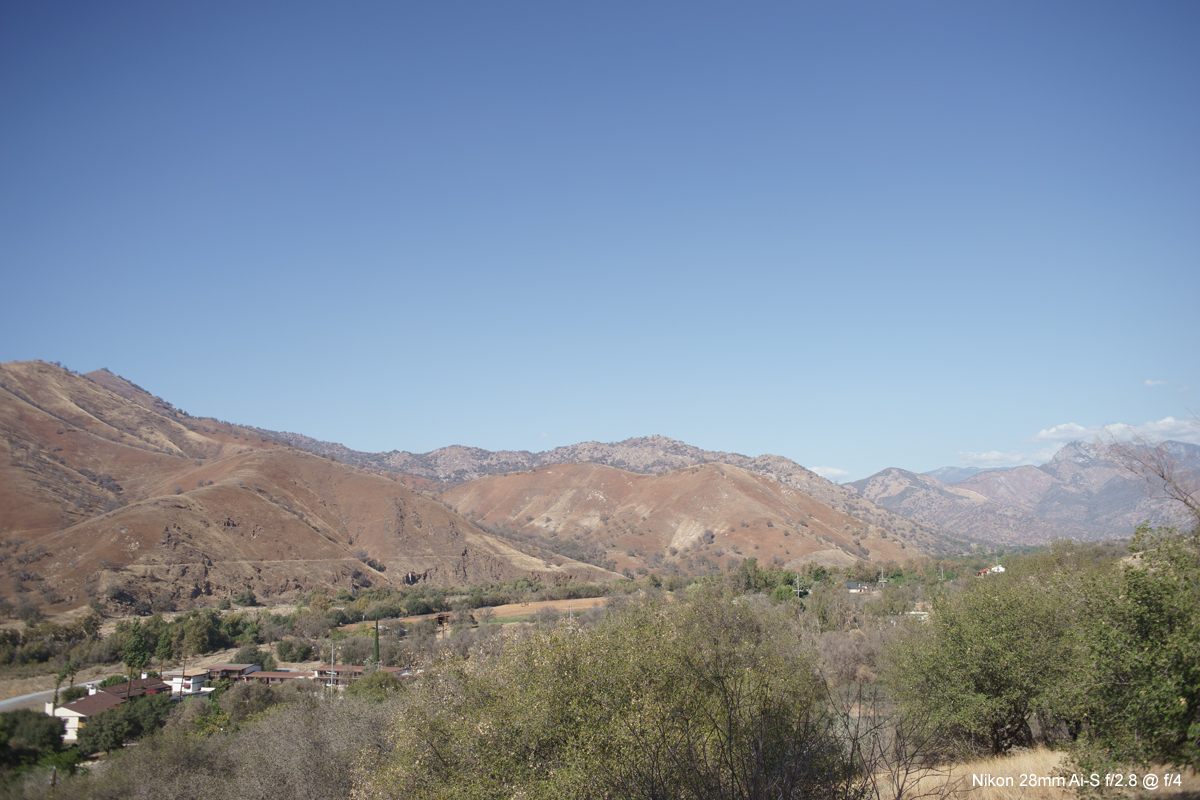 Off center I'd say it's a toss up between the Nikon and the Pentax. Resolution perhaps Nikon and contrast Pentax. 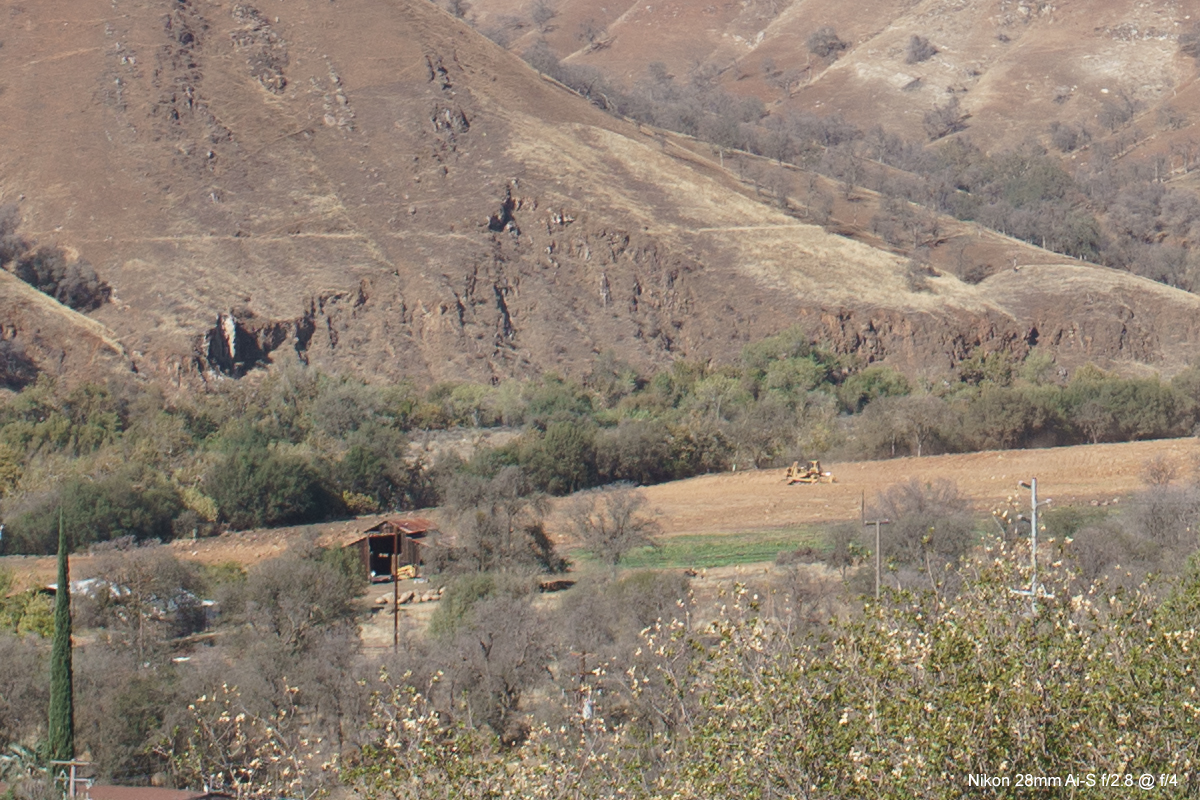 In the corners at f/4 the 38 year old lens shows superior detail. 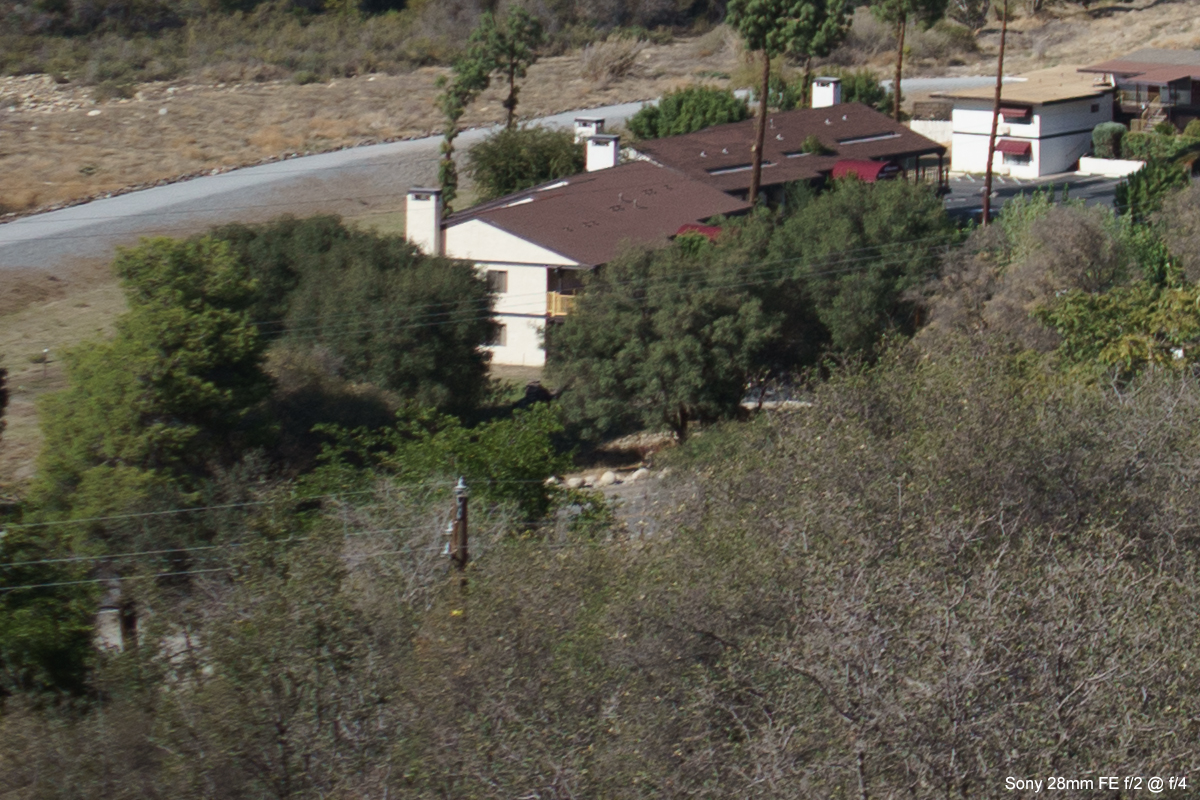 Let us move on to f/5.6, exposure and color balance are identical, the vignetting is gone so we'll ignore the whole scene image and go to the crops. 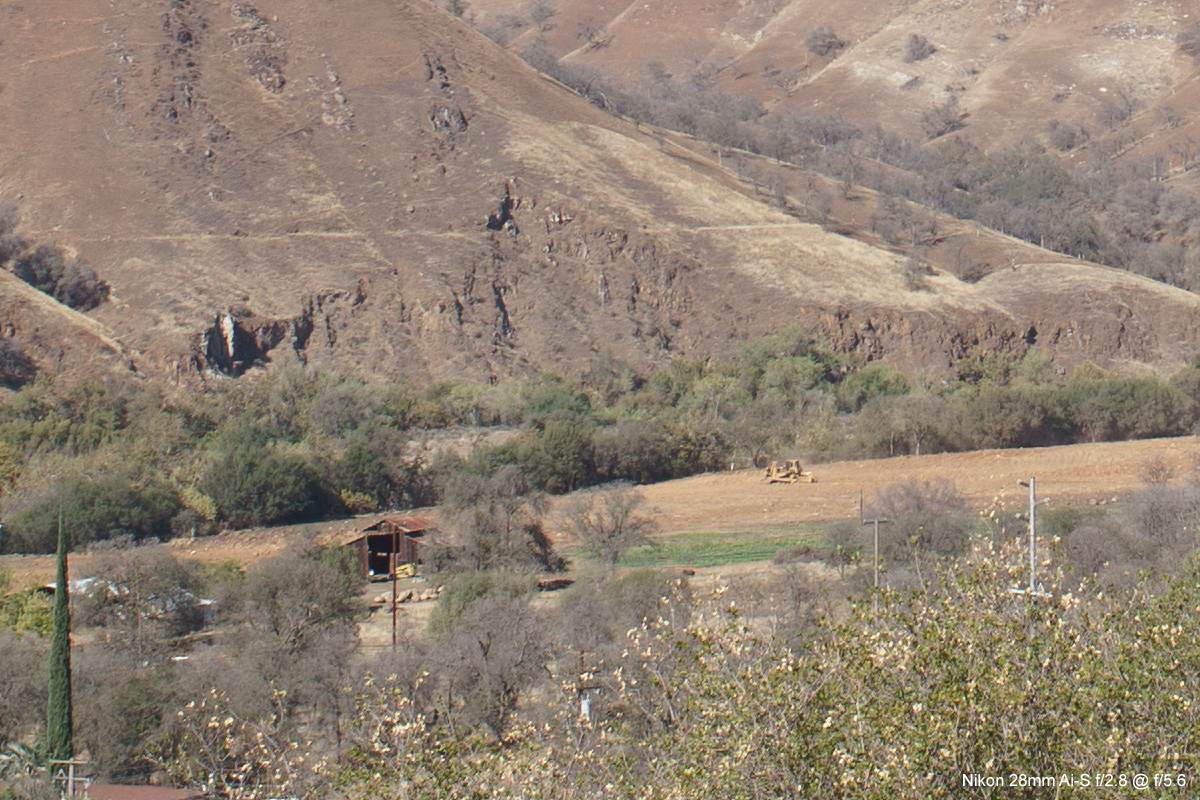 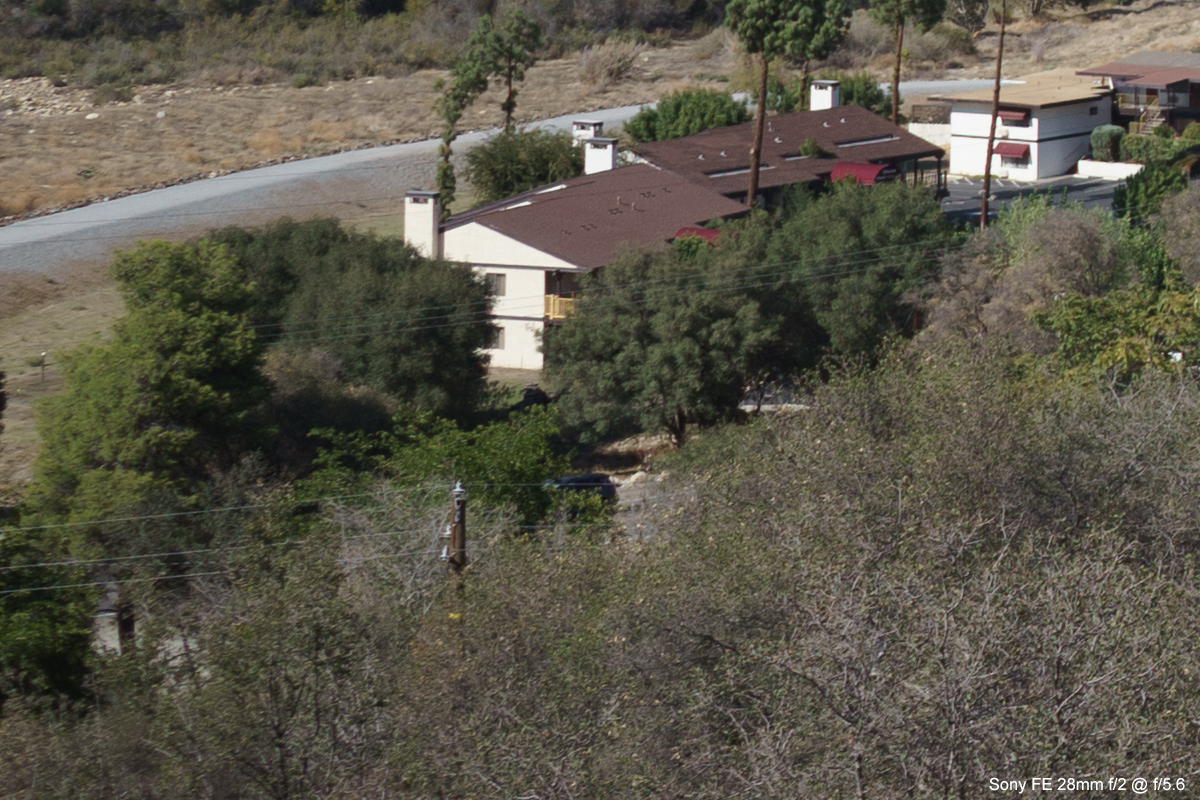 Off center crops at f/8. 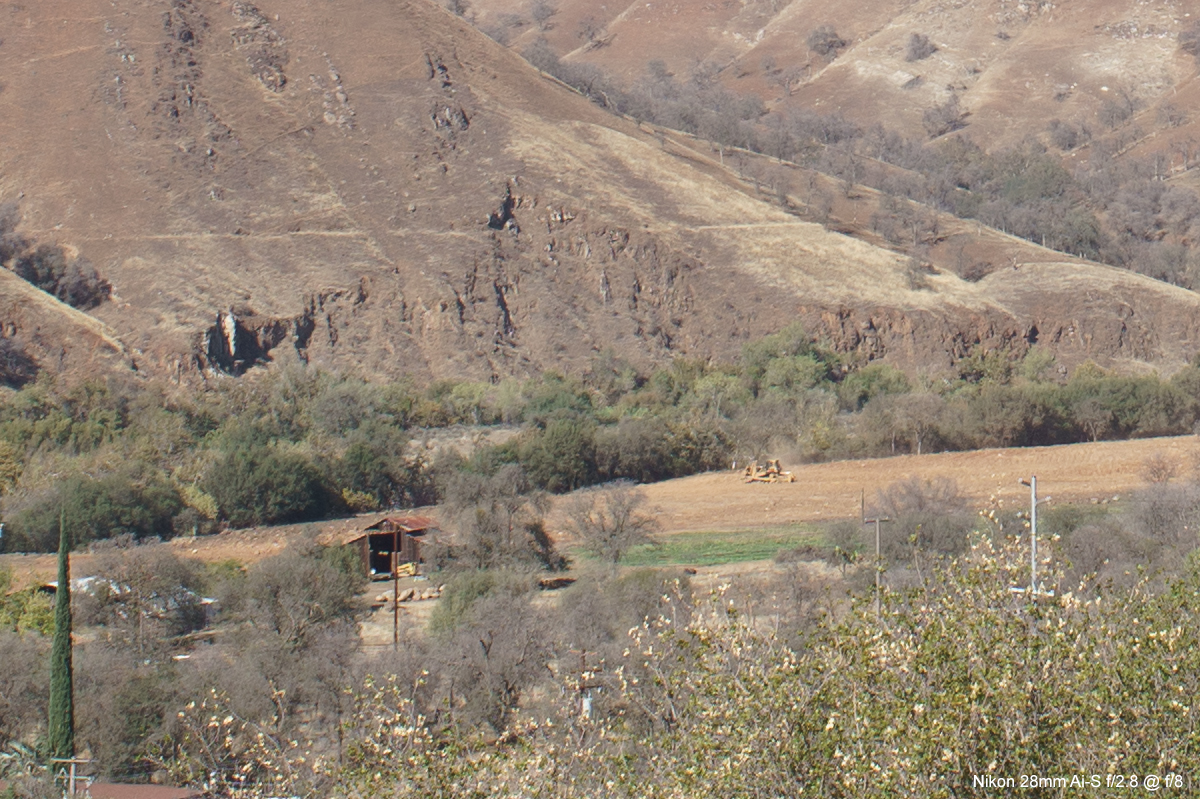 Corners at f/8, the Pentax is just further ahead in the far corners. 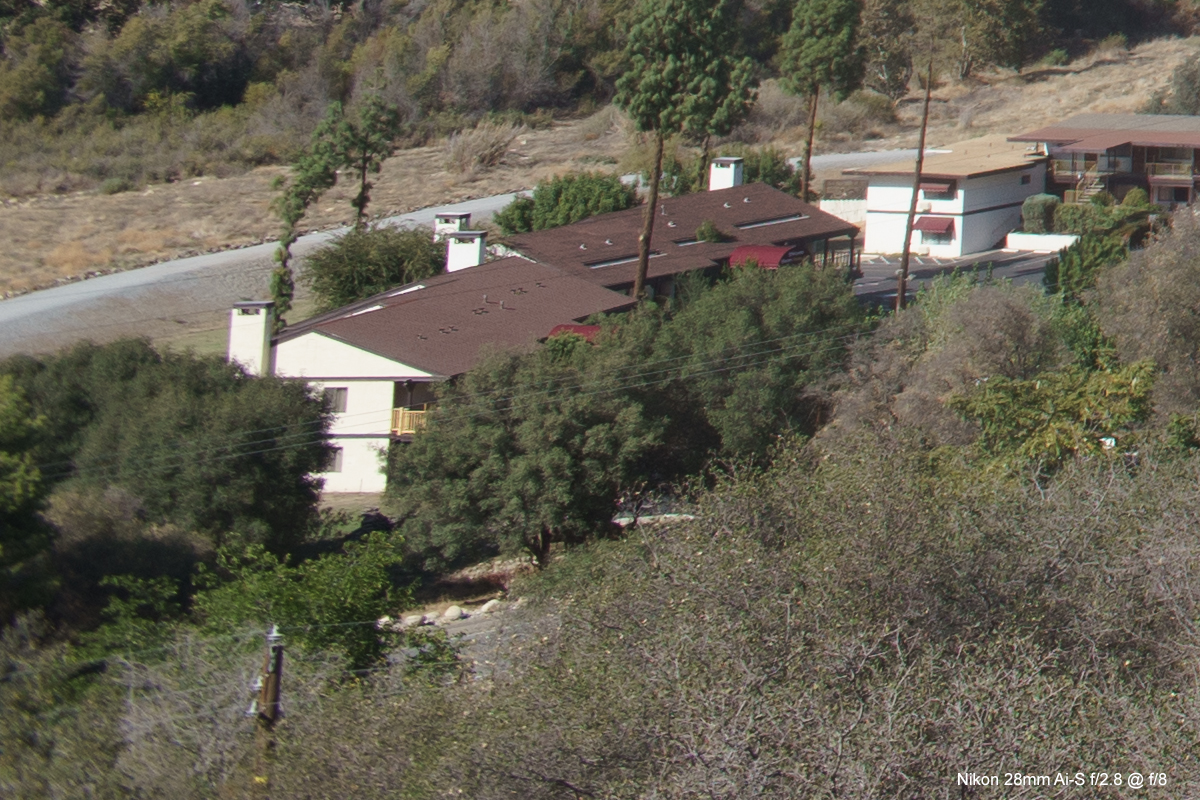 Off center at f/11, because of better contrast the Pentax appears superior. 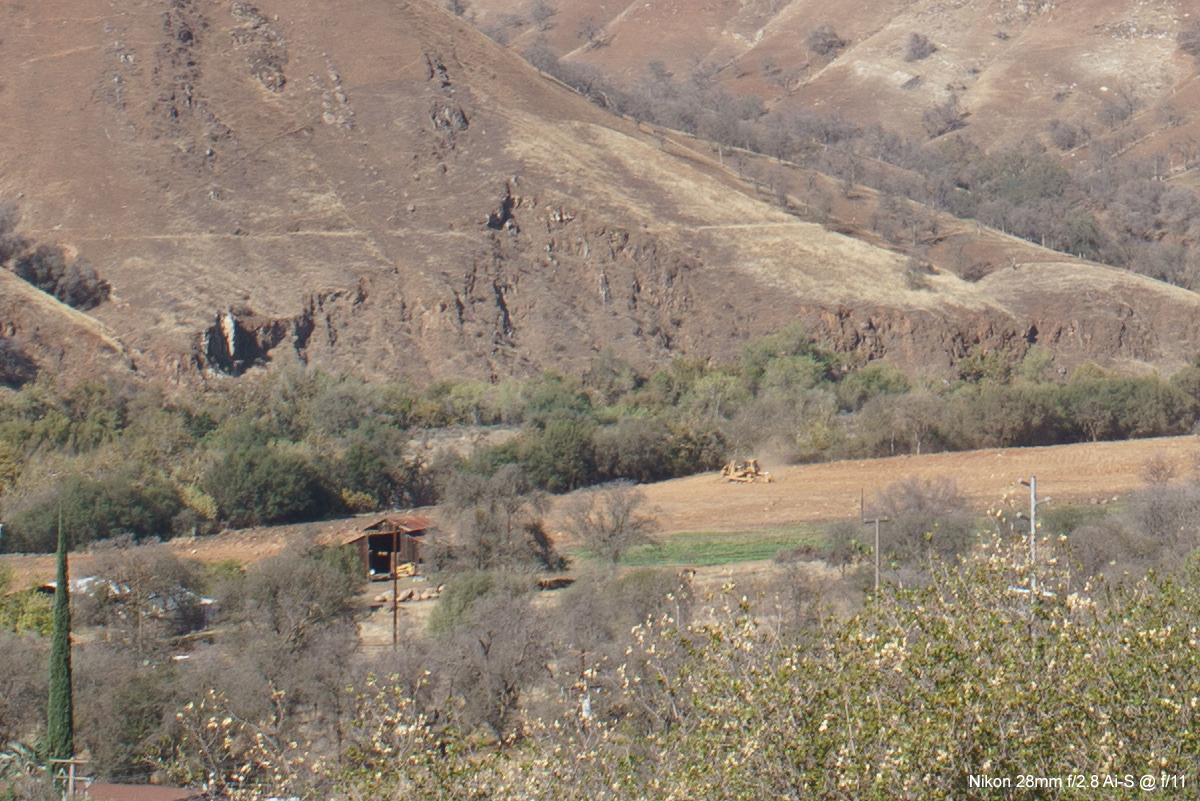 Extreme corners at f/11, the Pentax is the first 28mm lens I've seen hold resolution all the way into the extreme corner at any commonly used aperture. 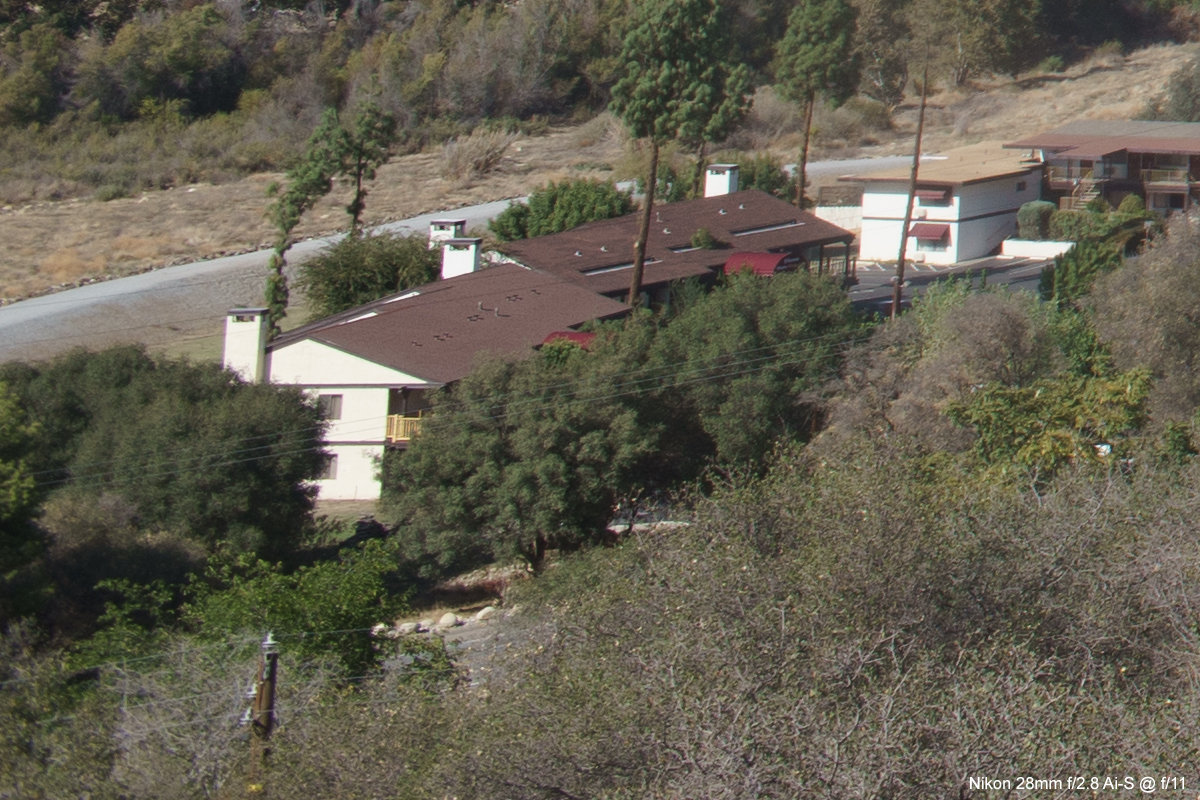 The resolution of fine detail and contrast show the superiority of the Pentax over the Sony FE 28mm f/2, and that's before distortion correction lowers resolution on the Sony. 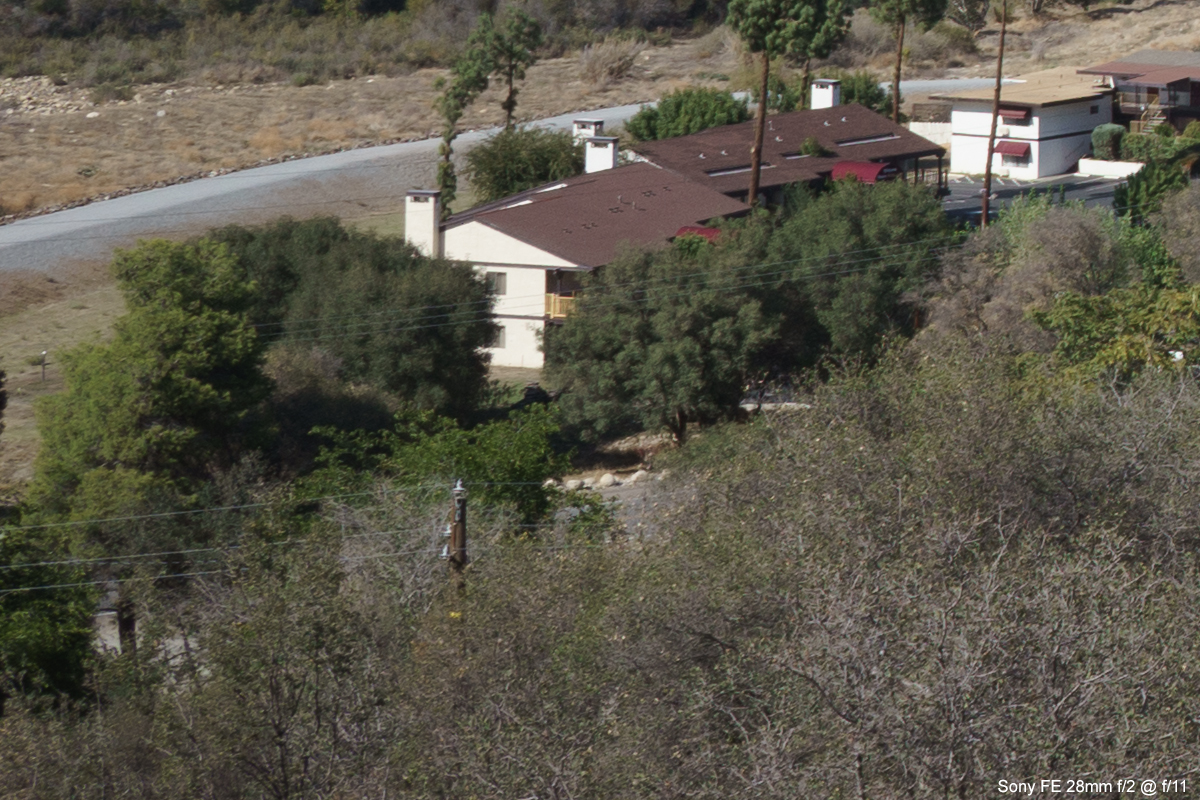 Now let's get into the real deal, photographs this lens can produce. You could say it's very resistance to ghosting, or not at all, I've never seen a lens so sensitive to the angle towards light. 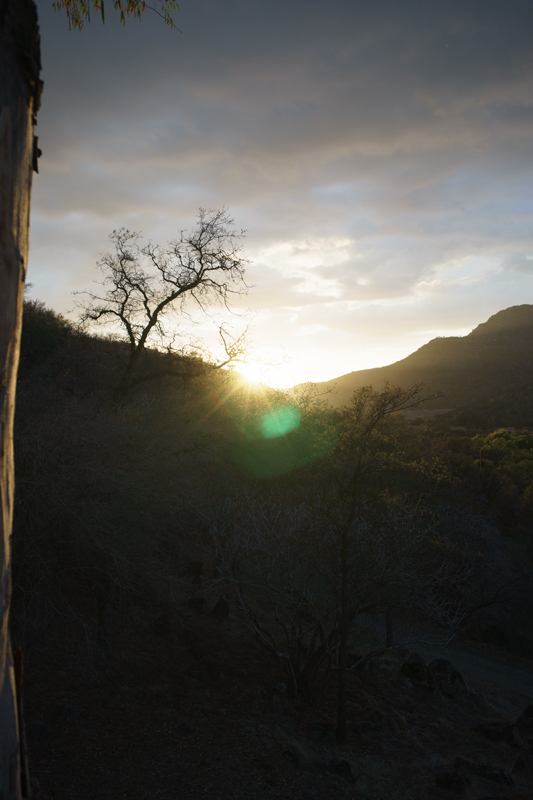 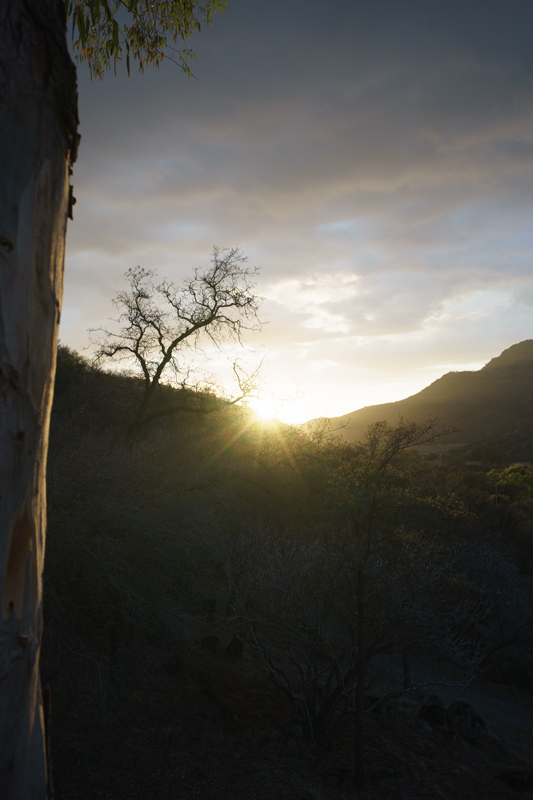 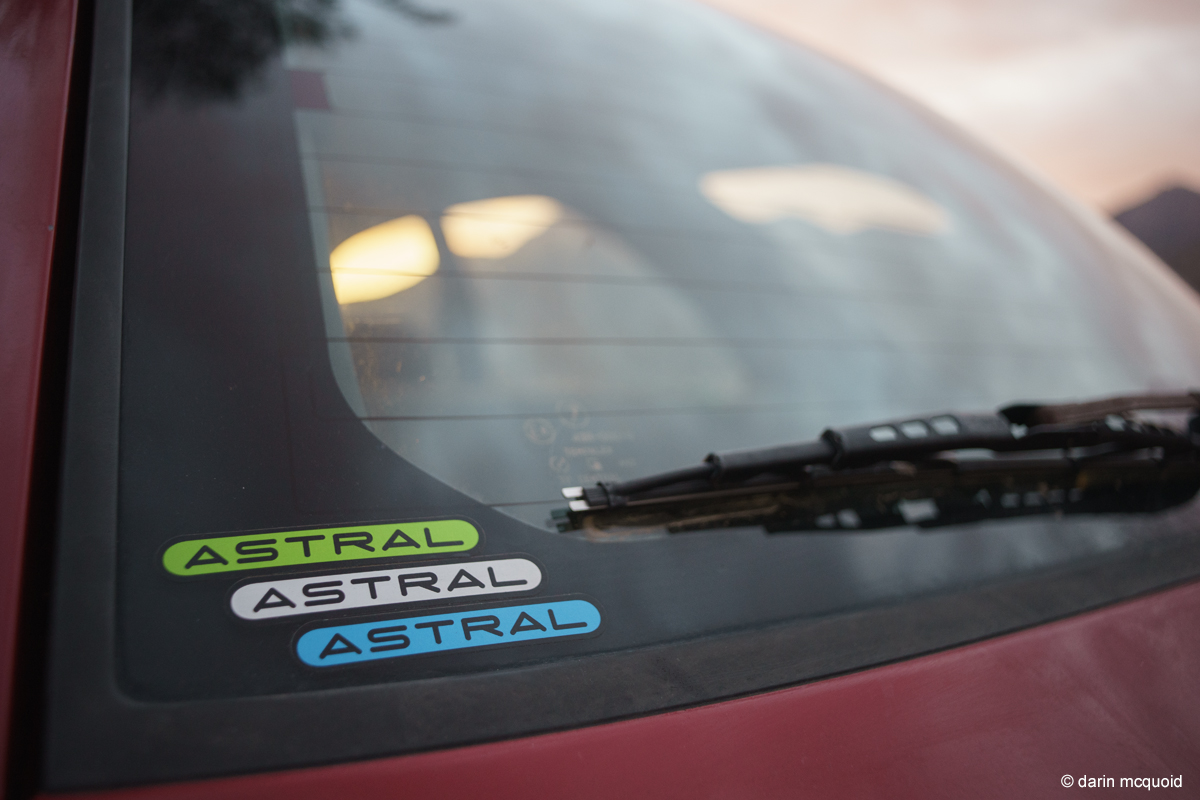 The Pentax SMC 28mm f/3.5 has a well deserved reputation for great color. 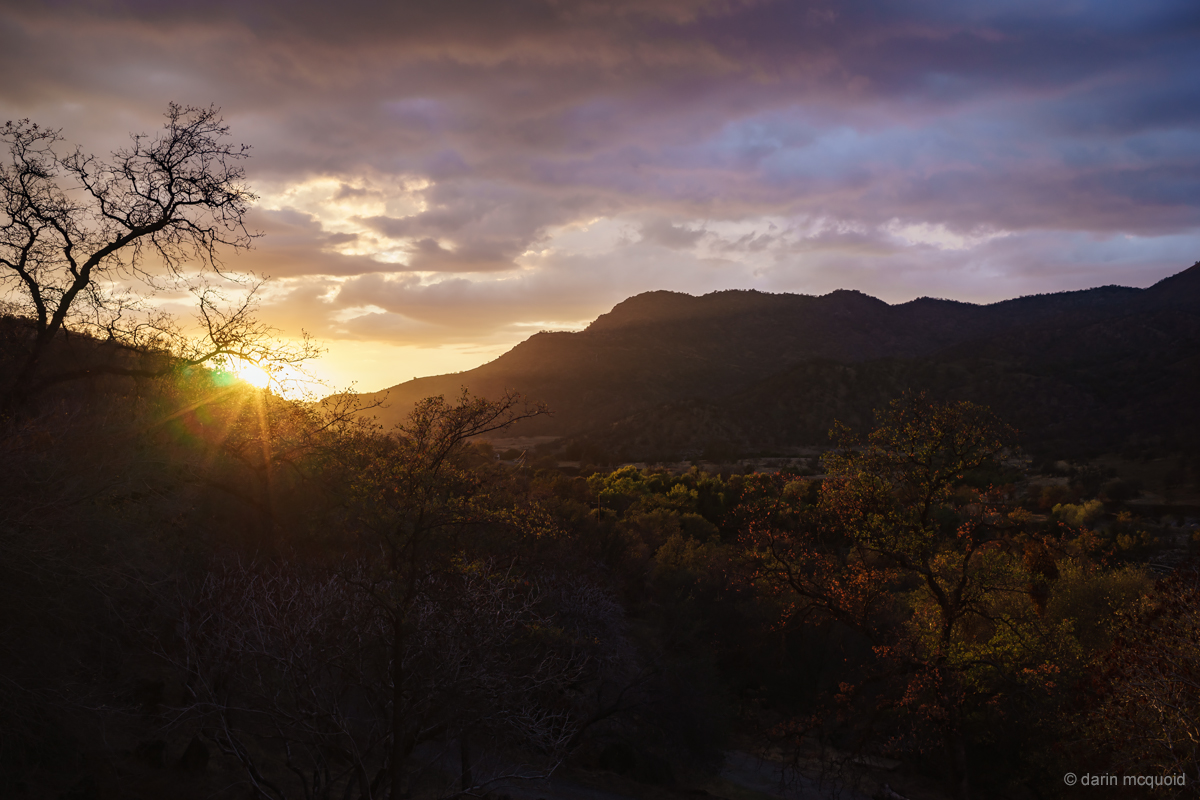 Ok ok but how does it do kayaking? Quite well, even in difficult light, which is the sign of a good lens. 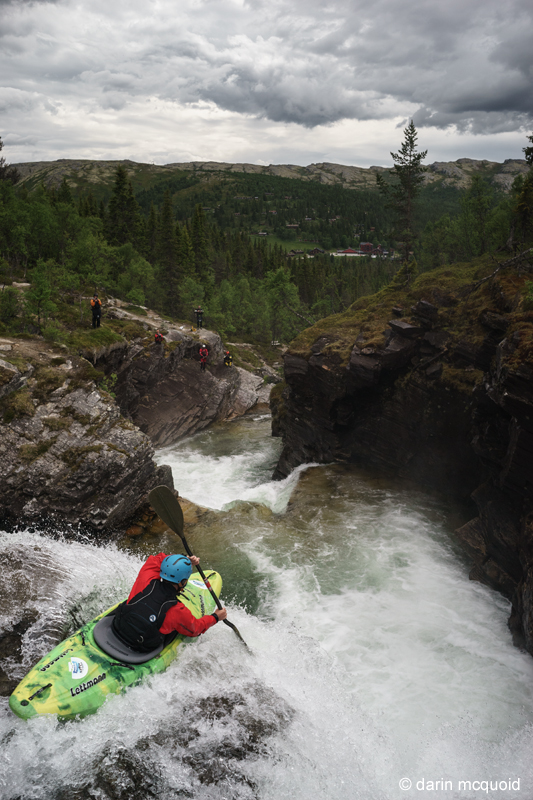 
As a landscape lens this $100 gem far outclasses the $450 Sony FE 28mm f/2. For versatility the Nikon 28mm f/2.8 AiS might beat it due to close focusing distance. For full frame sharpness this is the best 28mm lens I've yet seen. Too bad it's pretty much only usable on old film cameras or something of the Sony A7 series. What's important with this lens is getting the correct version, as there are a lot of inferior ones out there. It needs to be in the Pentax "K" bayonet mount, yet not the Takumar, "M" or "A" version. Look for more info here. For what it's worth, this lens tends to have more depth of field than you expect. Apparently this is a copy to copy variation, but others have reported on it and I can say for sure that it has the most depth of field on full frame of any 28mm lens I've used.